It is certainly true that prior to Chavez coming to power Venezuelan oil was being managed to help the wealthy elite and PDVSA executives more than anyone else. A big part of the Chavez's first 5 years in office were spent fighting to gain control over the State oil company and redirect its resources to Venezuela's poor. This effort by Chavez brought fierce resistance, a coup, and an a oil strike aimed at driving him from office.

Fortunately Chavez prevailed. And by prevailing not only was democracy preserved in Venezuela but Venezuela's oil revenue started bringing big dividends for ordinary Venezuelans.

Some time ago I saw a post put out by the Venezuelan government that summed things up quite well. Fortunately, I just ran across it on the internet and can post it here: 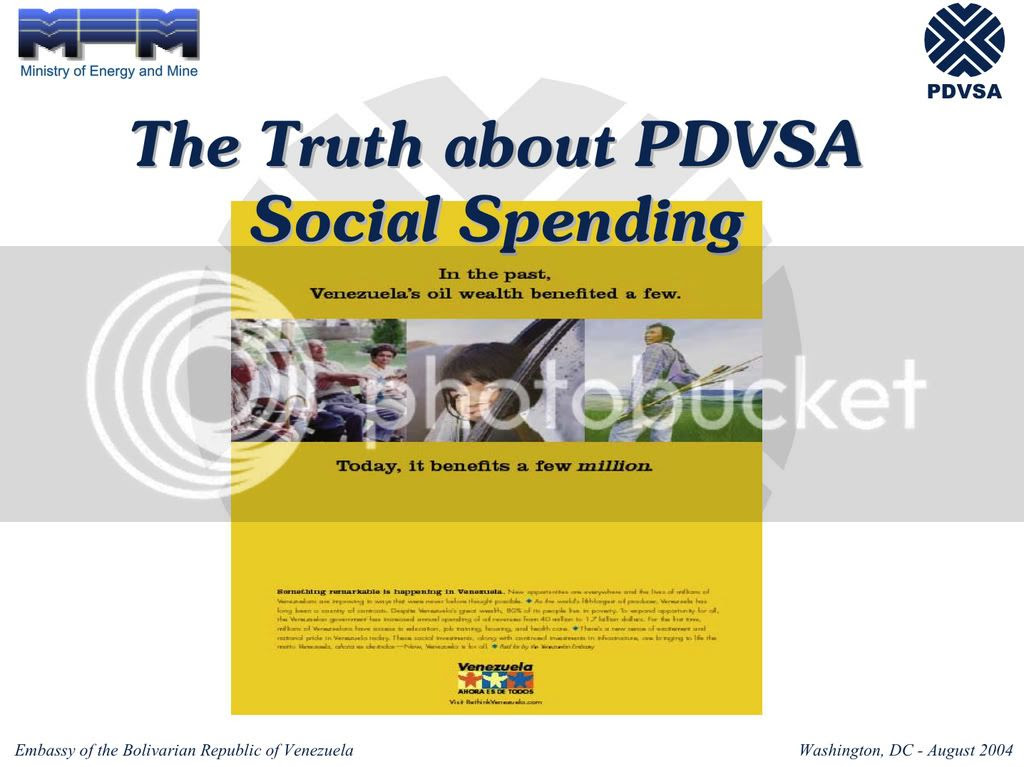 In the past Venezuela's oil benefited a few, now it benefits millions. Indeed. Poverty in Venezuela is down. Income for the poor is up. And much, much more.

The place where I found this also had some other interesting, if a little dated, slides showing how Venezuela's priorities have changed under Chavez: 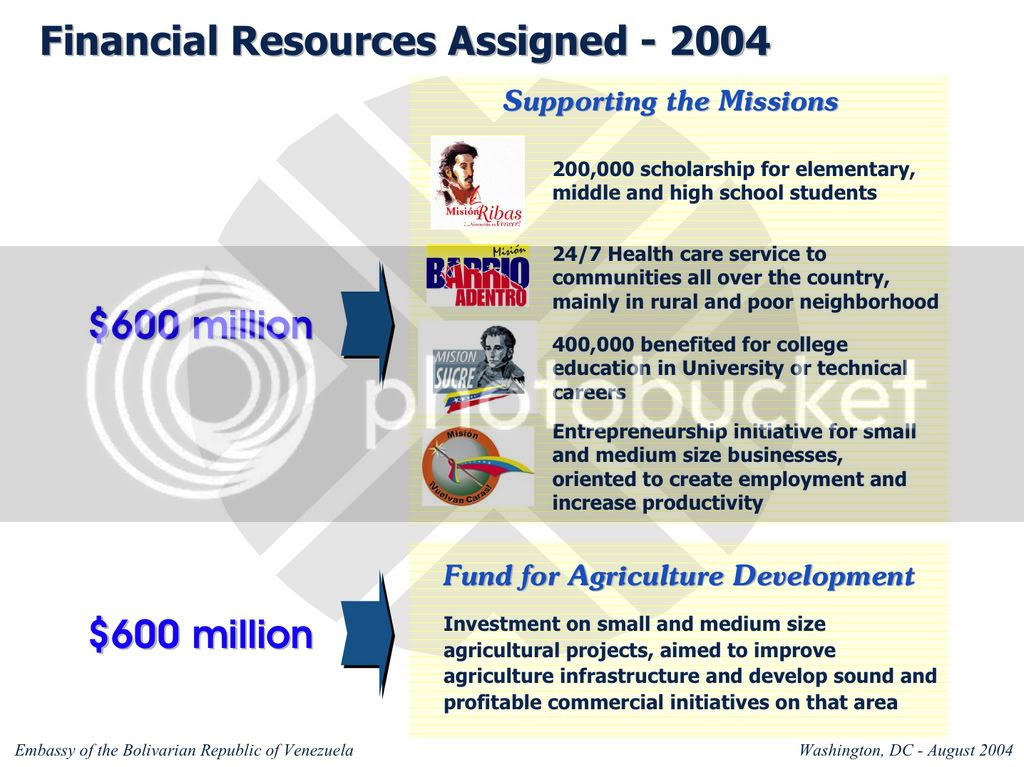 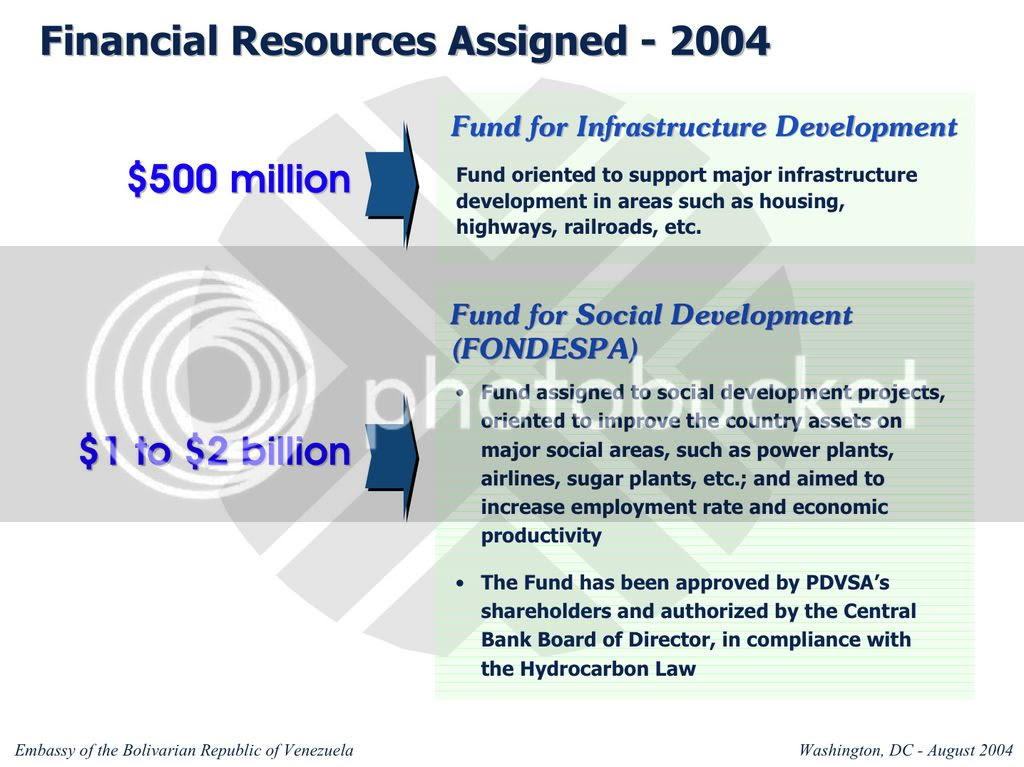 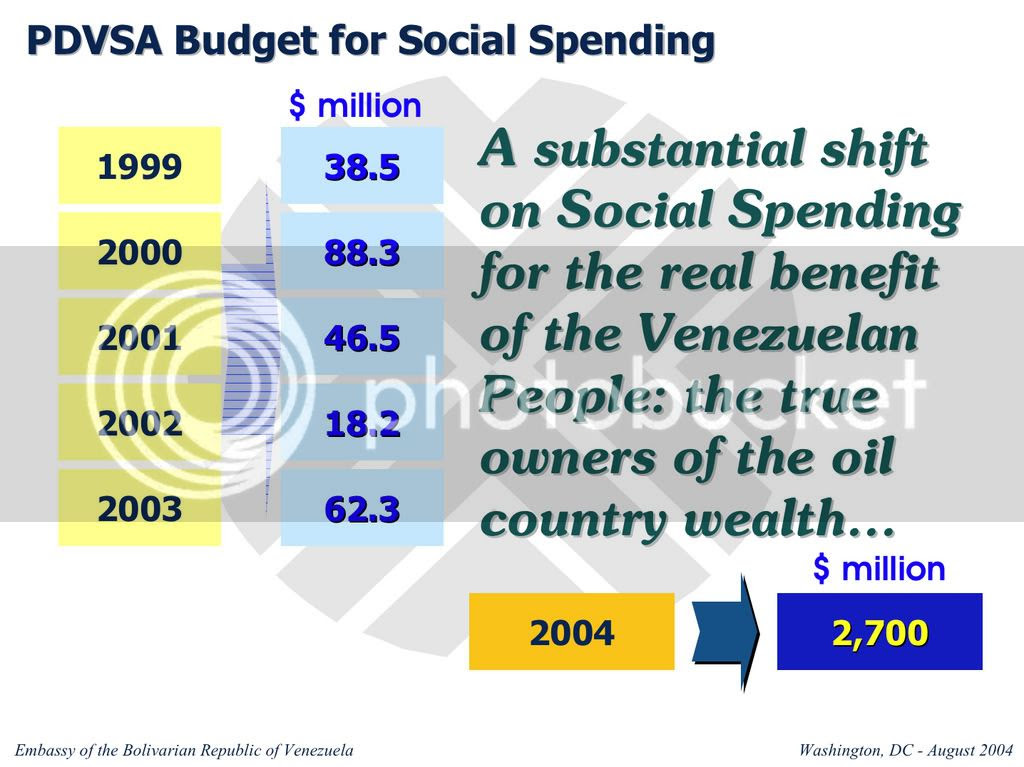 The State oil company is spending much more on social programs than before. One could say, why should PDVSA be doing that? They should just turn the money over to the government and let it be in charge of all the spending. That indeed is a valid point.

But it is indicative of PDVSA's changed mission. Before it saw itself as something above Venezuela and was run principly to benefit its rich managers. Now it is run to maximize revenue to be used to help the Venezuela people. And that has brought about a sea change in Venezuela. For example, just look at this graphic on the HUGE social programs called Missions begun by Chavez: 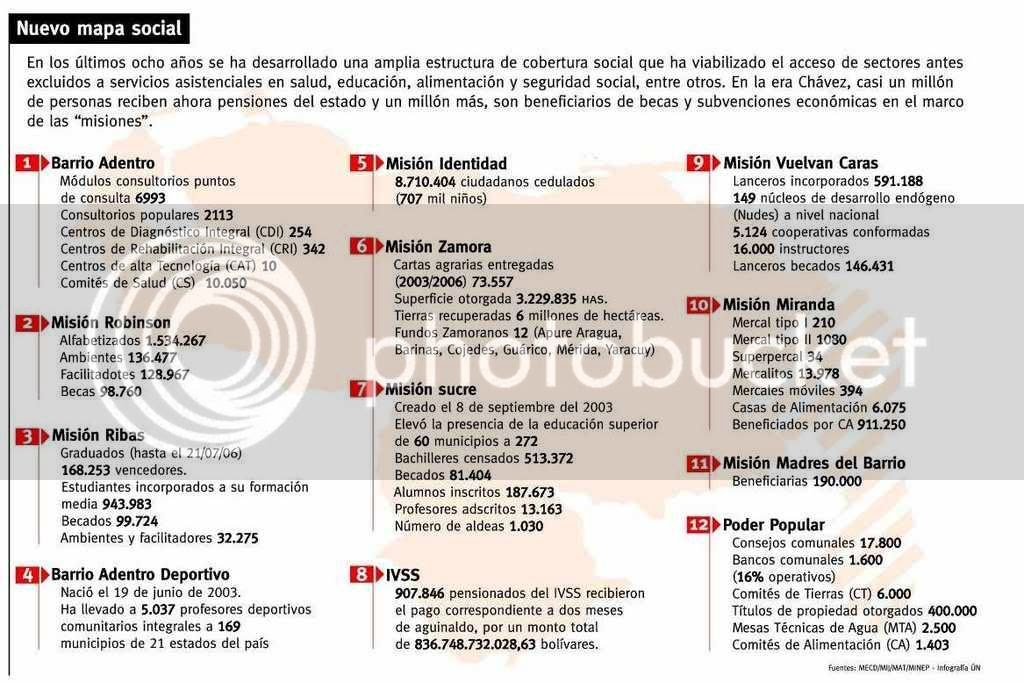 Millions of Venezuelans now get reduced price food, literacy programs, high school equivalency classes, a first chance at college, homeless people are rehabilited, medical care is brought to poor areas, and on and on and on. It is amazing what can be done when you just have a government that gives a damn, isn't it?
|
# posted by ow : 5:57 PM

If you were to listen to the opposition all the public works were just show for Chavezs election - so I guess now they should all have stopped. Except that they haven't.

For example the new bridge between Caracas and the coast seems to be making nice progress: 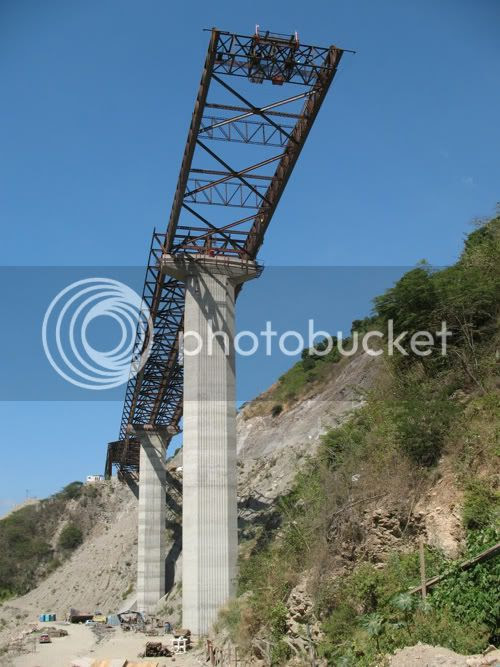 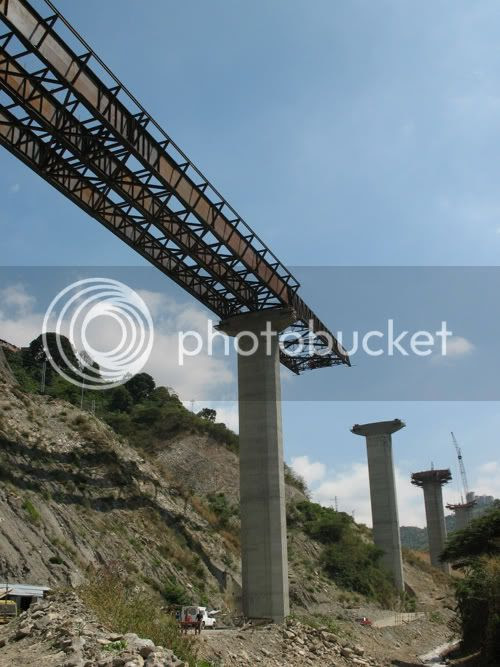 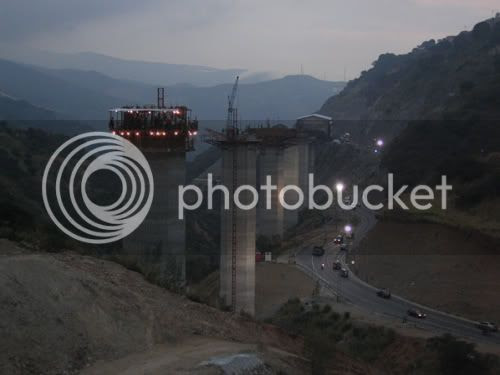 The bridge should be completed by June - in time for the South American soccer tournament being held in Venezuela.

And speaking of the soccer tournament here a pictures of a couple of the many new stadiums being built throughout Venezuela: 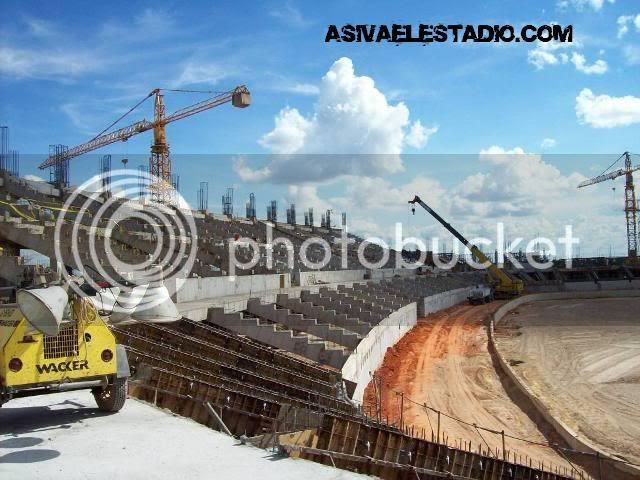 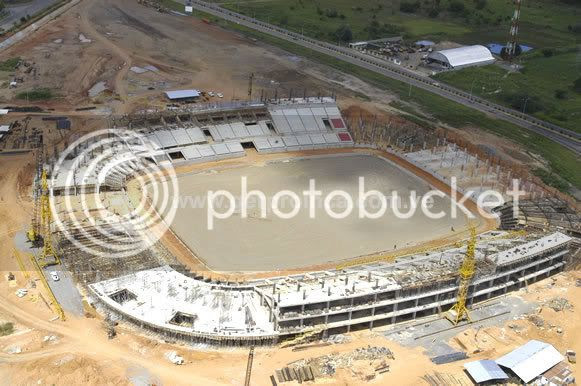 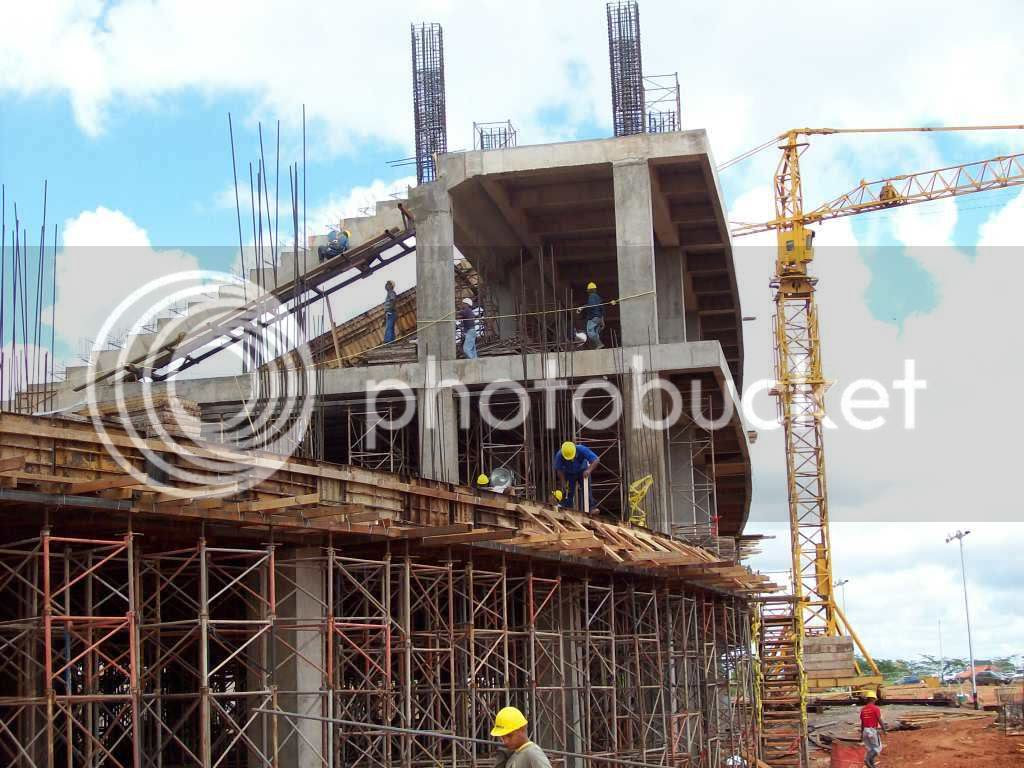 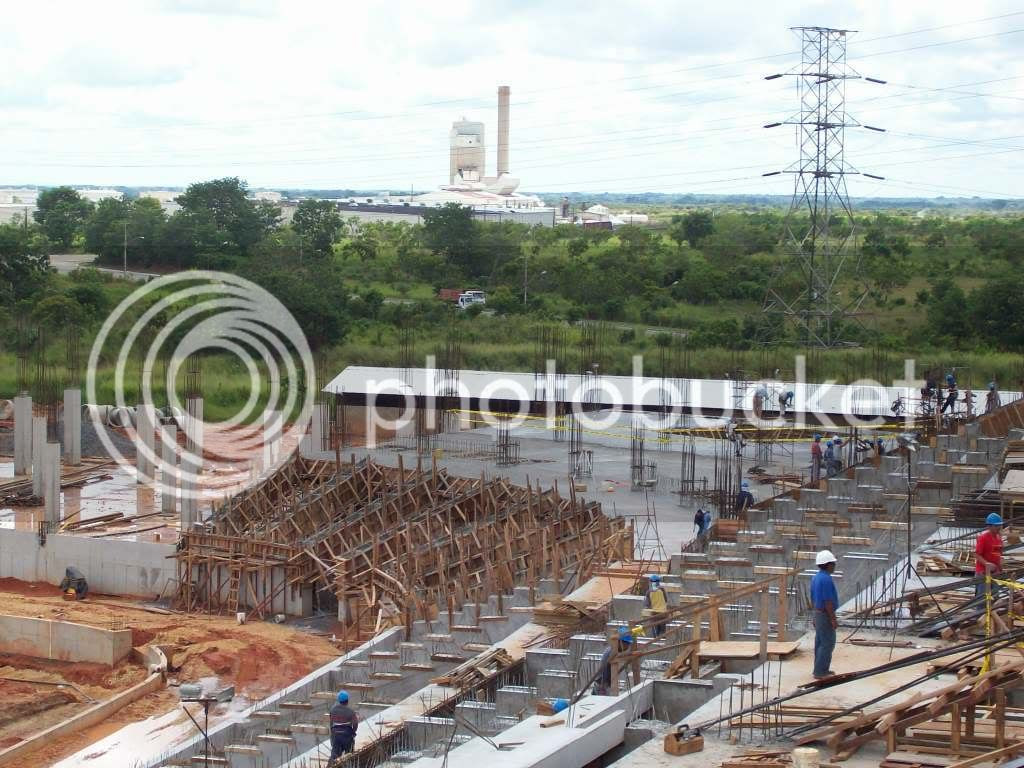 And while it won't be ready for the games the national rail system is making progress. Here are some pictures from the Puerto Cabello - la Encrucijada (Caracas) and Puerto Cabello - Barquisimeto lines which are under construction: 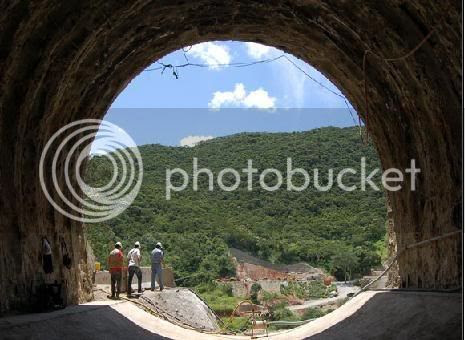 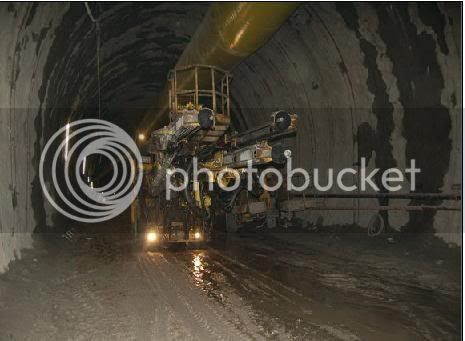 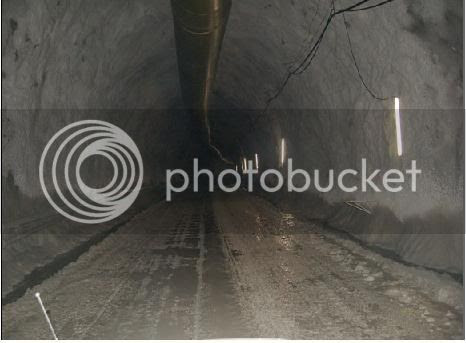 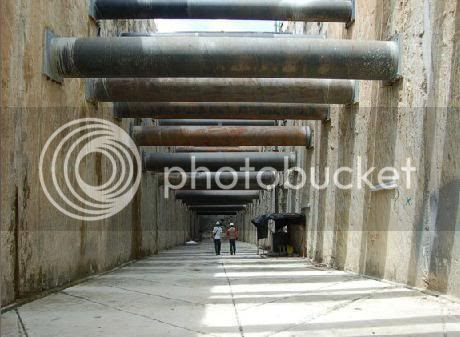 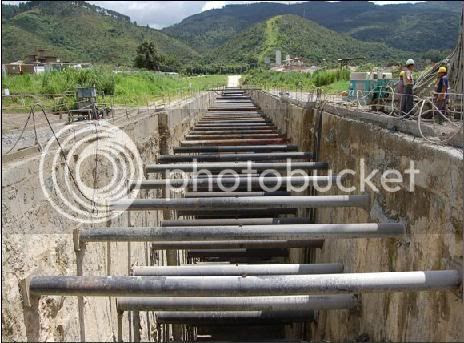 Of course these are just a few of the many major infrastructure projects under way. The elections are over, and Venezuela is moving full speed ahead.
|
# posted by ow : 7:19 PM

The State of the Union address is ussually a boring an uninteresting speech that best serves as a temporary cure for insomia. Yesterdays was no exception - it knocked me out after about 20 minutes.

Yet when I read the transcript this morning I found that there was at least one interesting little tidbit of information. Buried in some boring non-sense about weening the U.S. off of foriegn oil (we've been hearing this for thirty years now) was this:

And to further protect America against severe disruptions to our oil supply, I ask Congress to double the current capacity of the Strategic Petroleum Reserve.

For those wondering what the Strategic Petroleum Reserve is background can be obtained here. Essentially it is a way for the U.S. to have a supply of oil in case its access to oil, and particularly foriegn oil, is disrupted.

This is interesting on a couple of levels. First, it is goingn to cost a pretty penny. With oil currently priced at $50 per barrel and the Strategic Petroleum Reserve currently holding about 688 million barrels of oil doubling it will cost about $34 billion dollars. Then again, the U.S. pisses that much away in Iraq in a few months so I guess by their standards it isn't that much.

The second interesting point is really a question - why do they want to double it? Particularly given that they are supposedly going to reduce their dependence on oil. Doesn't make much sense does it?

Actually, if you look at their recent noise about Iran it does. First Bush calls Iran part of the "evil empire". Then he starts making military appointments clearly aimed at Iran. And now he is doubling the petroleum reserve meant largely to protect the U.S. against losing access to Persian Gulf oil.

Speaking of do nothing legislatures

In recent days the Venezuelan opposition has been falling over itself complaining about the National Assembly in effect ceding most of its powers over to President Chavez through an enabling law. What do we even have a legislature for if they don't do anything they squeal? Seeing as our our opposition friends don't seem to have a grasp of these matters I'm going to be forced to post on this soon.

In the mean time though this related article from today's New York Times caught my eye:

Iraq Parliament Finds a Quorum Hard to Come By

BAGHDAD, Jan. 23 — Mahmoud al-Mashhadani, the speaker of Parliament, read a roll call of the 275 elected members with a goal of shaming the no-shows.

Others who failed to appear Monday included Saleh Mutlak, a senior Sunni legislator; several Shiites and Kurds; and Ayad al-Samaraei, chairman of the finance committee, whose absence led Mr. Mashhadani to ask: “When will he be back? After we approve the budget?”

It was a joke barbed with outrage. Parliament in recent months has been at a standstill. Nearly every session since November has been adjourned because as few as 65 members made it to work, even as they and the absentees earned salaries and benefits worth about $120,000.

Of course, the Iraqi parlamentarians have an excuse for not showing up:

Some of Iraq’s more seasoned leaders say attendance has been undermined by a widening sense of disillusionment about Parliament’s ability to improve Iraqis’ daily life. The country’s dominant issue, security, is almost exclusively the policy realm of the American military and the office of the prime minister.

Party leaders in Baghdad said they had urged their members to attend but emphasized that for many, Parliament had become a hardship post. Representatives who travel from afar stay at the Rashid Hotel in the Green Zone, across a road, two checkpoints and several pat-downs from the 1970s-era convention center. It is not luxurious. It is barely safe. The food is mediocre.

Indeed, what is the point in showing up when the people calling the shots are the ones speaking english and carrying guns? Especially when the food isn't even any good.
|
# posted by ow : 6:22 PM

If Bush I did it, it must be communism

Today President Chavez announced a number of very good measures. One is studying possibly increasing the price of gasoline - something that no president in Venezuela has had the courage to do since an attempt in the late 80s led to turmoil.

He also proposed increases in what are known as luxury taxes:

The last time I can remember when a luxury tax was imposed on yachts, expensive cars, and jewerly it was in, of all places, the U.S.A., and it was done by none other than that infamous communist George Herbert Walker Bush.

Chavez following in the footsteps of Bush senior. I guess that must remove all doubt, the buy is a commie!
|
# posted by ow : 5:56 PM

Look who is afraid of a TV station

The U.S. is well known for not liking media that oppose it. They had their puppets in Iraq throw some networks like Al-Jazeera out of Iraq. They have "accidently" killed more than a few journalists with tank shells and rifle fire in Iraq. During the fighting in Kosovo in the late 90s they blew up Serb TV killing dozens who were inside claiming that the TV station was "a command and control facility" (if you want to see what a TV station that really did function as a "command and control" center you should look at this). They and Israel have worked hard trying to blow up Hezbollahs TV network in Lebanon.

Now they and their puppets in Iraq are working hard to make sure any independent voices in Iraq are knocked off the air:

BAGHDAD, Jan. 20 — The video starts with a young American soldier patrolling an Iraqi street. His head is obscured by leaves, so a red target is digitally inserted to draw the viewer’s eye. A split second later, the soldier collapses, shot. Martial music kicks in, a jihadi answer to John Philip Sousa. The time and place of the attack scrolls at the bottom of the screen.

Such tapes, along with images of victims of Shiite militias and unflattering coverage of Shiite leaders, are beaming across Iraq and much of the Middle East 24 hours a day, broadcast by a banned Iraqi satellite television station that has become a major information center for the Sunni insurgency — and the focus of a cat-and-mouse hunt that has exasperated and infuriated American and Iraqi forces.

Making the situation even more galling for the authorities, American and Iraqi officials say that money stolen from the United States probably helps pay for the station.

“They do not have programs but buffoonery, blaspheming and support for terrorism,” said Jalal al-Din al-Sagheer, a senior member of the Supreme Council for the Islamic Revolution in Iraq, a Shiite party. “The source of funding for the channel is theft.”

Iraqi officials banned the station on Nov. 5, focusing on its anti-Shiite footage and accusing it of “agitating the people against a large Iraqi sect with killing and genocide.” Since then, the station has become a pirate outfit, fleeing new, makeshift headquarters at least twice.

Some top American military officials say they have aggressively tried to find where the broadcasts originate to put an end to them, but so far they have failed.

Baha al-Araji, a Shiite member of Parliament familiar with efforts to cut off the station, said the Iraqi government had also asked Nilesat, the Egyptian broadcaster responsible for transmitting the station via satellite, to cancel its contract with Al Zawra. So far, the company has refused, and the Egyptian government has rejected requests to intervene.

That is what the thugs in the American military and their puppets know how to do - "put an end" to anyone who disagrees with them.

I guess its too much to hope any cable or sattellite channel would pick up this stations broadcasts. Given that YouTube now deletes all Iraqi insurgents videos placed on its site I was hoping some network would have a video of this excellent work by the Iraqi insurgents.
|
# posted by ow : 5:17 PM