One laptop per child?

One of the most distressing moments for the left came this year when Nicholas Negroponte decided to cave in to MS and foreign governments by allowing windows XP to run on the flagship laptop. That decision marginalized the ideals and foundation of the OLPC, that of an education tool running on free software, and turned it into a drug dealer giving a freebie to the developing world.

I really believe this is the future for Venezuela, not insipid details about currency valuations, an educated population could practice communism itself and still be better off than what we are now, the key is always education, you take away the developed worlds education and they fall back into developing status for good (which is no small feat as Germany proved, surviving total devastation and returning to developed status because of their human capital). The OLPC program could provide a perfect medium for children to begin programing at a very early age giving them a leg up on the rest of the world, true change within a generation.

Evidently only govts can purchase this (philanthropists have only given token amounts), and it appears that by mere happenstance Chavez took note, the Portuguese PM offered him their Magellan laptop (which is more or less an intel classmate) and Venezuela is likely to purchase a significant amount. 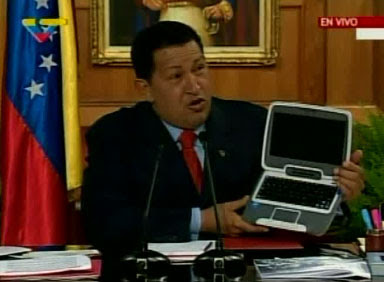 Now despite what the name says the OLPC project since the beginning was about education, not just giving a kid a laptop. On top of a free OS it came with an application/desktop enviroment named Sugar and a slew of other applications designed to teach the student the basics of programing and computer science. I really do hope that the true potential of the true OLPC project is accomplished, even if it is just in Venezuela for now. However I have a hunch that we may limit ourselves to just giving them a glorified office suite and research tool. Next year I will try to make an effort to contact the gov and explain the situation in detail.
|
# posted by Flanker : 7:13 AM