"Now Venezuela belongs to everyone." That is the slogan used by the Venezuelan government and reproduced on the top of this blog. Yesterday an event occurred which showed how apt that slogan is.

The celebration of the International Day against Homophobia respresented an advance in the struggle for the rights of that community. For the first time they commemorated a public act in Caracas's Plaza Bolivar.

In the act they read a decree, signed by the Metropolitan Mayor, Juan Barreto, in which the Venezuelan capital is proclaimed territory free of homophobia, in a step towards equality of opportunities

A little background. Venezuela, like most Latin American countries, has a "macho" culture which has not been particularly tolerant of gays and lesbians. However, Venezuela had made progress in this area and was one of the more liberal Latin countries in this regard.

Unfortunately, along came the reactionary opposition to President Chavez. As with so many other things, they set back Venezuela years, if not decades, on issues of sexual orientation. Opposition hacks think nothing of launching vicious attacks based on sexual orientation (as well as race - but that is for another day) in an attempt to divide the population and weaken the government. The man who signed this decree, Juan Barreto, was himself subject to such attacks last year as he campaigned for office.

Many examples of this could be given but I don't like to give such hateful sentiments too much publicity. So one example will do: 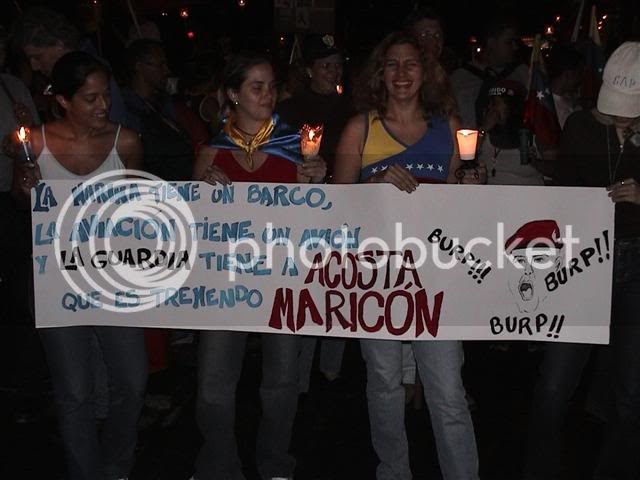 This is a picture from an opposition rally a couple of years ago. The sign which is about a National Guard officer (and current Carabobo governor) reads:

It certainly is depressing to watch what the opposition has tried to do to Venezuela and its people over the past several years. But when one sees events like yesterdays and sees how much courage the citizenry and the government have in the face of this sort of reactionary hatred ones spirits are lifted.
|
# posted by ow : 3:49 PM