How does he do it?

One of the great imponderables for the Venezuelan opposition his how Chavez is so popular after nearly seven years in office when, according to them, the country is coming apart at the seems. The explanations range from the superficial (“it is all based on promises”), to the bizarre (“Chavez supporters don’t believe in rational things like improving their standard of living”), to the ostrich strategy (“most Venezuelans want him out – I don’t care what all the polls say”). What the opposition will twist, and turn, and do anything to deny is the real explanation – that things are getting better under Chavez and that it is this improvement in their standard of living that leads most Venezuelans (over 70%) to support him.

Of course, talking to people in the popular neighborhoods of Venezuela this is all very obvious (of course, most opposition supporters assiduously avoid those areas). And there have been statistical indications that things were improving – the phenomenal GNP numbers and declining unemployment rate. Yet it was difficult to know how exactly those things impacted the most marginalized in Venezuela.

Yesterday, thanks to the good work by the people at Venezuelanalisis, we got to see this quantified. The information actually comes not from Venezuelaanalisis but from Datos, a polling and analysis firm that has been in business for 50 years. Recently they gave a presentation at the U.S-Venezuelan Chamber of Commerce (a highly anti-Chavez forum) where they presented some interesting data on the composition of Venezuelan society.

First some background. When analyzing the economic stratification of Venezuelan society Venezuelan’s break the groupings into different letters with A being the upper classes, B upper middle class, C middle class, D working class and/or poor, and E very poor. So in giving the presentation Datos used these categories and gave background on each of them, their size, income, common items owned, etc.

Knowing this lets look at some of their slides: 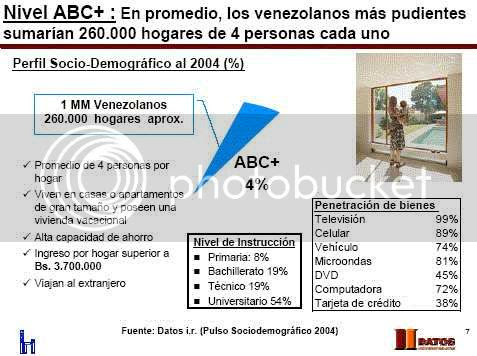 The first slide give background on groups A and B, which are upper class, and the upper part of group C, which would be upper middle class. This segment is made up of 1 million people (out of 25 million Venezuelans you can see it is quite small). They own large houses or apartments, vacation homes, and travel abroad. The appliances and goods that they own need no translation and you can see what percentage of these households have them. 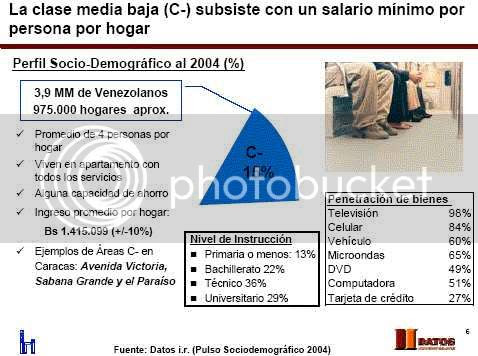 This slide shows the lower part of group C, or the lower middle class. This group is made up of 3.9 million people. They live in fully appointed apartments and have some ability to save.

It should be noted that the two groups shown so far comprise most of the opposition. Together they are almost 5 million people or 20% of the Venezuelan population. Being such a small minority it is easy to see why they haven’t won an election in a while. 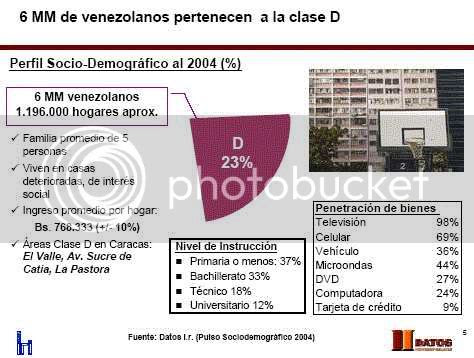 This is group D which is made up of 6 million people. It has a larger family size than the upper class, 5 versus 4. They tend to live in poor quality public housing and have a very limited ability to save. 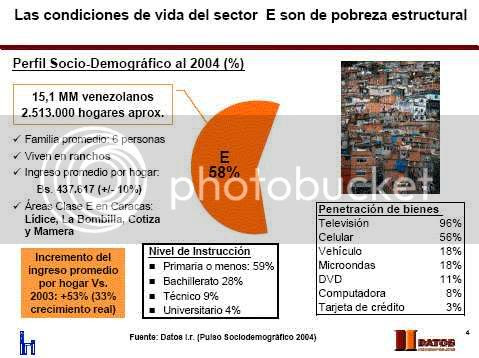 This is group E which is the poorest segment of Venezuelan society but also far and away the largest being made up of over 15 million people. Households are big with an average of over 6 people. Household cash incomes are low at less than $200 per month.

However, this slide also holds the key to understanding Chavez’s high level of popularity. In the lower left hand corner it says:"Increase in the average household income versus 2003 53% (33% in real terms)". In other words in 2004 the people in this group saw their incomes go up by a third even after inflation.

How is that possible? Partly the economy grew at a very high rate of over 17%. But that doesn’t seem to be the whole story. The other part is the huge social programs, called Missions, that give fee medical care, inexpensive food, educational opportunities, and stipends to millions of people. The Missions were begun under Chavez and he has spent Venezuela’s oil windfall funding them with billions and billions of dollars. It is this cash and non-cash assistance that has undoubtedly played a major role in the dramatic increase in the standard of living of Venezuela’s poor.

Whereas before the oil wealth of Venezuelan was simply looted by the people in groups A, B, and C and wound up in overseas bank accounts now it is spent where it is most needed in Venezuela to the benefit of millions and millions of people. And with this the mystery of Chavez’s sky high poll ratings is solved
|
# posted by ow : 3:37 PM