Critical Point, And Its Aftermath

Last Wednesday the United Nations released its Millenium Goals, Human Development Report for 2005, prompting criticism by some opposition over the the decline in standig in some indices of human development. This in turn prompted a closer look at the time period the report encompasses. Education minister Aristóbulo Istúriz cited that the figures were from 2002, and that these figures did not take into account the devastating strike that crippled the nation and its society along with it and Venezuelas decline in the Millenium Goals standing:


"Education Minister Aristóbulo Istúriz, the head of the ministerial cabinet's social team, noted that the 2002 infant mortality rate of 17.3 per 1,000 live births was cited "without mentioning the political events that had an impact on that statistic."

In April 2002, Chávez was removed from office for two days by a short-lived coup d'etat, and in December of that year, the opposition movement began a two-month general strike that brought the oil industry - the backbone of the Venezuelan economy - to its knees and caused economic losses of more than 10 billion dollars.

Istúriz and Health Minister Francisco Armada visited ECLAC headquarters in Chile in July to protest the U.N. regional body's evaluation of Venezuela's compliance with the MDGs."

Is there any truth to claim that the period of time in question was a turning point in Venezuelan Society? it is important for the reader to understand the time frames involved. Therefore we will resort to an unbiased online encyclopedia outlining the events.

In November 2000, Chávez backed a bill through the legislature allowing him to rule by decree for one year. In November 2001, Chávez passed a set of 49 laws by decree, shortly before the enabling law expired, including the Hydrocarbons Law (about oil) and the Land Law. (For more on these laws, see policy below.) Business federation Fedecámaras vehemently opposed the 49 laws and called for a general business strike on December 10, 2001.

In December 2000, Chávez put a referendum on the ballot to force Venezuela's labor unions to hold state-monitored elections. (For more, see below.)

On April 9, 2002, Venezuela's largest union federation, the Confederación de Trabajadores de Venezuela (CTV), led by Carlos Ortega Carvajal, called for a two-day general strike. Fedecámaras joined the strike and called on all of its affiliated businesses to close for 48 hours. (Footage available via Edonkey p2p network [2]).

On Thursday, April 11, an estimated half million people marched to the headquarters of Venezuela's oil company, PDVSA, in defense of its fired management. The organizers decided to re-route the march to Miraflores, the presidential palace, where a pro-government demonstration was taking place.

With that done lets take a look at the outcome of those actions:

It is my opinion that these numbers speak for themselves, but a brief analysis may be warranted. The trend prior to the current Venezuelan administration was for a decrease in poverty. Upon taking control in 1999 the governement followed through on the prevalaent current that was leading to improvement in poverty reduction. This is highlighted by the rise on non-poor and a decrease in poor during the time periods 97'-00'. The numbers show a dramtic shift in the following years incorporating the years 01'-03'. In this time period the incidence of poverty(incorporating poor and extreme poor) rose siginifcantly. Concurrently the incidence of non poor dropped significantly. It is not mere coincidence that the drop in poverty and the rise in non poor coincide directly with the general strike. Its effects ripple on the social indices, with its impact much more devastating on those who cannot recover as easily as those who have access to resources. As shown by the numbers above regarding to non-poor they are the first to recover, those who have a social network that can alleviate the stresses of poverty. The same cannot be said for the poor or, extreme poor, who in the ensuing years only feel the effects harder. These numbers tell the tale of the devastation of the strike. Those who had access to resources could absrob the incoming shock, helping family members in the act. Those who had nothing, who had no one to turn to for help, suffered the most and in many cases are still suffering. Given this reality the government has sought to right the wrongs after being vindicated in the recall referendum. Yet there are still opposition elements that seek to take away what little these survivors have gained when they argue against the social programs that specifically target the poor. Of course there is outcry over the presentation of data that does not portray the situation as it truly is. All the parameters that make up the equation have not been presented fully.

Can the governemnt do more? Yes it can, there is no doubt about it. Particuarly when it comes to the housing it promised. BUT when it comes to taking all the factors into account in making good solid judgements of the condition of the Venezuelan state the strike and the coup are sorely missing among governemnt detractors. It is as if it never occurred or they never had a hand in the condition of the state. so when taking into account the medias portrayal of the Un report remember the factors that brought this condition forward and to who it is owed to. You, the reader, be the judge.

Here are some graphs which may better illustrate the above points. Again, notice the clear positive trends until the coup and strike attempts. Only now is this being recovered from. 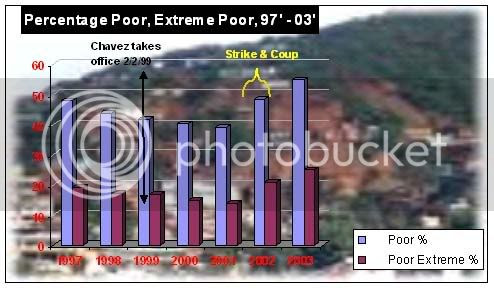 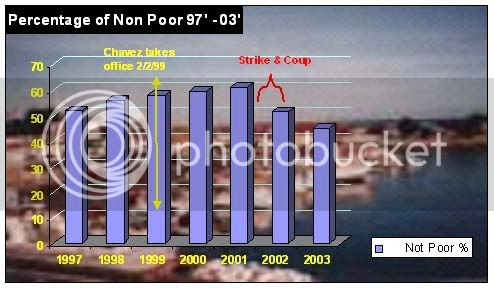