A couple of weeks ago I did a post showing how according to the Venezuelan National Institute of Statistics (I.N.E.) poverty has now been decreased to below the levels of when Chavez first came to office. This accomplishment is all the more significant due to poverty having been artificially increased by the opposition coup and economic sabotage in 2002 and 2003.

Of course, the opposition types were not at all happy with the new numbers as they make the Chavez administration look, well, good. So they immediately set out to attack them. First they claimed that they were calculated using new metrics and therefore not at all comparable to the old numbers. But then one of them called up the I.N.E. and found out they were indeed calculated using the same metric as before – income. Then we were told they weren’t valid because we were just given them in newspaper interviews and they weren’t published on the I.N.E. web page, so presumably the government was hiding something.

This last, and rather bizarre, accusation prompted me to look at the I.N.E. web site and there they are – in a report under the “Indicadores Sociales” section. The report talks about the new poverty reporting system that is being worked on but also gives the current statistics and how they were calculated. So lets have a look: 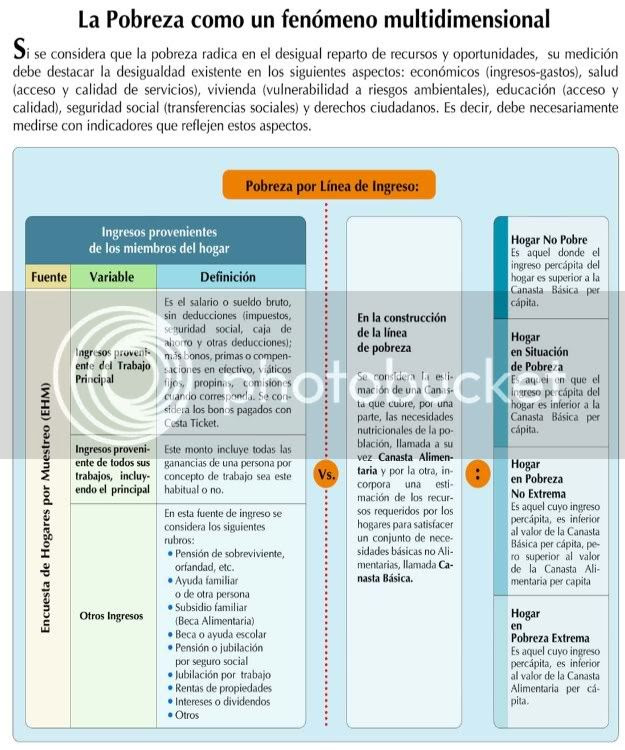 This report, entitled “Poverty as a multidimensional phenomena”, starts off describing how a true measurement of poverty should include not only direct income but other benefits such as health care, education, housing and other factors.

It then goes on to describe how monetary poverty is defined and calculated. It is calculated based solely on income. According to the chart, income includes gross salary and any job related reimbursement, bonuses, tips, and commissions. It also includes such non-job income as interest, dividends, financial support from your family, scholarships, pensions, and rent from property among other items. All this is added up and it determines how much a persons income is.

So as this table shows the computation of poverty is very straightfoward – tabulate a families income and then see how that income compares to the various baskets to determine if a family is Extremely Poor, Poor, or not poor at all. This then leads us to the next page in the report: 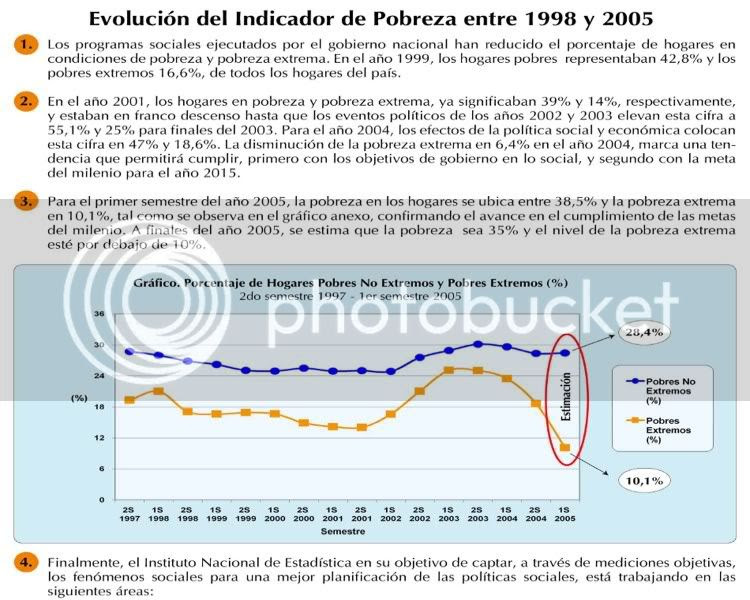 In this page we first see a graph showing how Poverty and Extreme Poverty, as previously defined, have evolved since 1998. The gold colored line shows the percent who are extremely poor and the blue line shows those the percent who are poor. Please note it matches the table given in my previous posts and again shows the trend of poverty being reduced during Chavez’s first years in office, it shooting up during 2002 and 2003 as the opposition sabotaged the economy, and now going down again as the economy has been revitalized.

To some up, here is what we have learned over the past few weeks regarding poverty numbers in Venezuela. First, while new poverty metrics are being devised to take into account many of the new social programs such as Mercal and Barrio Adentro poverty is still being calculated the way it always has been – solely based on monetary income versus the amount of money needed to purchase basic goods. Using that measurement poverty trended down during the first several years of Chavez’s tenure as he implemented social programs and boosted oil income. Poverty then shot up sharply as the opposition coup and oil strike sent the economy into a depression. It is those higher numbers from 2003 that the opposition keeps trotting out in their haste to make anti-Chavez propaganda. However, as can now be seen, since the Venezuelan economy began its revitalization in 2004 poverty has dropped sharply and is now below the levels of when Chavez took office in 1999. And given the Venezuelan economy’s continued strong growth and the massive social programs being implemented it is reasonable to assume poverty will continue to decline significantly.

So Chavez has done exactly what he said he was going to do when he campaigned in 1998. He has fought poverty implacably. And it is clear that while poverty is far from being eradicated this war against poverty is one that Chavez and Venezuela are winning.
|
# posted by ow : 4:11 PM