The open book that is PDVSA

In the ongoing propaganda war against President Chavez one of the opposition claims is that somehow Venezuela’s state oil company PDVSA is not forthcoming with information. This is completely false. PDVSA through its web-site and information bulletins published in newspapers providers more information to its owners, the Venezuelan people, than ever before. As an example below is a copy of the information bulletin published today by PDVSA in Venezuela’s largest newspaper, Ultimas Noticias. Today’s topic was the changing of the operating conventions (more on that later).

These bulletins, which are generally published two or three times a week have covered every conceivable topic related to PDVSA – from its financial performance to its production, from its overseas operations to its labor force, from its recovery from the “oil strike” to its participation in various social programs.

And of course we just recently saw that the some of the information published in these bulletins, namely its production numbers, was true all along while the lower numbers given by the Venezuelan opposition turned out to be erroneous. It is this supply of timely, revealing, in depth, and ACCURATE information that makes PDVSA an open book for the people of Venezuela. 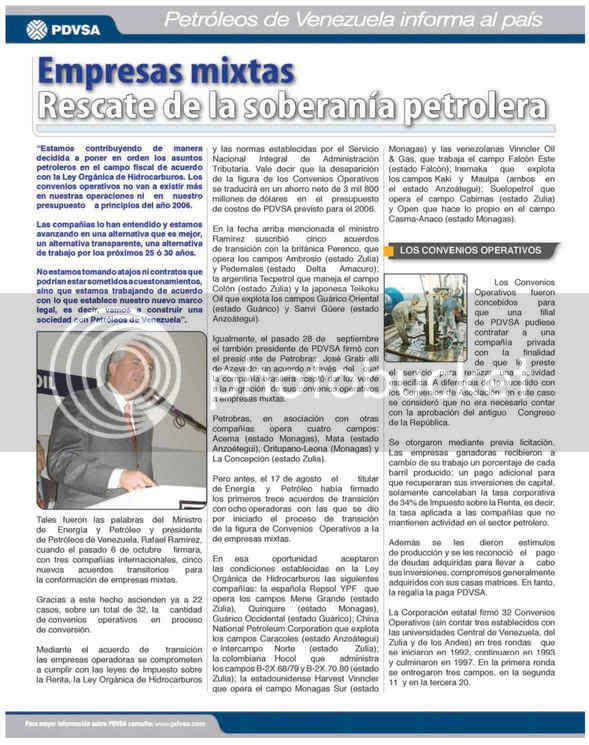 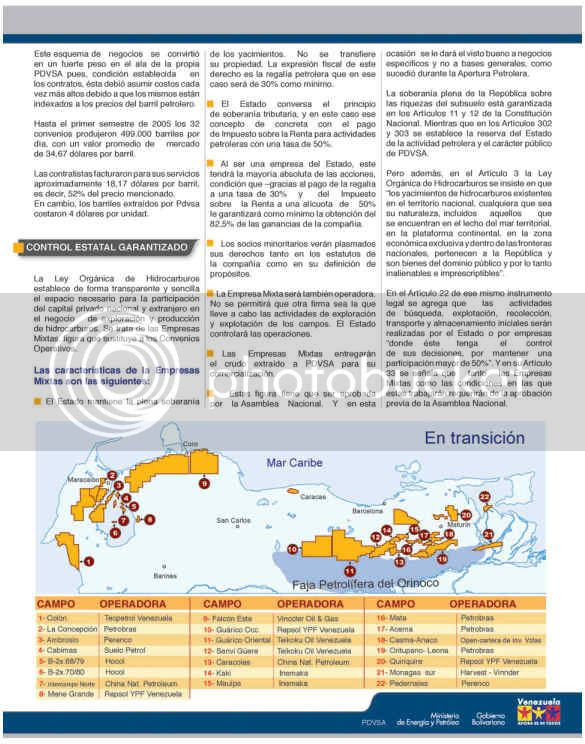 Now what exactly are “operating conventions”? They are special agreements that the Venezuelan governments prior to Chavez negotiated with foreign firms to come in and operate older oil fields that Venezuela supposedly didn’t have the technology to operate. In exchange for operating these fields these companies would be reimbursed by Venezuela (PDVSA) for all their costs and were subject to very low tax rates on their earnings. Currently these “operating conventions” account for 499,000 barrels of daily production out of Venezuela’s total of over 3 million barrels.

Now if you turn over oil fields to private companies and tell them “don’t worry, well pay you whatever its costs to get the oil out of the ground” what do you think will happen? You guessed it – costs will be inflated and vastly overstated. For example, it costs PDVSA about $4 per barrel for its own in-house production. How much do the private companies say their costs are - $18.17 per barrel. Now the fields operate by those companies are more challenging and so it is natural that their costs will be higher. But $18 is way out of line. Just to show how out of line it is the extra heavy crude of the Orinoco Belt costs about $9 to produce and that oil is much harder to extract and has to be upgraded at special refineries. So the $18.17 is clearly inflated and is just a way for these companies to fleece PDVSA. And PDVSA has had no choice under the contracts negotiated by the previous governments but to pay that outlandish rate. This year PDVSA has to pay out $4 billion to these companies so if even a third of this cost is overcharging Venezuela is losing well over a $1 billion per year. Clearly this was something crying out for change.

Now here comes a little irony. In December 2002 the old PDVSA management, the same one by and large that negotiated these outrageous deals, went on “strike” to try and oust Chavez. They failed and were all fired for their refusal to work. So now that they are out and a new and more nationalistic management is in place (the government often refers to this as the “true nationalization of PDVSA”) PDVSA finally had its chance to change this. The main part of this change, besides other tweaking like imposing higher tax rates and aggressively collecting past taxes, is to force these companies to become joint ventures with majority PDVSA ownership. By PDVSA having ownership over these operations it gets to control them and their costs. There will no longer be a way for a private management to pad costs and rob Venezuela of money.

Now of course, there has been a lot of bitching and moaning about this from the usual suspects living in eastern Caracas not to mention the foreign companies themselves which are loath to see such a good deal disappear. But what can we say, all good things must come to an end. In any event about 22 of the 30+ companies involved in these operations have already signed on to these changes. And what about those who don’t companies who don’t want to accept these changes. Well, those dead enders (as Rumsfeld would say) will simply have their entire operations expropriated by PDVSA and that will be that. So I suspect they’ll manage to work something out.

So as can be seen not only is PDVSA more open and transparent it also is for the first time almost since its inception truly operating in Venezuela’s best interest. It is amazing what can be accomplished when you finally have leadership that is forceful in doing what is best for the country. The days of the vendepatrias are gone, hopefully for good.
|
# posted by ow : 1:04 PM