The people who I have been staying with outside of Barquisimeto Venezuela live in newly built government housing. This has given me a great oppertunity to see from the inside what type of housing the government is building for low income Venezuelans.

First, let me say this will NOT be about housing policy in Venezuela in general. That is a bigger subject. Further, it is widely acknowledged that the construction of housing for low income people has been a signicant shortcoming of this government. They just have not gotten enough built. All that is a topic for another day. Rather this is just an up close look at what the housing that is being built is like.

The people that I am with who are getting this free government housing are being re-located from a slum are near downtown Barquisimeto along the Rio Turbio. They are being re-located so that area can be bulldozed and turned into a park. Other residents of this housing project were displaced flood victims from the state of Vargas.

The project itself consists of 400 units each in 4 different gated mini comminitues for a total of 1,600 units. About half have been built already with many others in construction. The communities are completely walled off and entrance is only through a gate with 24 hour security. From what I saw and heard the community is completely save and there is almost no crime. People leave there doors not only unlocked but actually open most of the time and casually walk in and out of each others housed to socialize (there sure is something to be said for the Latin culture).

Here is a picture of some of the units under construction: 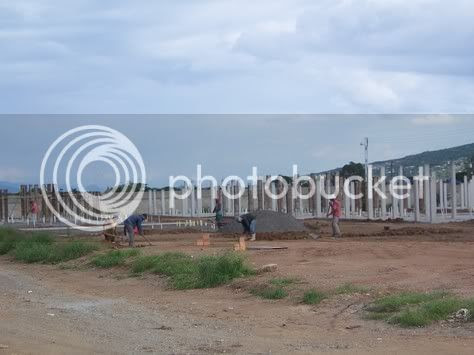 Note the backbreaking manual work. This is still a very underdeveloped country. Also, note the houses are made from concrete and cinderblock.

Here is what a fully completed house looks like: 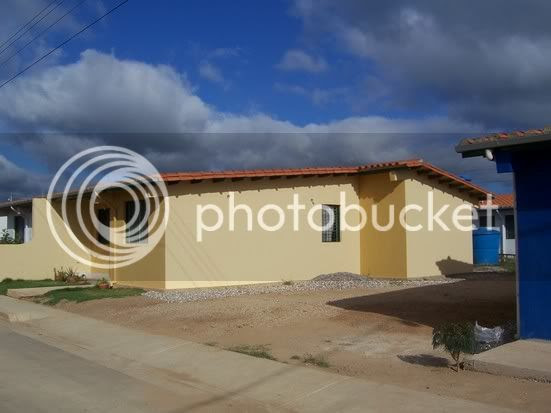 The houses are quite spacious in side. While not large there are three bedrooms, two bathrooms (both with showers), a combined living room/dining room and a kitchen. 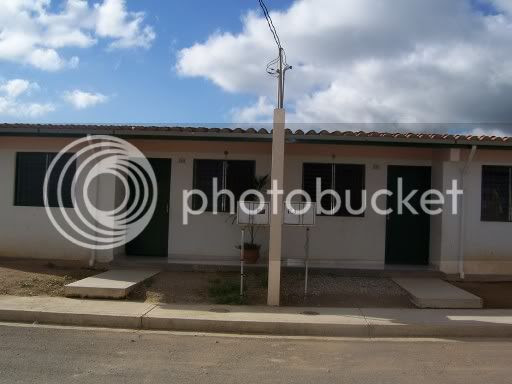 This is a frontal view of two houses side by side. All units are identical in layout and come in this rather ugly white color that gets quickly dirty as the area is very dirty and dusty. However the houses don´t stay like this for long as we will see next: 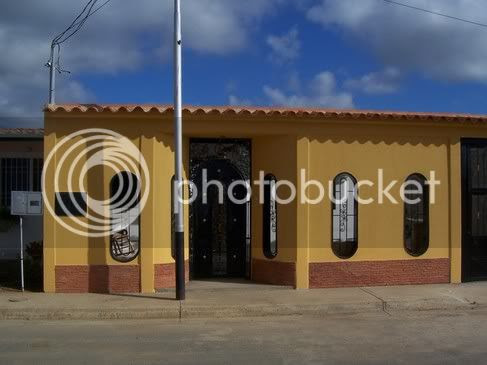 Note this house is exactly the same base house as the others but the people living there have built additions to it such as this front gate. Plus they have painted it on their own. Virtually every occupied house had construction under way as people were building on extra rooms little by little as they could afford to buy the materials. So a lot of these houses will be quite good size when all is said and done. 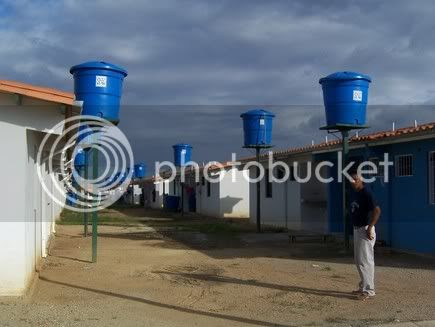 This is looking down a back ally between rows of houses. Note all the blue water tanks. There is no piped in water system. All water comes from tanker trucks that bring it every week and fill up those tanks. The cost is about $4 per tank. This also explains why most open space is just dirt rather than grass. The area is very dry and people couldn´t afford to use water just to water lawns. 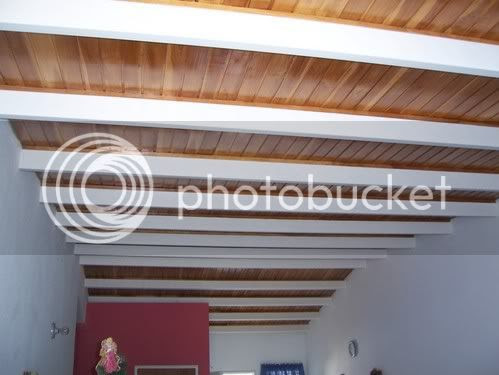 This is the inside of one of the houses. Notice the beautiful wood ceiling. How I wish I had that in my apartment. It is a very nice touch and points out something very important - this is NOT slum housing. The quality of it is amazingly high especially given that it is completely free of cost to the people who live there. 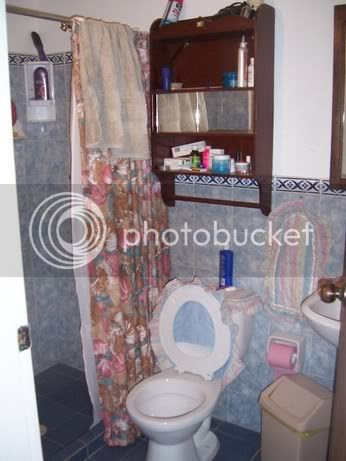 Ok, I hate to show personal things like peoples bathrooms but I just wanted to show the quality of this housing. All the tiling and fixtures you see cam with the house. Plus people were given basic furniture like a living room sofa and dining room table. One thing they don´t have - a hot water system. So its a cold shower every day. 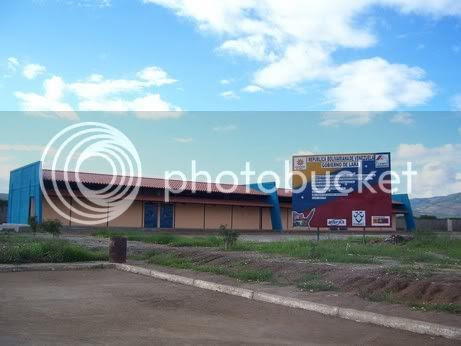 Lastly, this is a new day care just being finished inside the complex. So educational infrastructure is being built along with the housing.

Overall, I was truly amazed at the high quality of this housing. I myself would be very comfortable living in it. The people there mentioned that the public housing built before was of very poor quality and that this was much better than anything any other government had done. Further, people mentioned that the pace of new construction had picked up markedly in recent months. So hopefully there will be lots more of this coming down the pike.

And as a final note, you absolutly do NOT have to be a Chavista to get this housing. The completely apolitical person I have been talking about before is the one who lives here and he is certainly no Chavista. Further, I have spoken to residents there who are opposed to Chavez. There was clearly no political pre-requisite to getting this housing.
|
# posted by ow : 3:16 PM