Be for-warned this is a technical and numbers oriented post; some may have their eyes glaze over reading it. Nevertheless, given this blog’s emphasis on all things oil, the centrality of oil to the ongoing struggle in Venezuela, and some of the very large lies peddled by the Venezuela opposition this is an important post.

Both the Chavez administration and its opponents struggled for control over the Venezuela’s oil policy, and hence control over the state oil company PDVSA, from the inception of the Chavez administration. In December 2002 the PDVSA management led a strike aimed at toppling the government by shutting down all oil production. Their attempt to topple Chavez failed as oil production was restored and they were fired after ignoring repeated requests to return to work. Of course, given that jobs at PDVSA were well paid they didn't take kindly to being fired. They lobbied hard to get their jobs back and claimed both PDVSA and the country as a whole would collapse without them. As we know, neither of those collapses ever came about, as both Venezuela and PDVSA seem to be thriving.

However, it has been a recurring piece of opposition agiprop to say that PDVSA never recovered, that oil production is way down, and that Venezuela is therefore losing tens of billions of dollars due to the incompetence of the current PDVSA management. One reads this not only in opposition blogs, websites, and media but it has also made its way into the international media where agencies such as Bloomberg, AP, and others will often say that Venezuela is only producing 2.5 or 2.6 million barrels of oil per day versus the over 3 million barrels that the government has said it is producing.

Last fall, PDVSA released its audited financial statement for 2003 (filed with the U.S. SEC) which showed that Venezuela was indeed producing over 3 million barrels. Unfortunately, even compelling evidence such as this didn't change the propaganda coming from the opposition. Quite frankly, that they don't accept the audited numbers on production filed with the U.S. SEC, which no one in their right mind lies to, shows just how irrational they are. Be that as it may, even large segments of the international media kept on repeating the false opposition numbers on oil production.

One argument given by people who challenge the government numbers was that international organizations such as the International Energy Agency and OPEC supposedly pegged Venezuela's production at 2.5 or 2.6 million barrels a day. You see, they would say, the opposition is right when it gives those numbers and the government is lying when it says it is producing over 3 million! Of course, they would conveniently ignore a rather technical, but very important, point. The numbers that those organizations were reporting were in charts for "Crude Oil", i.e. oil as it is when it comes out of the ground. The problem is a significant portion of Venezuelan oil isn't "Crude Oil" - it is synthetic oil. The reason is that Venezuela has vast deposits of "extra heavy crude" in the Faja del Orinoco that have to be processed to convert them into something akin to regular oil before they can be refined in a standard oil refinery. Because they have to undergo this processing before they are exported they have been classified as "synthetic oil" not "crude oil". Venezuela produces about 600,000 barrels per day of this type of oil and when you add it to the other 2.5 or 2.6 million barrels of oil you the over 3 million barrels of oil that Venezuela has always said it is producing.

Undeterred by this fact that opposition continued with their lies. They would claim that the 600,000 in heavy oils were already counted in the numbers given by the international agencies and that Venezuelan production was indeed 2.6 million. For example, this graph from El Nacional puts production as per non-official sources (most likely the former PDVSA executives that were fired) at 2,406,000 barrels per day: 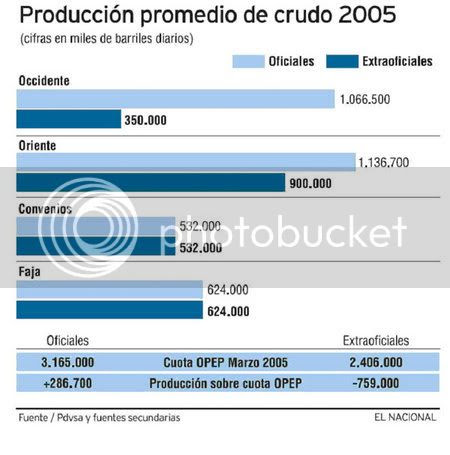 Further, they claimed they reports by the IEA and OPEC didn't indicate that the heavy oil wasn't included (as if the bolded words "Crude Oil" at the top weren't clue enough) and so they claimed those numbers were the total amount of oil produced in Venezuela.

Finally the International Energy Agency has been nice enough to settle the matter. What is the International Energy Agency? It is an organization created by the main oil consuming nations to monitor world energy supply and demand and lobby for more and cheaper oil. In this sense, it is the opposite of OPEC and it often actually underestimates oil production as a way of saying there is a shortage and prodding oil exporters to produce more oil.

In their "Oil Market Report" of March 14, 2006 they have a whole section on this topic where they indicate that they had NOT been counting the 600,000 in heavy crudes in their numbers and will now be counting them. Here is the relevant portion of the report, starting on page 18: 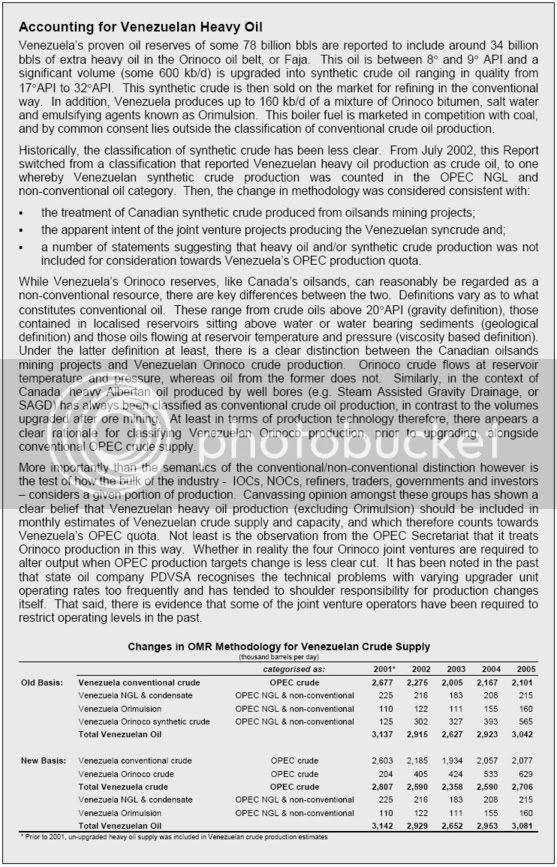 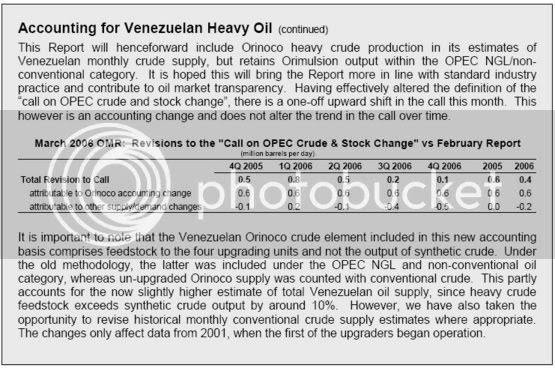 So there you have it confirmed. Venezuela is producing at its OPEC quota and its pre-strike level. That it isn’t producing more results from a decision to abide by quotas, not from any technical difficulties. It is really high time the opposition media and their counterparts in the internet such as Miguel Octavio, Gustavo Coronel, and others to stop lying about this. But given their complete lack of ethics I won’t hold my breath waiting for that to happen.

An additional point on these numbers is that the composition of Venezuelan oil has changed. The traditional light oil that Venezuela produces has indeed declined. That is because with the increase of production of heavy oils Venezuela has been forced to reduce production of other types of oil to stay within its OPEC quota. This is not optimal for Venezuela as it makes much less profit on the heavy oils than on lighter oils for several reasons. First, the royalties charged on the heavy oil were until recently much lower than regular royalties due to previous governments negotiating a virtual giveaway royalty of 1%. Also, Venezuela only has partial ownership of the heavy oil projects as they are principaly run by big international oil firms. Lastly, heavy oil is more expensive to produce than lighter oils. For all of those reasons Venezuela loses money by virtue of these heavy oils displacing lighter oil that it could be producing.

So why did Venezuela ever allow big international oil companies to come in and start the heavy oil projects? Part of it is that previous administrations were more beholden to the notion that foriegn investment and increased production were desirable. Given that they did not believe in honoring OPEC quotas they had no intention of reducing other production to accomadate the increase in heavy oil being produced. The Chavez administration, which stopped the self-defeating policy of breaking OPEC quotas, would almost certainly never have initiated these projects. But given that they inheritted them already well under way they had no way to stop them even if they were creating significant losses for Venezuela.

Now that we have established what Venezuela’s true production situation is and hopefully no-one, or at least not readers of this blog, will be easily confused regarding them I’ll take the opportunity to talk about Venezuela’s heavy oils a little more. First you may want to know what the term “Faja del Orinoco” is that keeps being used all the time. It is literally the old flood plain on the northwest bank of Venezuela’s principal river, the Orinoco. Here is a map that shows its location: 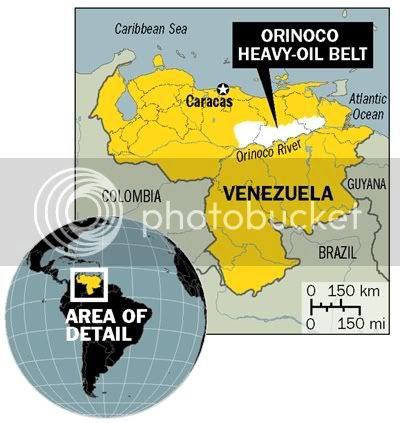 And why is the Faja del Orinoco so significant? Because it is estimated that there is so much oil there that if it is all counted in Venezuela’s totals Venezuela would then have the worlds largest oil reserves as this graph from the Christian Science Monitor shows: 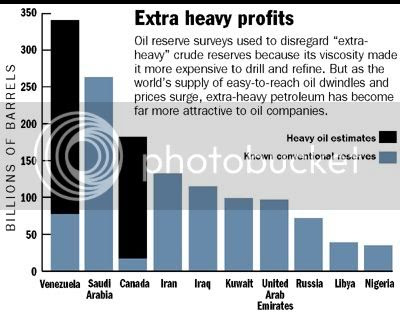 Note how once the heavy oils are included Venezuela blows past Saudi Arabia to have the worlds largest reserves of oil. You might want to keep this fact in mind when some dismiss out of hand the possibility that anyone would be interested in overthrowing the Venezuelan government or even invading the country. Looking at that graph it is easy to see a possible motive.

From the graph one can also see that Canada has important extra-heavy oil reserves that put that country in third place overall. In fact, Venezuela’s Orinoco belt is often compared to Canada’s “tar sands”. The comparison is not really valid. As was pointed out in the IEA report the Venezuelan heavy oil is pumped out of the ground and transported through pipes just like regular oil. By contrast the Canadian oil sands are mined with shovels and hauled away by huge dump trucks.

But the main difference is it is much more difficult and expensive to convert the Canadian Tar Sands into usable oil. The production cost per barrel for the Orinoco oil is about $8 per barrel while for the Canadian Tar sands it is about $12 per barrel. And this does not even include the cost of the huge environmental problems created by the open strip mines used to get the Tar Sands.

The bottom line is that as longer the world depends on fossil fuels and other countries see their resources depleted Venezuela will more and more take center stage.
|
# posted by ow : 4:31 PM