Helping those who need it the most

Picking up right where we left a couple of posts ago, at a recent Venamcham conference Venezuelan polling firm Datanalysis gave a break down of the evolution of household income of different social strata in Venezuela:

Now this chart is interesting in several ways. Like the chart from Datos that we recently examined we see monthly average household incomes. Some of the numbers are virtually identical; for example, the average monthly income in 2006 for social class D is given 890,990 Bolivares (about $356) by Datos while Datanalysis pegs it at 892,000 Bolivares. You can’t get much closer than that. Yet there are also some differences. For social class E Datos says their income is 680,419 Bolivares ($272) while Datanalysis puts it significantly lower at 515,000 ($206).

What all of that means is that these numbers need to be taken as approximations, maybe even crude approximations, rather than as something that is exact. I’m not sure how the numbers are compiled. But given that they are put together by polling firms I suspect they simply ask people how much they earn and so these numbers could suffer from all the same types of problems one runs across when doing polling on something like people’s sex lives.

Nevertheless, even recognizing these numbers may not be precise there is still valuable information to be gleaned from them.

First, we see even the lower Datanalysis numbers show that income is rising for Venezuela’s poor majority. With a rise in income of 445% versus accumulated inflation of 376% social class E has seen its standard of living rise in real terms 45%. And keep in mind, this is just hard cash. It doesn’t include the numerous in-kind benefits given via discounted food being sold at Mercal or expanded health care benefits through Barrio Adentro. Not to mention, if one uses the Datos income number of 680,419 then the accumulated income rise would be 620% which represents a whopping increase of 92% in real terms.

This means that since Chavez came to power in 1999 the income of Venezuela’s poorest has increased between 45% and 92% depending on whose numbers you believe. Either of those numbers represents a stunning increase and go a long ways towards explaining Chavez’s overwhelming popularity.

Secondly, there is another trend that can’t be missed looking at that chart. In the column on the far right side it gives the percent increase in income for each social class between 1998 and 2006 (in nominal terms). It clearly shows that the poorest people, those in social classes E and D have seen much larger increases than those in the better off classes of A, B, C. In fact straight down the column one sees that the poorer people are the more their income has increased under Chavez. Chavez was elected precisely to help those who had the least and he has done exactly that. This shows how false the opposition propaganda about the government helping some corrupt rich people more than the poor is (if you do the calculation for the wealthy Class AB group their income fell 28% in real terms). Under Chavez Venezuela is watching a massive shift of income from the higher social classes to the lower classes which should clearly account for why Chavez is so popular amongst the poor while so detested by the upper classes. Clearly when it comes to helping those with the least Chavez backs up his rhetoric with actions
|
# posted by ow : 6:47 PM

Irrespective of the facts "we're the victims"

The other day a September 11th memorial display rolled into town apparently to commemorate the fifth anniversary of those events. Given the large number of deaths and lives impacted that is completely understandable. Unfortunately it seems the commemoration can't be allowed to pass without being hijacked by the pro-war crowd: 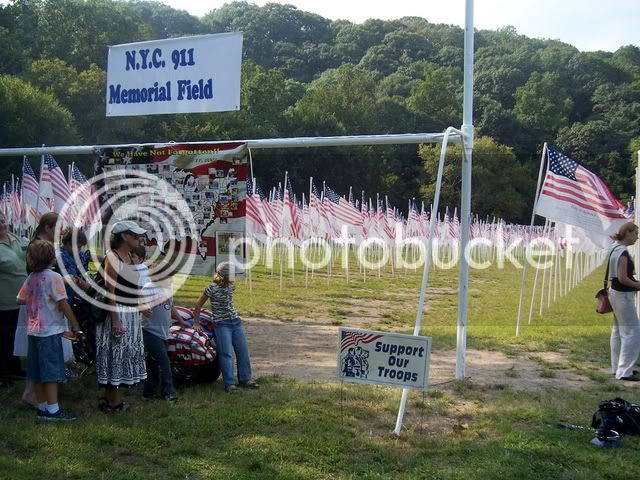 This is a whole field taken up with flags – each flag representing a person killed on 9/11. But note the sign prominently displayed in front – “Support our troops” it says (read: “support the war in Iraq”). So the organizers want people to remember 9/11, honor those who died, maybe feel some anger, and then turn those emotions to supporting the senseless war in Iraq.

Never mind that when cornered on this point war-bloggers will say that neither they nor Bush ever said that Iraq was related to 9/11. Never mind that the Senate Select Committee on Intelligence just produced a report that confirmed yet again that Iraq and al-Qaeda wanted nothing to do with one another. In the every day propaganda that people are subjected to, of which this is an example, the two are conflated: “we are in this war because we were attacked” people are told. It makes things nice and clean and relates 9/11 to the war in Iraq in the same way that Pearl Harbor is related to the Second World War.