Of course if they lose they'll still cry fraud

Preparations for what is increasingly looking like a public execution of the opposition on December 3rd (an electoral execution of course!) are moving ahead.

The key new development is that the elections will be overseen by the O.A.S. The Venezuelan electoral authorities, the C.N.E., are also working on getting an European Union delegation to come.

But the most significant anti-fraud measures are the electoral procedures themselves which when you think about them are quite good. First, the actual election workers in the voting sites have been chosen at random from the electoral lists. Interestingly, those who supported the validity of the Mexican elections last July argued that Mexico choosing poll workers at random all but made fraud impossible.

There is more however. As is well known, the Venezuelan voting machines produce paper receipts that can then be compared to the computer tally. It is this paper trail that allows the result to be audited. And audited it will be. At the end of the voting the computer will print out a tally sheet detailing the results. Only after the tally sheet has been printed and given to all those present, including representatives of political parties, will the voting machine be conected to a telephone line and the results transmitted to the central tabulation center

With the tally sheets in hand the voting center workers will randomly choose 50% of the voting machines to audit by drawing numbers out of a hat. The boxes containing the voting receipts will be opened and tallied to match to the tally the computer printed out.

Now I have never understood why they do a 50% audit. A random sample of just a couple percent, as was done in the Recall Referendum, is more than sufficient to validate the result. The 50% audit is therefore way more than sufficient. However, if you are going to count 50% why not go all the way and count every last ballot? Beats me. I really think that is what they should do. But they don't ask me.

Regardless, any actual fraud in the voting and vote counting process is pretty much ruled out. If someone can figure out how they could rig a vote with such a huge audit sample, with randomly chosen poll workers, and with opposition observers at all polling sites they should speak up.

I think fraud is clearly ruled out by these procedures. Of course, come December 4th the message of the opposition is likely to be "we was robbed". Some things are quite predictable in Venezuelan politics.
|
# posted by ow : 7:08 PM

Quite some piggy bank

When Chavez came to office the amount of foriegn currency holdings didn't even reach $15 billion. They have now gone up by a whopping $40 billion - and that is after tens of billions have been spent raising peoples standard of living, after billions more have been spent on public works projects and after the country's debt levels have been reduced.

It has always struck me as a little bit ironic that in the United States it has been Republicans that have run up large deficits while it has been Democratic presidents that have reduced them. But given that maybe we shouldn't be so surprised that it takes a quasi-socialist populist like Hugo Chavez to put Venezuela's financial house in order.
|
# posted by ow : 7:29 PM

Doing well, and feeling good about it

There is lots of bad polling information this weekend for the Venezuelan opposition. A lot of it was neatly summarized by the Maracaibo based Panorama newspaper in the following graphic. 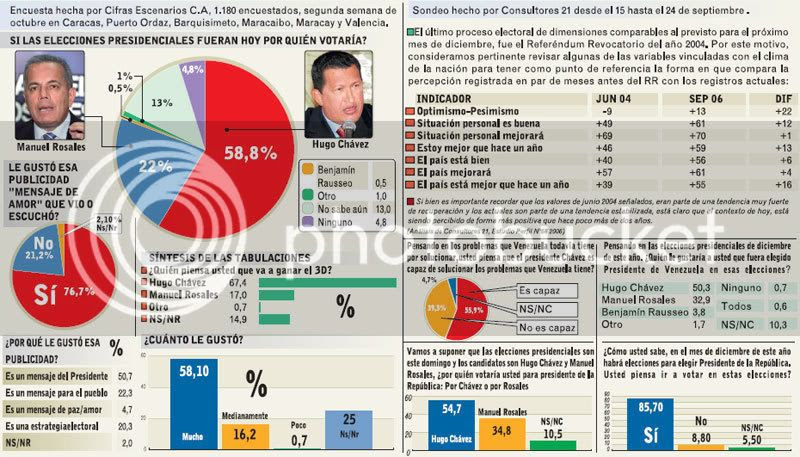 On the left side of the graphic they give polling data from a firm, Cifras Escenarios, C.A. which I have never heard of before. Given that, these numbers need to be looked at with at least a little skepticism. With that in mind what they show is:

Chavez would get 58.8% of the vote if the elections were today with Rosales only getting 22% and Rausseo less than 1%. Those numbers don’t seem to be that out of line with what other polls have shown.

Two other parts of the poll are interesting. In one they asked people if they liked the “Message of Love” advertising theme that Chavez has been using recently. 76.7% said they liked it, versus only 21.2% who didn’t like it, which really doesn’t surprise me. As I have said before, I think it gives a clear and effective message.

The next part is that when asked who they THINK will win the election 67.4% said Chavez and only 17% Rosales. That is, even many people who support Rosales recognize he won’t win. This is an important and good development as the more people recognize going in that Chavez is going to win the harder it will be for the opposition leadership to assert their “fraud” claims after the election.

On the right hand side of the graphic we get polling information from a completely different firm – Consultores 21 which is a well known and long established polling firm in Venezuela. They have some even more interesting results.

First, when it comes to who people will vote for 50.3% say Chavez, 32.9% Rosales, and 3.8% Rausseo. Clearly they found people to be somewhat less pro-Chavez than the other polling firm but he still had a big and insurmountable lead.

What is really interesting though is when they asked people about the general state of the country and how they feel about their own personal situation. What they did was compare peoples feelings this past September with how they felt in June 2004, not long before the Recall Referendum (which it should be remembered, Chavez handily won). First they found that in June 2004 9% more people were pessimistic than optimistic but by September 06 it changed to 13% more people are optimistic than pessimistic. So that is certainly a big plus for Chavez.

But it gets better. In June 2004 only 49% said their personal situation was good and now in September 2006 61% said it was good. In 2004 69% were optimistic about the future and that has now increased a bit to 70%. When asked if they were better off than they were a year ago in June 2004 only 46% said yes while now 59% said they were better off. So people feel good about their own personal situation and are even more optimistic that it will get even better in the future.

These results are very consistent with previously published polls that show most Venezuelans are happy with their own personal situation and with the country’s situation.

This is very important to keep in mind because what opposition propaganda and even a lot of the international press has portrayed is that somehow Venezuelans are somehow dissatisfied with their government. They do this by just using selective polling questions on topic such as crime or housing where people may not be happy with the present government. They then use that to portray generalized dissatisfaction and then talk about how Chavez remains popular “despite” that.

A prime example would be this from the Ottawa Citizen:

The Chavez campaign may also fear their candidate's vulnerabilities on issues such as crime, inefficiency and corruption. Mr. Chavez has held his own against these weaknesses, basing his popularity largely on the missions, his persona, and his promises of truly revolutionary changes in the lives of the poor. He remains atop all polls, but the opposition seems to be betting that these vulnerabilities, plus the fear of radical changes once the love subsides, may persuade undecided voters to join their camp.
"Chavez is vulnerable," argues Michael Shifter, a policy analyst at the Inter-American Dialogue in Washington. "Polls shows lots of dissatisfaction. He puts his finger on the problems, but can't find effective solutions."

In reality, nothing could be further from the truth. The country is in good shape and is getting better. That is reflected in this polling data. When people are asked how they feel OVERALL about the state of the country and their own personal situation they clearly indicate they feel good about things and are optimistic. That is what years of a booming economy, massive public works projects, and highly successful social programs will do for you.
|
# posted by ow : 11:03 AM