I know this is looking in the rear view mirror on an issue that is over and done with but the European Union finally put its report on the 2006 Venezuelan presidential election on the web here.

It is certainly worth a look: 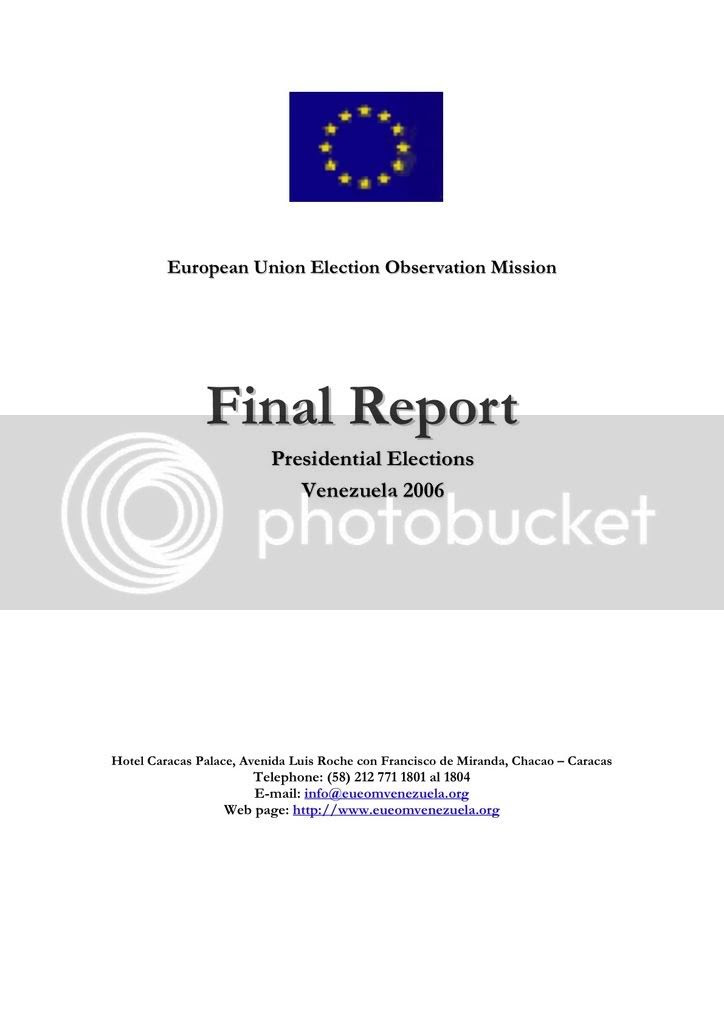 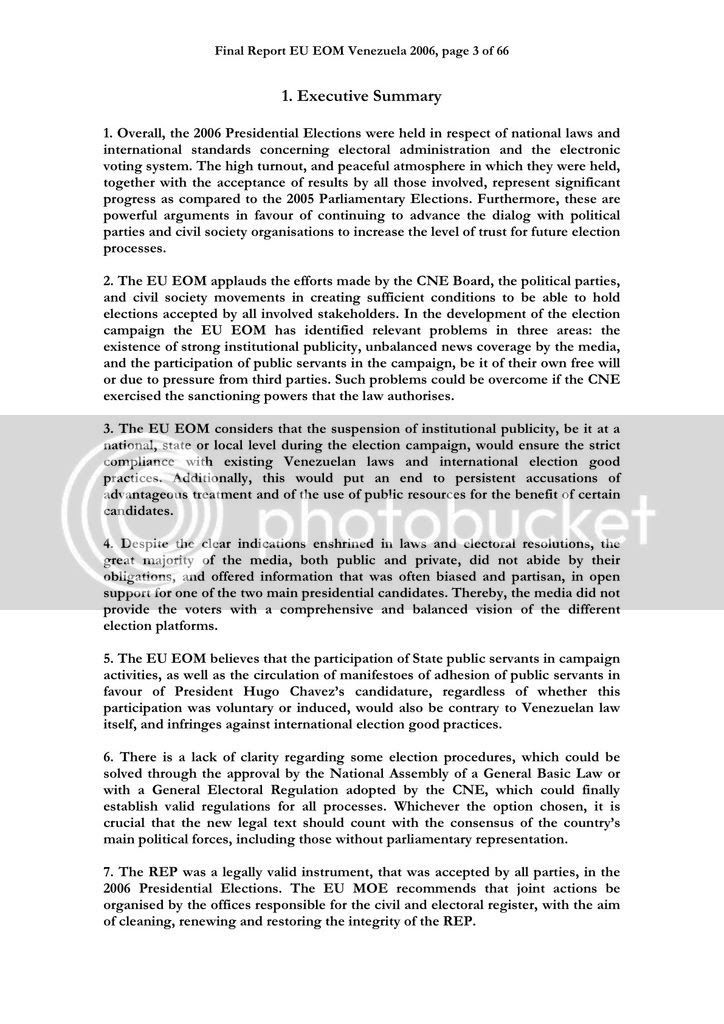 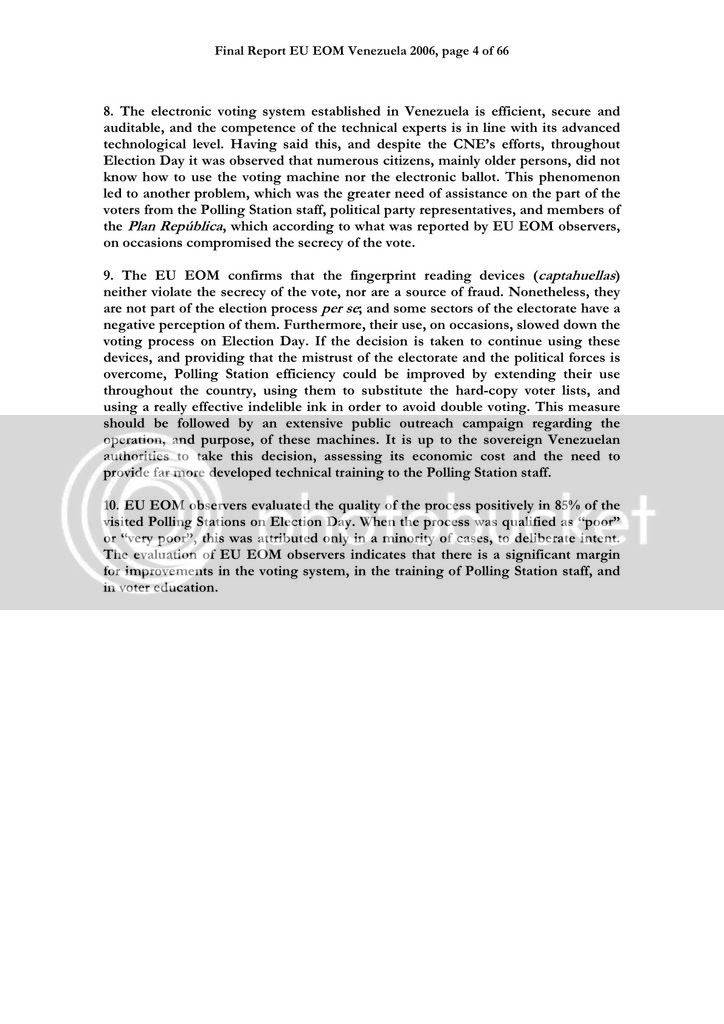 As the European Union notes, the elections were held in compliance with Venezuelan laws and met the international standards. That is, Hugo Chavez Frias is the DULY and LEGITIMATELY elected president of Venezuela despite all the non-sense of opposition loonies.

In going into the details of the reports there are several things that are noteworthy.

1) The EU found Venezuelan's electronic voting system to be excellent and, most importantly, completely auditable. In fact, the actual hardware was completely audited by ALL involved parties and found to be excellent. Of course, the paper ballots were also audited (by an "oversized sample" no less!) after the election. With all this, it is certain there was no fraud in the vote tabulation.

2) The Venezuelan electoral authorities, the CNE, were very cooperative to all parties involved, dispelling the notion that they somehow just serve Chavez's interests.

3) The electoral registry, while containing errors, was a perfectly valid, legal, and audited database the provided a legitimate basis for the election.

4) The fingerprint machines were also audited and were found to not at all promote fraud or compromise the secrecy of the vote (all the opposition lies notwithstanding!)

5) The government of President Chavez did unfairly use state resources to further its campaign and government workers were actively involved in his campaign which goes against both the law and international norms. The U.E. stressed the need for the CNE to fix this going foward.

6) It found that the media, both public and private, were invariably highly biased towards one side or the other. Uh, duhhh. It's kind of hard to watch Venezuelan TV for more than five minutes and not figure that one out.

Regardless they did do a very interesting analysis of the coverage overed by all the different media some of which I am posting here: 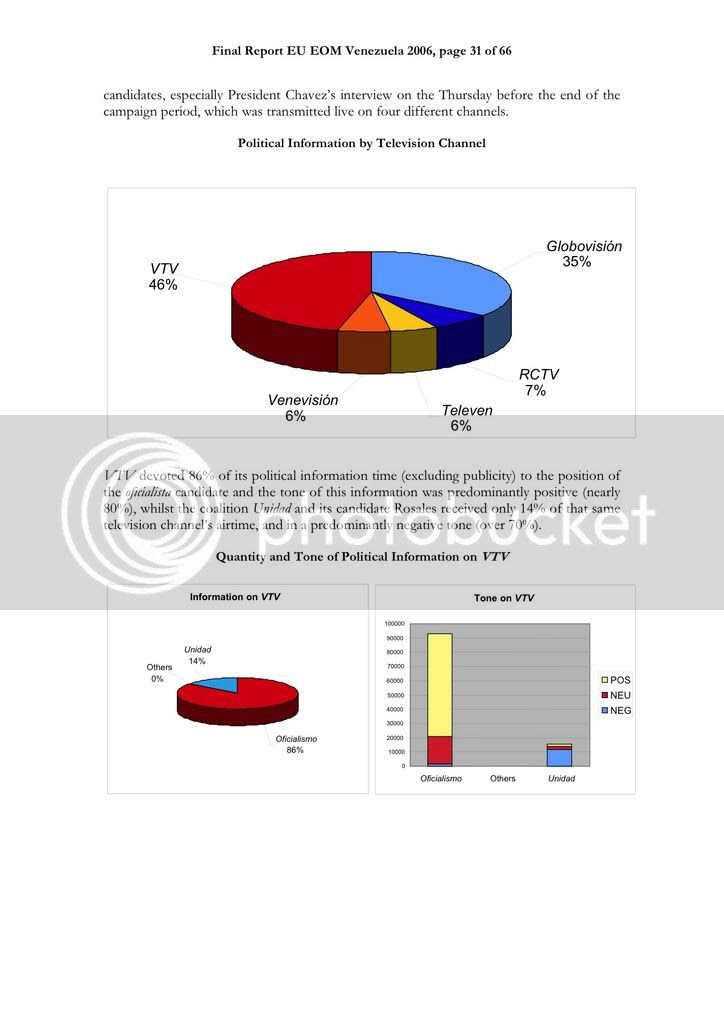 This first slide shows how the government TV channel, VTV, was highly biased in favor of the government, giving Chavez lots of favorable coverage and Rosales lots of negative coverage. 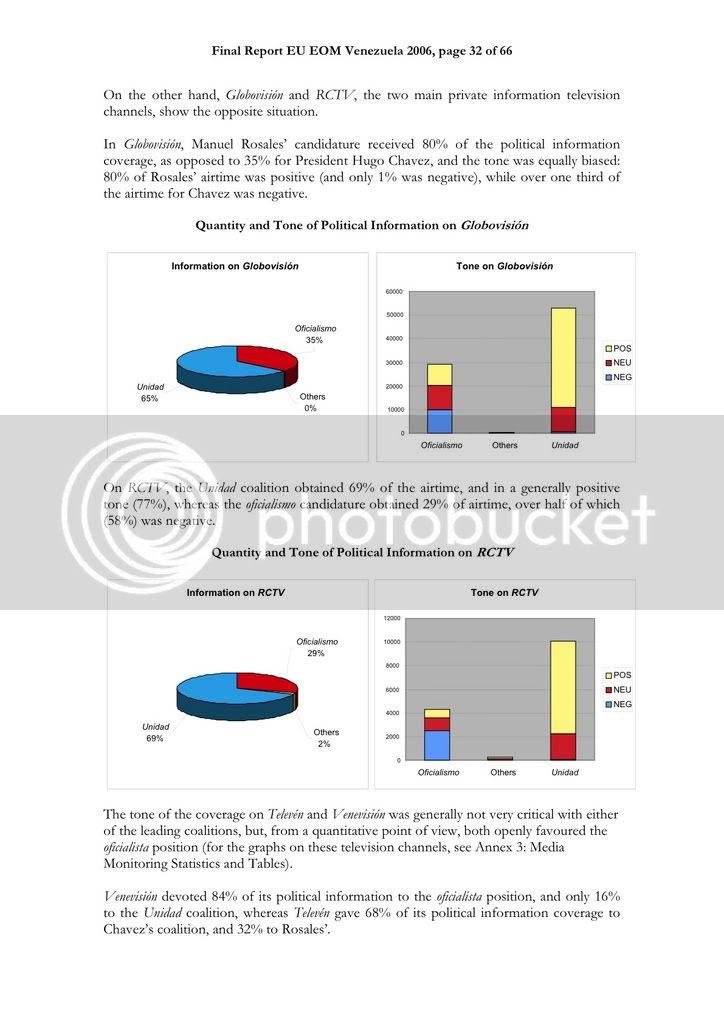 The E.U. used this to point out how dysfunctional Venezuelan media is which is certainly true. Thing is, it does sort of balances. As long as you watch two hours of VTV and two hours of Globovision each night you'll get four hours of "fair and balanced" coverage!

Again, this is all just for the record but if you do have the time read the report. It contains lots of worthwhile information. And it helps rebut all the non-sense that the crazies are already starting to come out with.
|
# posted by ow : 3:22 PM