Houses or cars? - what Bolivar tells you to do.

Given the abstractness of the discussion about the value of the Venezuelan currency I think it will be good to look at an actual situation in which it significantly, and in my view adversley, effects the Venezuelan economy.

Over the past several years Venezuela has experienced a huge boom in the purchase of automobiles. Sales have set all time records year after year and look to go over 400,000 units this year. It should be noted that the great majority of cars are imported, or if assembled in Venezuela, made almost entirely with imported components. That is, very little of the value of those automobiles is actually created in Venezuela.

It is also known that Venezuela has a huge housing shortage. Many people live in substandard units, sometimes little more than shacks, or in overcrowded homes with relatives. The housing shortfall is generally put at at least 1.5 million units.

Given that, when money is spent building a house in Venezuela nearly all the value accrues to the Venezuelan economy. Venezuelan construction workers get jobs building it. Venezuelan cement, steel, tile, and furniture factories also get more demand for their products. Therefore money spent on housing goes almost entirely to Venezuelans and creates a multiplier effect through putting money in the pockets of other Venezuelans that really boosts the economy.

Given that building homes would seem to do a lot more to better Venezuela than importing cars we would think the Venezuelan government would make sure that happens. But it doesn't. Witness the following chart from a VenAmCham presentation: 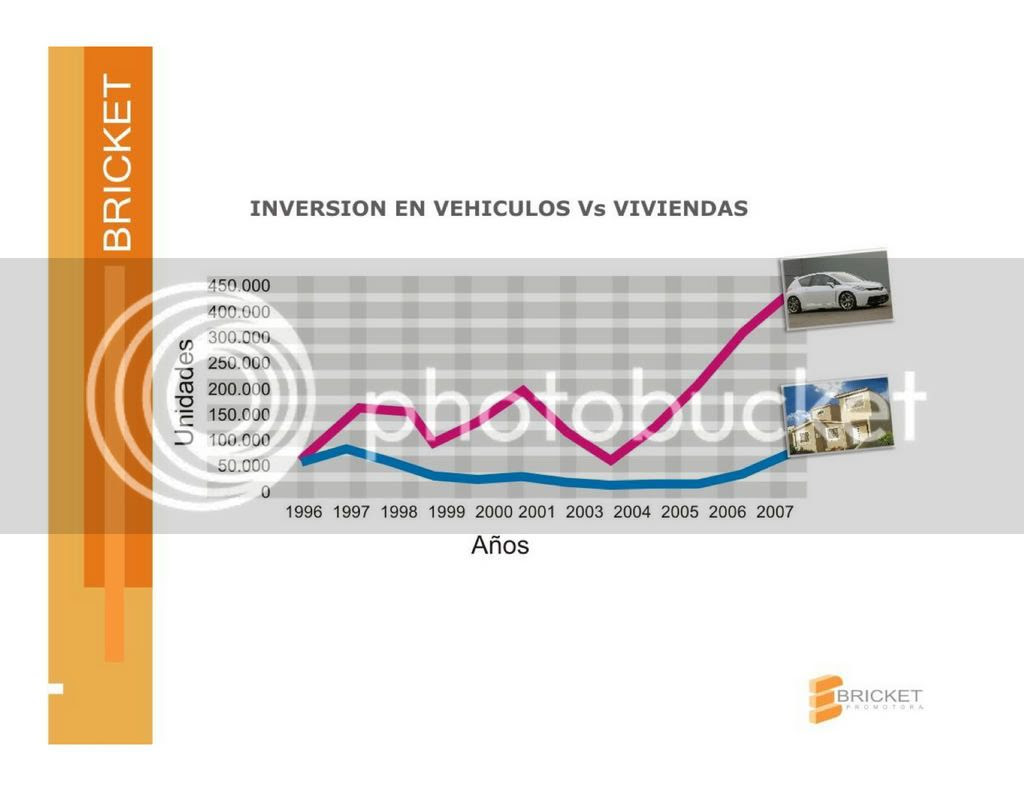 As you can see, while housing has stayed flat for most of the Chavez administration and picked up only a little of late automobile sales have sky rocketed. Given the above this is clearly not good.

But why is this happening? Why would people be so heavily favoring automobiles when houses are needed just as badly (if not more so) and are almost always a better investment?

Now lets contrast that with cars. They are not made with Venezuelan inputs (or only mimimaly so) given that they are imported. Being imported they are originally priced in dollars and what determines how their price changes in Venezuela is determined by how the value of Venezuelan currency varies compared to the dollar.

As we know, a dollar is still worth 2,150 bolivares and that hasn't changed in years. That is a car that cost $50,000 dollars cost 107 million Bolivares three years ago and it still costs 107 million Bolivares today. Therefore, during the past three years of inflation, of housing prices going up, and of wage increases, the price of an imported car has stayed the same. This of course means that cars have become MUCH, MUCH cheaper for Venezuelans relative to other things like houses that are made in Venezuela. No wonder people are running out and buying cars instead of houses.

People buy more of things that get cheaper and less of things that get more expensive. The Bolivar not being devalued has made cars get much cheaper relative to cars in Venezuela over the past several years. Therefore Venezuelans are buying cars rather than houses - this isn't rocket science.

As an additional point on this it should be noted that the government actually subsidizes new home purchases for most people by giving them grants of up to $8,000 for the purchase. Yet even that subsidy is not enough to overcome the huge bargain that the overvalued Bolivar makes cars and get people to buy houses instead.

This also manifests itself in a couple of other charts given in the presentation such as this one showing imports: 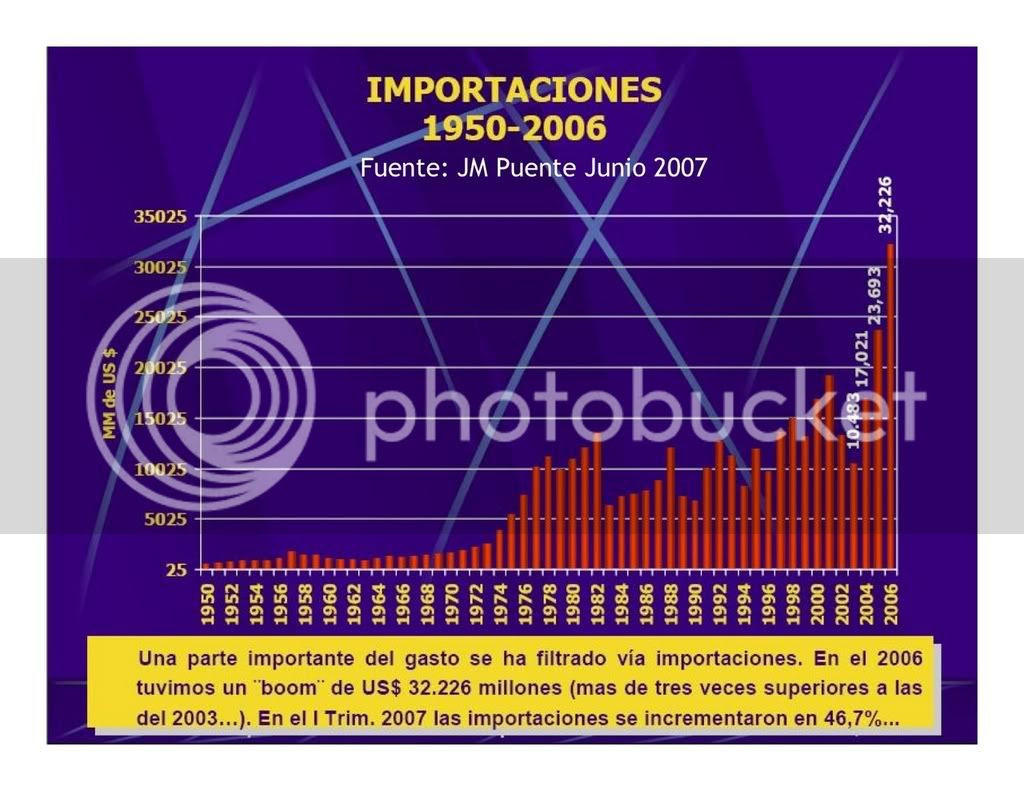 Note the huge boom in imports doesn't even include 2007 which will likely be way over $40 billion and off this chart. Again, those imports, some of which ARE necessary, create jobs for foriegners not Venezuelans.

The repurcussions of this can see in the constuction industry where the number of firms had decreased at least through 2005: 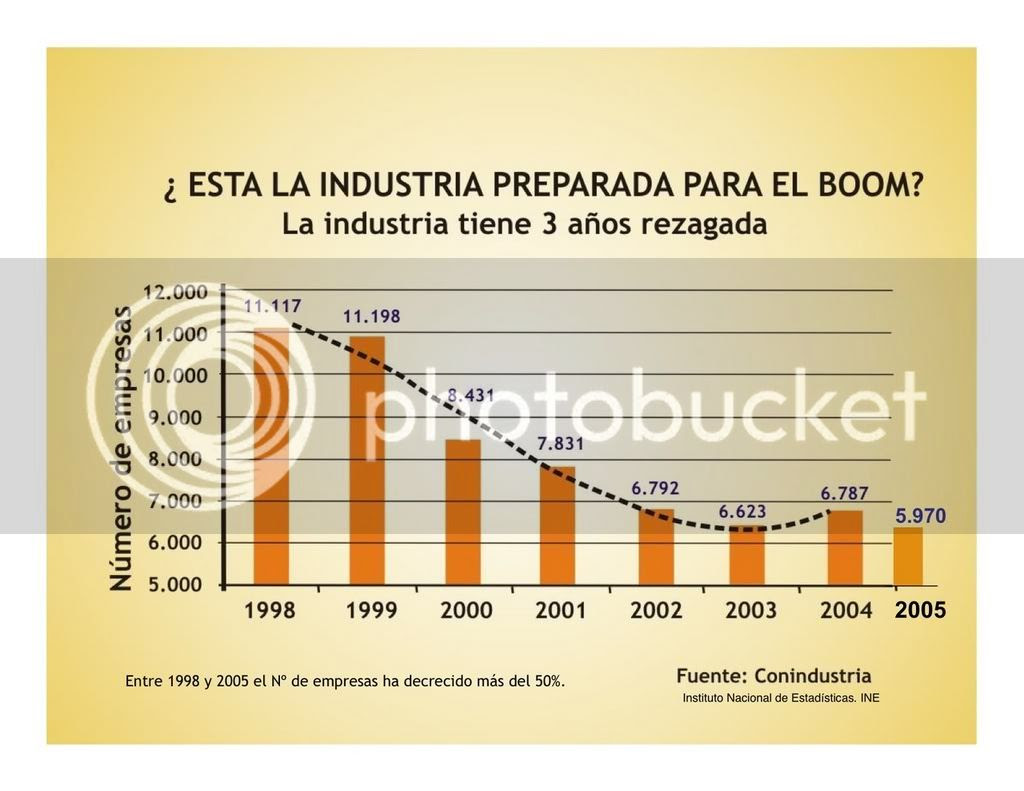 I would expect that 2006 and 2007 would show an increase in the number of construction firms. Still, contrast this chart with that of the imports and you should be able to see part of what the problem is.

This has shown how just a couple of segments of the Venezuelan economy are impacted by nefarious policy of having an overvalued currency. It is great for U.S., German, Korean, Japanese, Brazilian and Colombian autoworkers and companies. Yet it isn't so great for Venezuelan construction workers and suppliers. Money that could greatly benefit the Venezuelan economy by creating tens or even hundreds of thousands of construction jobs in Venezuela instead leaves the country while creating maybe a handful of jobs in car dealerships.

This mistaken economic policy creates very large losses for Venezuela because the incentives this policy creates are so strong they easily overwhelm government subsidies meant to counteract them.

One really has to wonder why this is allowed to happen and how much longer it will continue.
|
# posted by ow : 6:11 AM