Last night Hugo Chavez appeared on U.S. television in a interview with Barbara Walters. I missed it due the crappy private cable TV company having my cable box go out so I had no TV at all. Maybe Bush should be using all the billions he is throwing around to nationalize Time-Warner rather than invade countries half way around the world. But that is a topic for another post.

Through the miracles of YouTube though we can all see the the interview:

All told it was pretty good. It showed a few young rich yuppies who oppose Chavez but won't leave right now - presumably their parents are making too much money right now.

Chavez did an excellent job of distinguishing between his disdain for the U.S. government and his feelings regarding the country as a whole. He also got Ms. Walters to actually go to a Caracas Barrio - a place the rich yuppies have probably never gone in all their lives.

Lastly, in his rudimentary english he tells U.S. that Martin Luther Kings dream is the dream of Americans and his dream also. Spoken like the brilliant politician that he is.
|
# posted by ow : 1:05 PM

The new bridge replacing the old viaduct between Caracas and the coast is progressing rapidly. According to the government it is now 84% complete. Only one support column remains to be finished and the steel framework for roadway has now spans almost 500 meters of the ultimate 803 meter length of the bridge. Here are some pictures: 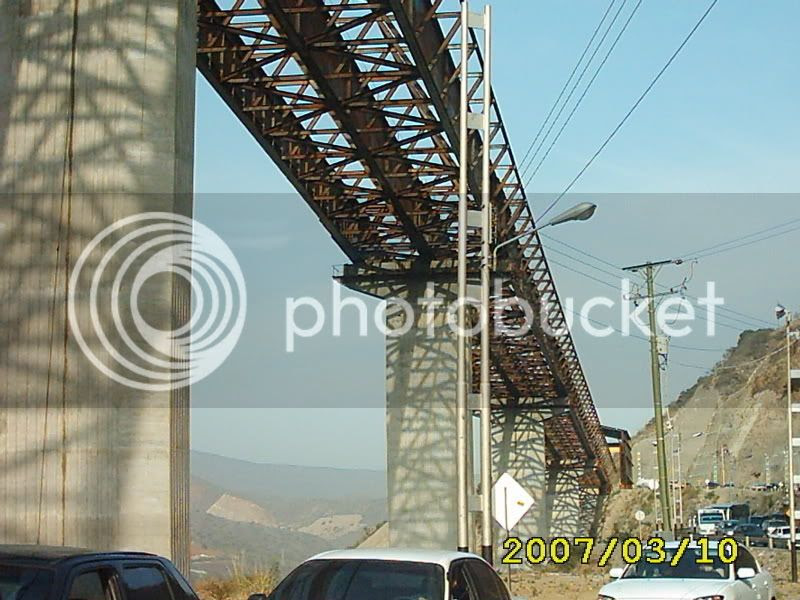 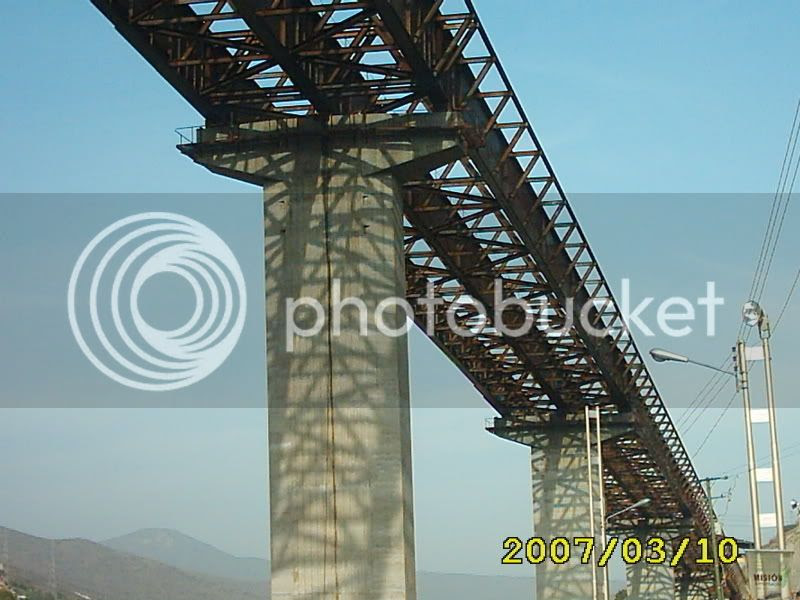 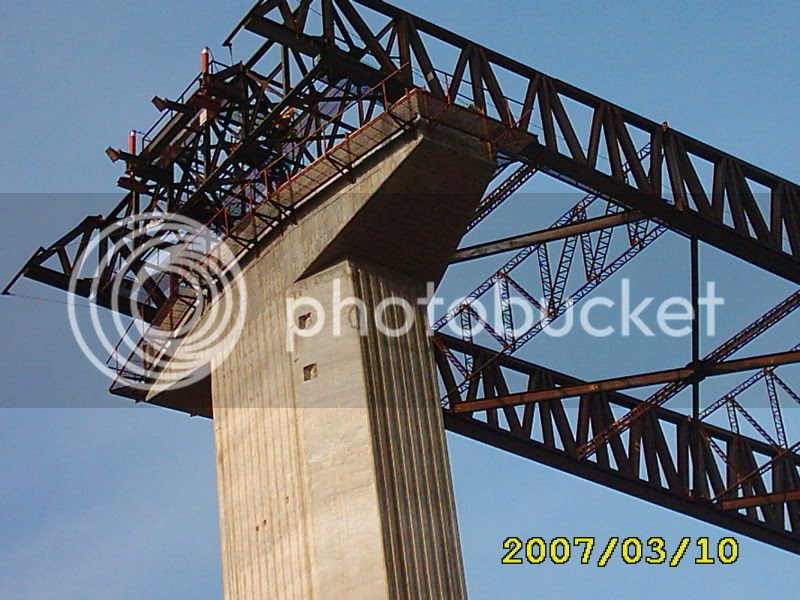 This is the "nose" of the steel structure. It is all fabricated on one side and then pushed out along the towers. So this part you are looking at will eventually be pushed to the other side of the span to complete the crossing. It is estimated that this will be finished in two weeks. 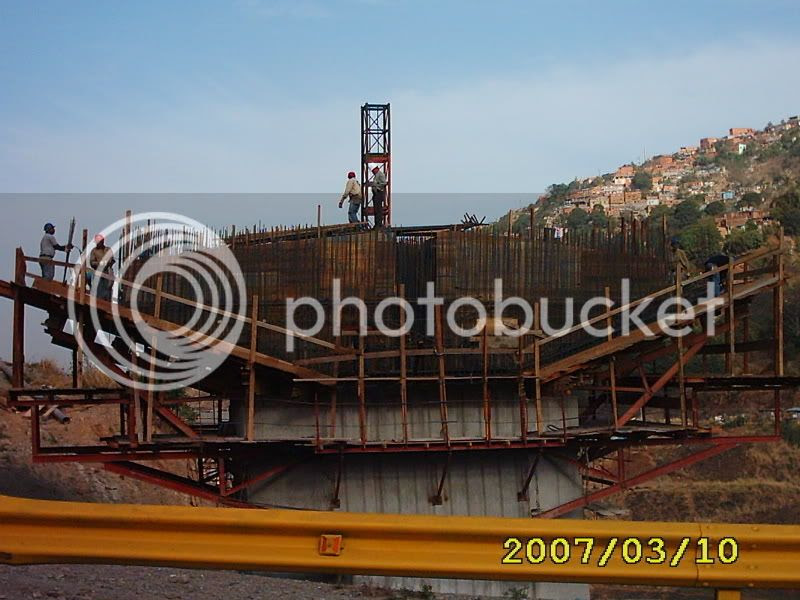 This is the last tower being finished. It is days away from completion.

Once the steel structure is all in place 704 pre-formed concrete blocks weighing 15 tonnes each will be liftd on top of steel structure and set in place. On top of that will be made the paved roadway.

OPEC does its job

There is a lot to post on today - we'll see what I get to. But if nothing else I want to post what could be the shortest entry in the history of this blog. Today on page A18 of the Wall Street Journal there was a big article on OPEC and what it is likely to do going foward. However, I will only reprint the following which is the first sentence of the article:

Those wishing to send congratulatory messages to Rafael Ramirez should feel free to do so at:

Continueing with the recent theme of important news out of Venezuela that the opposition tries to either ignore or distort because it contradicts the propoganda they've been peddling today I want to bring up the difficulties that Chavez's efforts to form a single revolutionary party has run into.

It will be recalled that a couple of months ago Chavez proposed that all parties that support him should unify into a single party. The opposition and some in the international media immediately began to peddle the false notion that this was move to a one party state. That was completely false and absurd because it was only supporters of Chavez who were called on to do this, the opposition could have all the stupid little parties it wanted. Further, even pro-Chavez groups weren't required to do this. They were required to do this if they wanted to still be part of the ruling coalition - not an unreasonable condition laid down by a duly elected president. Winning an election does allow you to dictate terms to those who which to walk along side you.

Of course some tried to make hay even out of this. This showed Chavismos lack of tolerance for pluralism they said. Of course, they've said that for years now while Chavismo has often been made up of many groups, factions, and tendencies with widely differing views.

Recently we have gotten further evidence of this pluralism and independant thought. Three long time leftist parties have refused to disband and immediately join the new "unity" party. They are the Communist Party, Patria Para Todos, and Podemos. All of them have done this for principled reasons - they want to see how the new party is set up, how it is governed, and what principles and program it supports. I imagine the Communist Party doesn't want to disolve and join a party that ultimately turns out to be a Social Democratic party. Makes perfect sense to me.

Further, these political parties don't follow the dictates of just a few leaders. Any decision to dissolve needs to be discussed and approved by the rank and file which is exactly what has been happening.

So the reality, much ignored by our friends in the international media, is that pluralism, principled political positions, and independent thought is alive and well in Chavismo - just as it always has been. Some day the opposition might want to try it. Who knows, maybe they'll like it if they just give it a chance. 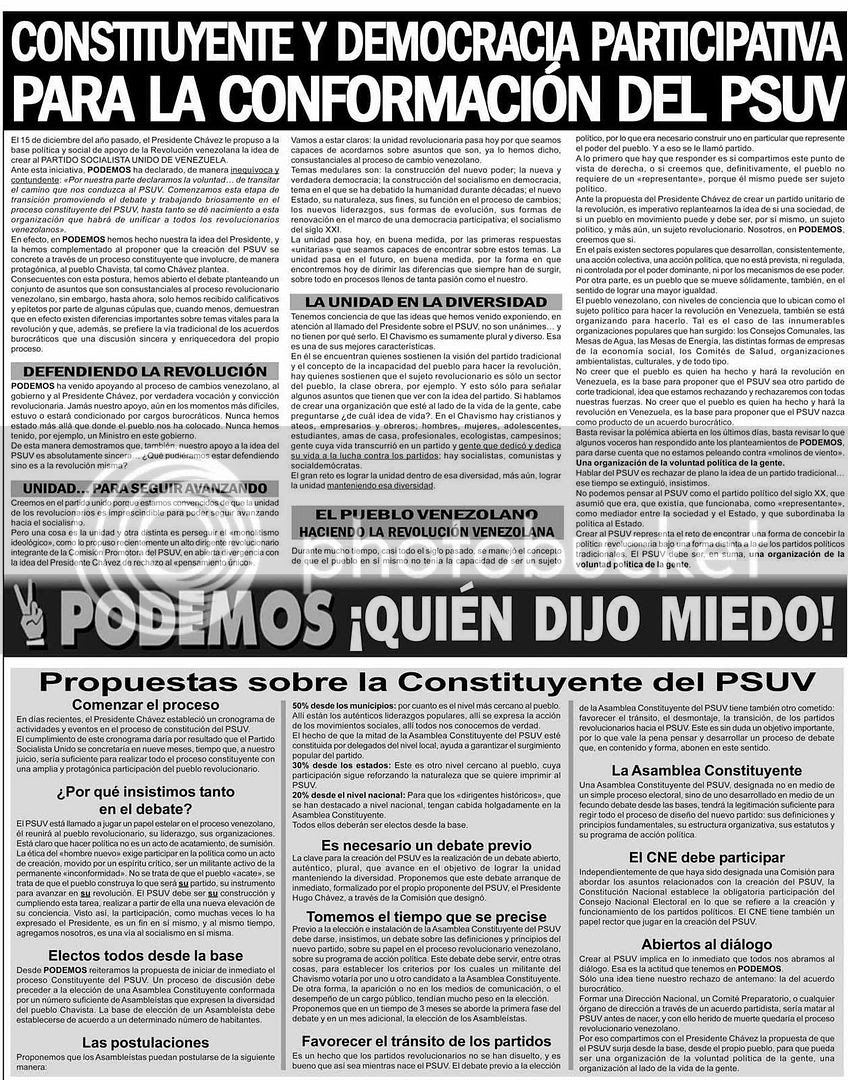 This is an advertisement published by PODEMOS in Ultimas Noticias explaining their position with respect to the formation of a single party of and under what conditions they would join it. Their primary conditions is that there first be a thorough discussion regarding the principles of the new party and that the assembly that sets up the new party and selects its leadership be formed by local and state level elections.

In other words, they want internal democracy within political parties and decisions based on political principles not based on personalities. Exactly what Venezuela needs.
|
# posted by ow : 7:31 PM

Being red costs Ramirez some green

I'd just like to update everyone on some news that tends to fly under the radar. The Venezuelan National Electoral Council decided to levy some fines for breaches of electoral laws. Uh oh, it must be poor Globovision or RCTV about to be the victims of "repression" again, right?

If you thought that, you've been reading too much opposition propoganda. In fact, the first person to be fined will be the president of PDVSA, Rafael Ramirez, who will have to pay about $8,000 out of his pocket for saying that PDVSA is "red". The CNE fined him for campaigning inside a public institution which is illegal.

The second fine was levied against the program on State TV called La Hojilla. La Hojilla is a very hard line pro-Chavez program. It is being fined for having campaign coverage that was too one-sided (jeeze, did the CNE bother to watch Globovision during the campaign? How they escaped sanction is completely beyond me).

What, more Chavistas were fined than opposition? No wonder the opposition media has completely ignored this, not to mention the international media. I guess it doesn't fit well with their notion "repression" being directed against the opposition.

A few weeks ago when the opposition newspaper Tal Cual was fined for satirizing Hugo Chavez's young daughter in an editorial the opposition was quick to cry repression. I wonder why the silence about this? In any event, I imagine Rafael Ramirez will do the dignified thing and just pay the fine - it will be about one months salary for him. Tal Cual's route of cadging money on street corners I'm sure is beneath him.

Lastly, it should be noted that Ramirez's words were at the time loudly and publically appluaded by President Chavez who said he should repeat them a hundred times. Yet he is now being fined by a different branch of the government. So much for the opposition non-sense about there not being any seperation of powers.
|
# posted by ow : 5:38 PM