From todays El Universal we get some quick economic notes:

Remember how the opposition was concerned that due to Venezuela's international reserves going down earlier this year as the government bought CANTV and transferred money to FONDEN the country might run out of dollars? They needn't have worried. The international reserves are now headed back up and increased $409 million this past week and now standing at $25.615 billion dollars.

Remember how they also claimed that even the government sponsored low cost food retailer Mercal was in trouble with declining usage? Apparently that was all wasted worry too. Turns out that between January and June 2007 sales at Mercal went up - no this is not a typo - a stunning 92%. The leading state in terms of purchases at Mercal? Zulia. They may have an opposition governor but they love Chavez's social programs.

Lastly, if RCTV can't make a go of it on cable they can't blame Chavez. As Venezuela has boomed under his rule so too has subscription TV (cable and sattelite). Currently 1,373,873 homes in Venezuela have subscription TV. This comes to about 20% of all Venezuelan households. This is almost double the 778,904 households that had it in 2000. Between January and March of this year alone 167,930 homes got this service.

Ooops, and almost forget. Tomorrow Chavez is inaugurating the third stage of the ThermoZulia electric plant bringing on line another 150 MegaWatts of capacity. At tomorrows inauguration he will also announce the construction of additional electric capacity that will see Zulia become completely independent of the national power grid and electricity generated in the Guyana region hydroelectric plants.

The opposition is quiet, Chavez is free to govern, and Venezuela continues to prosper...
|
# posted by ow : 4:53 PM

Venezuelans not only have the good fortune to live in a fourishing democracy but I think it can be appropriately said that they live in one of the most democratic countries in the world. Some, such as the Brazilian President, Lula, have said that Venezuela has an "excess of democracy". Personally, I think the proper term for Venezuela's political system is a "hyper-democracy".

One feature that makes it so is the right of people to recall any office holder once they have reached the mid-way point of their term. This right is clearly layed out in the constitution and has already been used against even the president of the country (unsuccessfully) during his previous term.

The fact that Venezuela has this "hyper-democracy" is good new for the opposition. The reason is it potentially allows them to eventually have recall votes on various local officials and deputies of the National Assembly. Thus they don't have to wait for the full terms to be up before they can try to regain elected offices they lost in part through foolish election boycotts.

Leave it to the trememdous democratic spirit of Chavismo to bail out the opposition!!!

Various local officials who were elected in late 2004 are now elegible for recall. In order for the recall vote to be held 20% of the electors in the relevant district have to request it. That process of requesting an electorl vote is about to take place throughout Venezuela. The following diagram shows the number of offices up for recall: 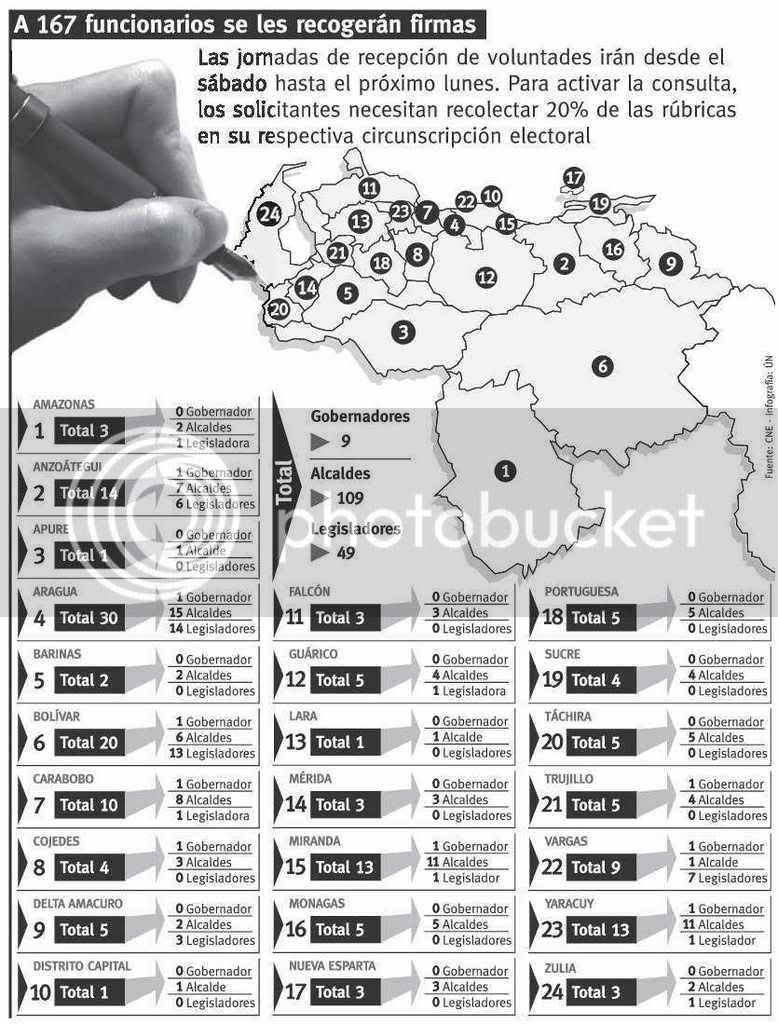 The National Electoral Authority, the C.N.E., who oversees the process took out full page advertisements listing all officials up for recall: 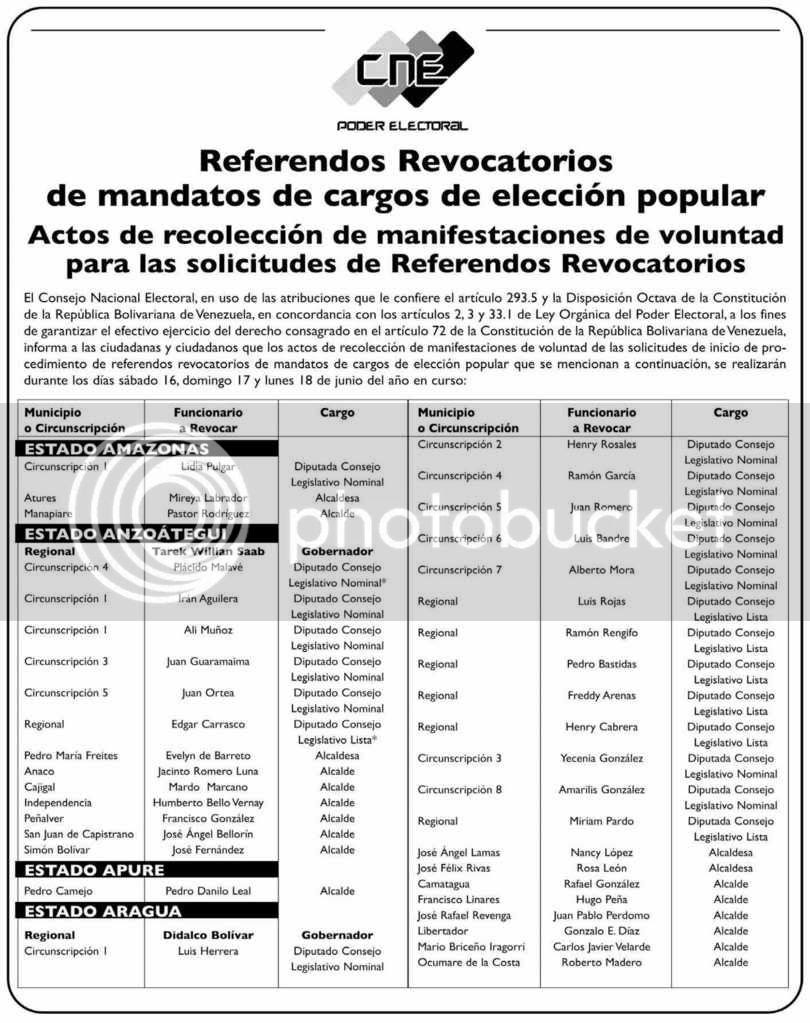 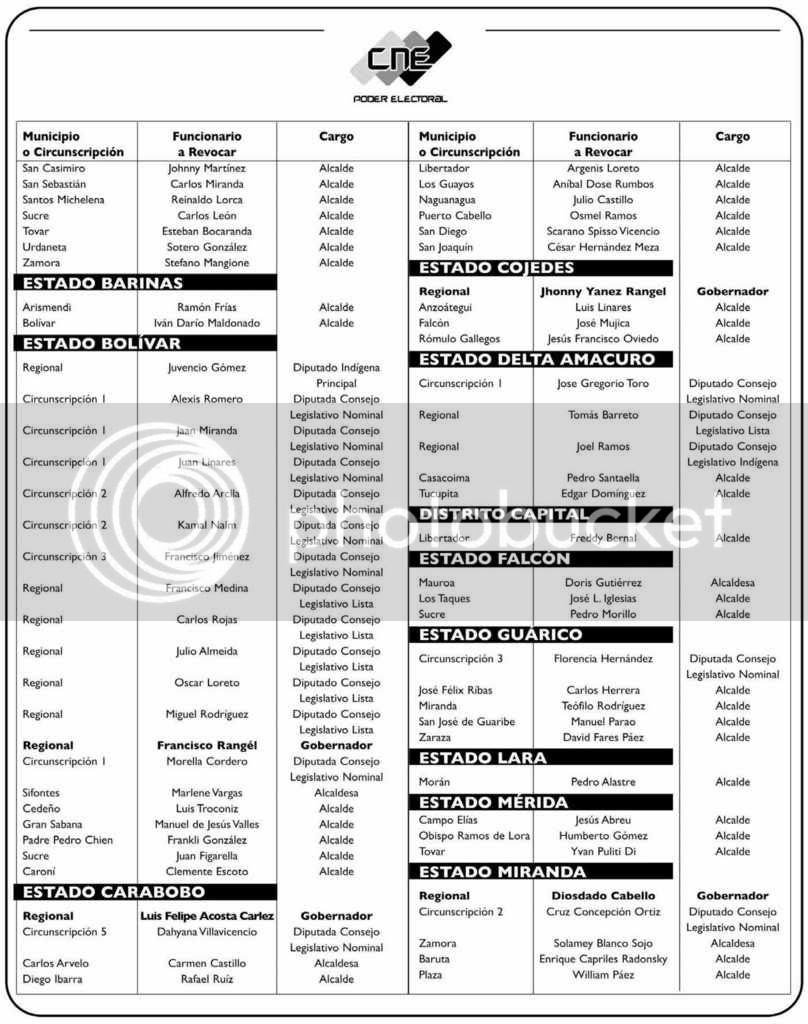 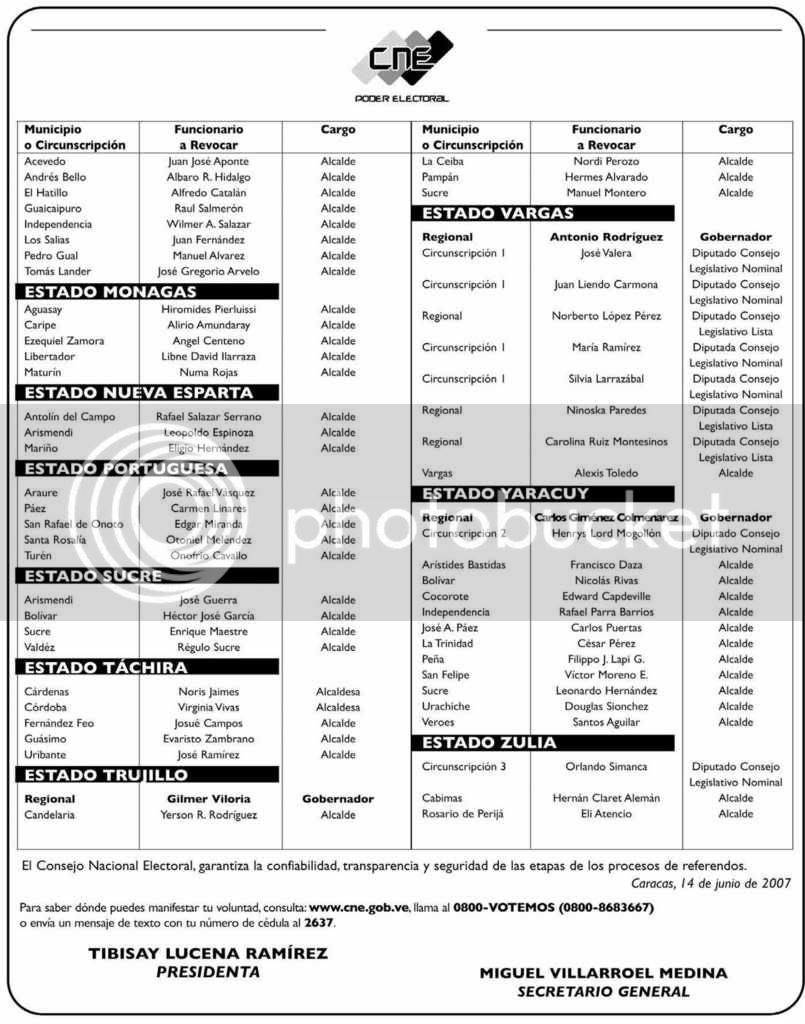 Note that a number of well known pro-Chavez office holders are being subject to this process. They include Freddy Bernal who is mayor of part of Caracas, Tarek Saab who is governor of Anzoategui, Carlos Gimenez of Yaracuy, Diosdado Cabello who used to be Vice-President and is now governor of Miranda, and Felipe Acosta Carlez of Carabobo.

If the opposition has regained favor among the public, as some of them now claim, here is there chance to prove it - courtesy the hyper-democracy brought into being by Chavez.
|
# posted by ow : 2:53 PM

Opponents of Venezuelan President Hugo Chavez have often liked to imply that under his rule Venezuela is engaged in a large scale military buildup, has increased military spending, and spends more than previous Venezuelan governments and other Latin American countries have. Mainstream media reports have also served to reinforce this notion. Of course, like so much that the Venezuelan opposition and the commercial media say these numbers don’t hold up when the actual numbers are examined.

The examination of Venezuelan military spending is greatly facilitated by the fact that the Stockholm International Peace Research Institute (SIPRI)just came out with its 2007 edition of its military spending handbook. The database on military expenditures is on line here.

This database provides a wealth of information on Venezuelan military spending across time including, for instance, that Venezuela spent $1.9 billion dollars on its military in 2006.

Of course, over time I’ve built up a healthy skepticism of the data provided by many of these international organizations and think tanks. So the first order of business would be to see if this organization's data is accurate. Given that the Venezuelan government is highly transparent this is a simple task.

That is more than $1 billion less than the SIPRI amount. Does that mean the SIPRI is fudging the numbers? Not at all. It means that the SIPRI was savvy enough to know that the Venezuelan development fund, also known as FONDEN, used some of its resources for military expenditures. Looking at the Ministry of Finance “Memoria y Cuenta” for 2006, which can also be found here, we see that the Ministry of Defense was give $1.09 billion for 2006. 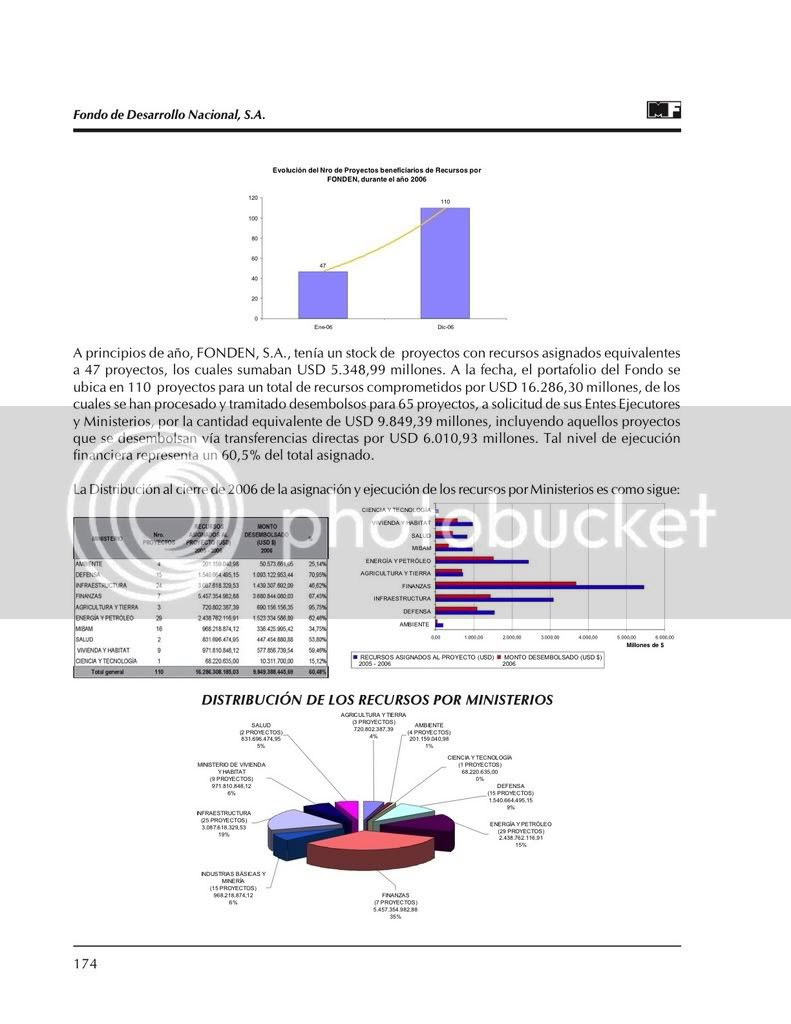 Adding the two numbers we get $2 billion dollars. Taking into account that the SIPRI numbers were given in constant 2005 dollars, which would be slightly less than the 2006 numbers I just calculated, we can see that the number they give match the numbers given by the Venezuelan government and are accurate.

Having established the accuracy of the SIPRI numbers we can now see what those numbers show us about Venezuelan military spending patterns. First lets look at Venezuelan spending by year from 1991 to 2006:

But rather than just guess, lets quantify it as I have done in the following graph:

In this graph I compare average military expenditures from 1991 to 1998 against the average from 1999 to 2006 when Chavez was in office. As can be clearly be seen military expenditures were HIGHER before Chavez came to office by almost $200 million per year. So much for the “militaristic” Chavez spending more on arms then his predecessors, he is spending LESS as is clearly shown by the numbers.

How could this be given that every time we turn around the media is talking about some huge new arms purchase by Venezuela? Simple. The media isn’t reporting actual purchases. What they are often reporting are possible deals, or rumors, many of which never materialize. Of course, given that much of the media has an anti-Chavez agenda they are only too happy to pass of this information as fact and never go back and correct it when it turns out to be erroneous. Its nice to have a "free" media - it would be even better if we had media with some integrity.

Next, lets look at Venezuelan military spending as a percentage of GDP:

Looking at Venezuela’s military spending relative to the size of its economy we can clearly see that prior governments spent a significantly greater portion of the countries resources on the military than has Chavez. Prior governments often spent around 1.6% to 1.8% of GDP on the military whereas Chavez has averaged around 1.3% to 1.4% - an unmistakable decline.

Lastly, I thought it would be interesting to look at military spending for 2006 for a few other Latin American countries:

From this graph we see that of major Latin American countries only Argentina spends less than Venezuela. Colombia spends more than twice as much as Venezuela does as does, interestingly, Chile. Given what others are spending Venezuela’s military expenditures do not seem to be out of line.

So the next time you hear some opposition propagandist or sloppy New York Times reporter tell you that Venezuelan military spending is out of line and has increased significantly remember the following:

Under President Chavez military spending has been reduced both in real terms and relative to the size of the economy.

Venezuelan military spending is significantly less than that of many other Latin American countries.

There may be countries where military spending has soared and is out of proportion to any conceivable legitimate need (a certain North American country comes to mind) but Venezuela is not among them. Yet one more anti-Chavez myth that doesn't withstand scrutiny of the actual numbers.
|
# posted by ow : 8:30 PM

This morning two of the students who should have had a discussion and/or debate in the National Assembly had it on TV.

It's long but interesting: