The work goes on

The new viaduct from Caracas to the coast has been operating for a couple of weeks now and I just recently saw a very nice picture of it: 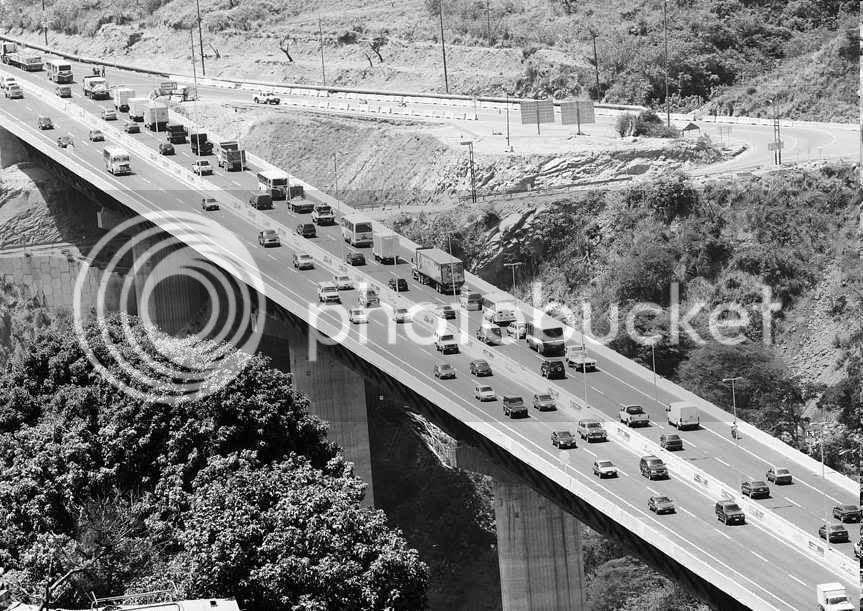 I like this picture because it shows the bridge doing what the bridge is supposed to do; taking people between Caracas and the coast.

Last week the coast in Vargas had some of its biggest crowds ever during the July 5th holiday. And according to Ultimas Noticias taxi fares to the coast from Caracas have dropped 20%. So for one last time congrats to everyone involved in building it.

Of course, in the construction boom that Venezuela is currently enjoying no sooner does one project finish than another gets under way. Construction is about to get under way on the number 5 line of the Caracas Metro. The ceremonial shovel turned earth last December. But now the real work is about to begin.

The reason why is that this baby has now arrived in Venezuela: 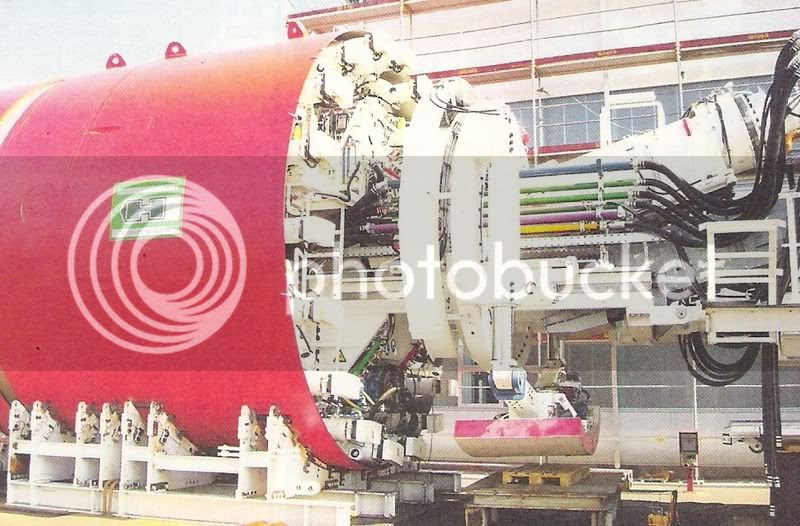 This perforation machine, made in Germany, will excavate the 4 mile long subway line. It is about 17 feet in diameter, 300 feet long and weighs 310 tonns. It cuts through rock and places concrete sections of the subway wall all in one process. It uses positive air pressure to keep water and loose soil out until the concrete walls can be put in place. It can advance about 50 feet per day.

Once the first tunnel is well under way a second machine will be brought in to start work on the second tunnel that will go along side the first. This subway line will cost $1.2 billion which is being paid out of the National Development Fund (Fonden) and will carry 270,000 passengers daily when it is completed in 2012.

On more mundane public works it was announced that so far this year 24,000 houses have been built by the government for low income Venezuelans. That is about 30% of the target for the year which is 82,000.

Part of what has slowed down the construction of housing is that the country is literally short of many construction supplies. Of course, with construction of stadiums, schools, hospitals, dams, bridges and shopping malls going on all across the country this is to be expected. To help resolve a shortage of concrete the government has just brought in 5,000 tonns of it from Cuba. So now it should be full speed ahead for housing in the second half of the year.

Hope you enjoyed this update. I just wanted to show some of what the rest of the country was doing while a few malcontents where out throwing rocks at people.
|
# posted by ow : 8:29 PM

Caddies are people too.

One of the principle reasons that the rich hate Chavez is he has made all the people they are accustomed to waiting on them hand and foot, maids, butlers, gardeners, messengers and on and on, more expensive, harder to find, and, it has to be said, uppity. No longer can people be found to work 15 hours a day doing whatever some obnoxious rich jerk wants for starvation wages. Under Chavez so many new jobs and “missions” have been created that people now have other options.

Of course, while this makes life far better and more humane for working people one can imagine the frustration of those used to having slaves at their beck and call. And you can be sure they know who is at fault for this dire situation as this rich opposition whiner makes clear:

Vuelvan Caras is a little dirty secret. In that mision people get paid, less than the minimum wage, but they do not have to work. It is enough for them to buy their cigarettes and beer. As a consequence Chavez has been increasing this group of jobless folks that do not need to look for a job and …, well, you can understand why service companies simply are understaffed….

Of course, this contributes to the red hot political situation in Venezuela. As the pool of readily exploitable people grows smaller and smaller because Chavez keeps reducing poverty, creating jobs, and increasing people’s access to education, the opposition is likely to get more and more desperate.

Worse still, from the opposition’s point of view, with Chavez empowering working class and poor Venezuelans through community councils and telling them that they have equal rights they are getting more and more uppity.

Remember last year when the eastern Caracas elite practically had a nervous breakdown over their golf courses, which hog up prime Caracas real estate, when they were almost confiscated to build low cost housing? Well, they dodged that bullet when the government decided to leave the golf courses in place.

Yet thanks to Chavez and the ideas he has put in peoples heads they still can’t enjoy their country clubs in peace. The reason is that the 300 full time professional caddies in Venezuela have decided they need to form a union to fight for decent pay and working conditions. Some have worked for 30 years yet they get no social security benefits because the clubs deny that they are workers.

Just yesterday 100 of them marched on the Labor Ministry demanding that their labor rights be recognized. Apparently the country clubs have refused to even negotiate with the caddies and are playing hard ball, having fired the leader of the caddie union.

This is just one more example of how the earth has literally moved underneath the feet of Venezuela’s upper class. It rightly feels boxed in on all sides and its obvious paranoia is more than justified. As anyone who has watched “The Revolution will not be Televised” will remember rich Venezuelans had to form armed self defense groups to protect themselves against their own maids after they made the blood chilling discovery that many of them were closet Chavistas.

And now the caddies have been infected by Chavismo?!?!?! This has to be mortifying. Remember these people have the power to totally destroy a persons handicap by handing them a three iron when they should be giving them a six iron!
For god’s sake, if you can’t trust your own caddie who can you trust?

Government newspaper Vea printed this small guide to cell based guerrilla warfare. The only strong critique I have is that they should have clearly stated to avoid all forms of electronic communications, not just cellphones. 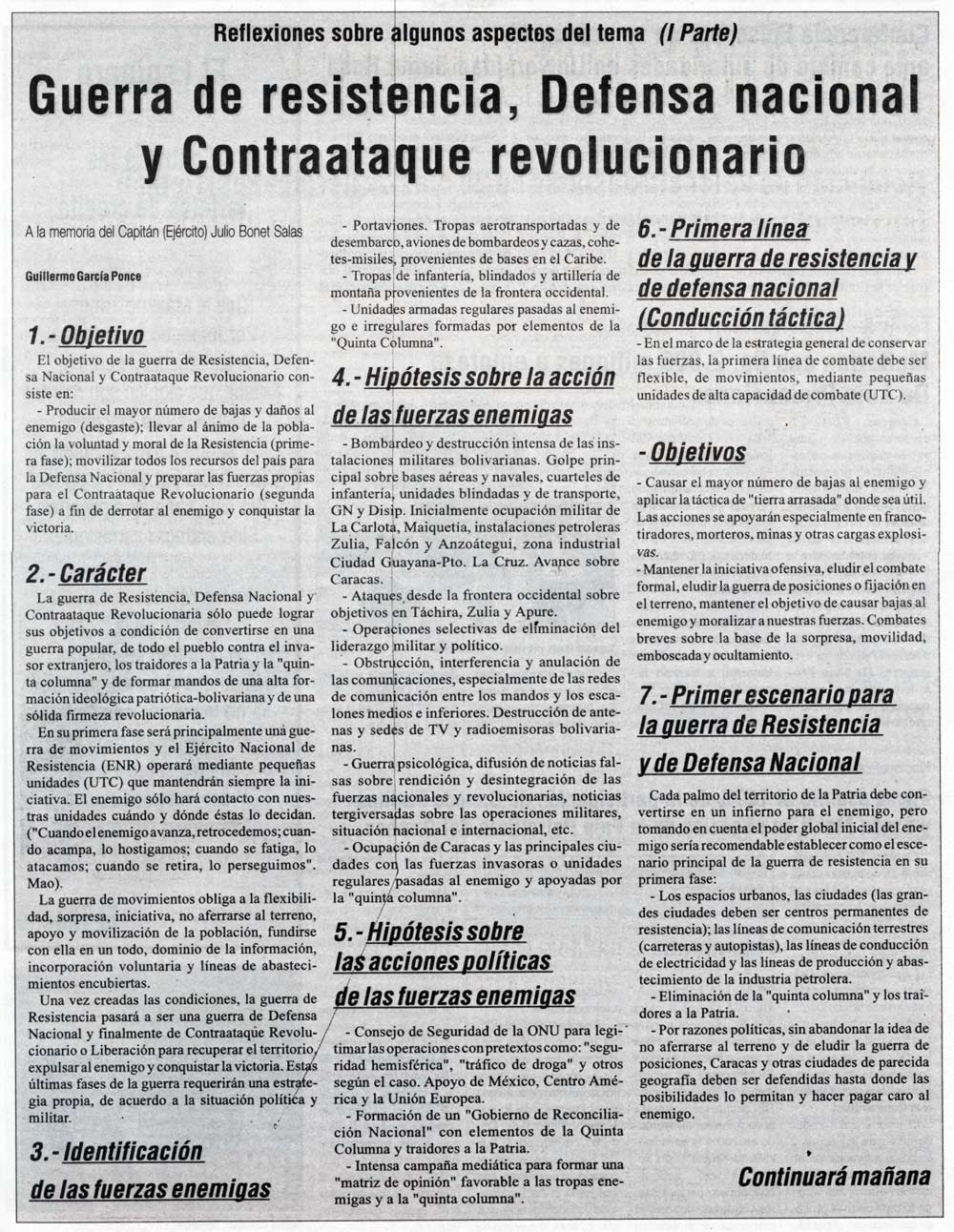 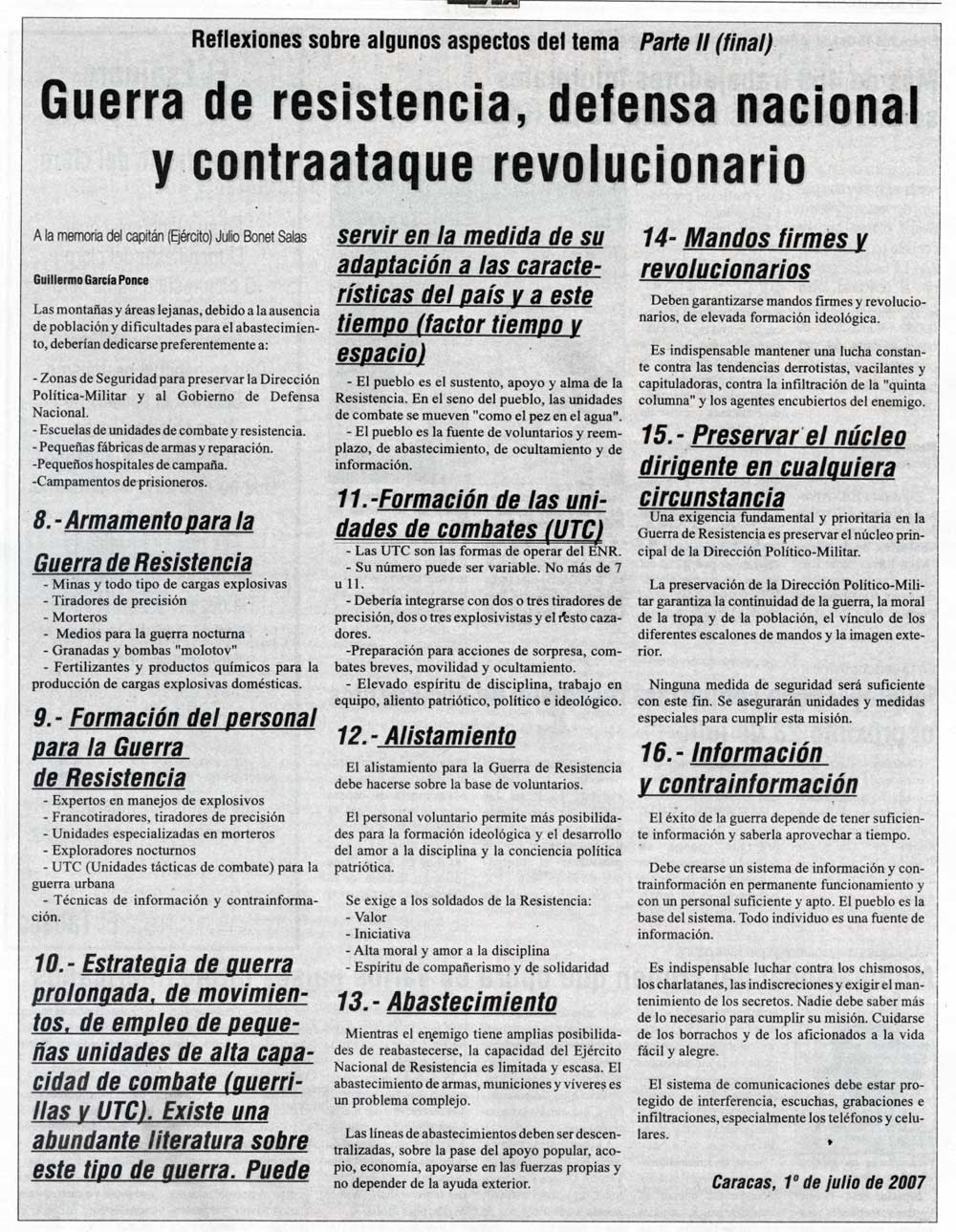 Damn that was quick

It seems such a short time ago that we were hearing about Venezuelan democracy, liberty and freedom of speech going down the drain. With the "closing" of RCTV freedom of the press was supposedly dealt a mortal blow.

Yet now we have this:

No your eyes are not decieving you, that really is the RCTV signal appearing on Direct TV in Venezuela. RCTV has arisen from the ashes and is now starting to re-appear on sattelite and cable networks in Venezuela.

Actually this just goes to show, it had never been shut down to begin with. It simply lost its little segment of the radio-electric spectrum that it got absolutely free for decades, courtesy the Venezuelan government. Now that it can no longer just suck off the governments tit it will have to pay its own way. Ain't capitalism a bitch.

Of course, all of this makes you wonder what this past month of RCTV pretending to be "shut down" was really about.

Was it all a big waste?

Were all those tires burnt in the street for nothing?

Were all those rocks thrown at the police pointless?

Did all the little rich kids parading around with hands in the air and duck tape over their mouths simply waste time that could have been better spent flying out to Los Roques?

Did Fox News waste its money flying a correspondent down to Venezuela for a week?

Did the opposition students embarrass themselves in front of the National Assembly and the whole country for nothing?

Did Reporters Without Borders waste valuable NED money (and my tax dollars) complaining about media repression that doesn't exist?

Sure sounds like Mr Marcel - if I can't play by my rules I'm taking my marbles and going home; uh oh, you mean I am going to lose money?, ok, here are the marbles back again - Granier has a lot to answer for.

As for the rest of us, it is just one more sorry episode of opposition histrionics that then turns out to all be about nothing. Hopefully you are all like me and are now immune to them.
|
# posted by ow : 5:00 PM