Which comes first, the chicken or the egg

As anyone who listens to all the opposition propogandists knows Venezuela faces a major food crisis with there being chronic shortages of such staples as chickens and eggs.

Of course, they always seem to be in a rush and leave out the second part of the story, which is that consumption of these food items is WAY up, hence the shortages.

Fortunately, today some reporter from El Universal had a little more time on his hands and gave a more complete story:

The national market has in recent months reported shortcomings in the production and distribution of poultry products due to increases in consumption.

In spite of the fact that companies in that sector are working at maximum capacity, and production has gone up 15% this year, it is not sufficient to satisfy the demand of Venezuelan consumers which in turn necessitates imports to make up the shortcomings in the national market.

This year, the production of chicken will reach 900,000 metric tonns and yet still reports a deficit of 8%.

So stated the president of PYMI Poultry, Simon Leal Alfanzo....

Leal explained that this situation is the result of purchasing power, especially that of classes D and E, having gone up 130% in the last three years which has permitted them to increase their consumption of these products.

So there you have it, peoples purchasing power and income are WAY up (we already knew that), which in turn leads to increased consumption, so much so that production can't keep up even though it too is growing rapidly.

Truth be told though, this is really something of a philisophical issue. With chicken and egg consumption way up how do you increase production of both? Do you increase the number of eggs for sale, pre-empting the number of chickens you can have, or do you restrict egg consumption for sake of letting people eat a few more kilos of chicken? You can have your chicken, but you can't eat all their eggs too.
|
# posted by ow : 6:21 AM

Try to be part of the problem, not the solution

For many decades Venezuela based the development of its oil industry on a number of big strategic advantages. The first of these advantages is the immense size of proven reserves of oil, both conventional and the extra heavy oil of the Faja del Orinoco.

The second advantage comes from our extraordinary geographic location at the northern end of South American and very close to our natural markets such as the United States, Europe, the Caribbean, Central and South America. We were very close to the markets and very far from the conflicts.

The third advantage is that we were perceived as a serious producer. We didn’t violate signed contracts, and when it was necessary, we renegotiated them with firmness, but without trauma for the parties involved. We were a democratic country where there was an equilibrium of powers. The was rule of law.

Venezuela was perceived as the safest and most reliable supplier of oil in the world. That position was won over many decades. For example:

A) During the Second World War, Venezuela supplied almost 60% of the oil utilized by the Allies, which was a determining factor in their victory. While Axis war machine was paralyzed for lack of fuel, the Allies had an inexhaustible supply coming from the Venezuelan ground. [ NOTE: This statement by Toro-Hardy is completely false. On page 379 of “The Prize” by oil historian Daniel Yergin it states “Altogether, between December 1941 and August 1945 the United States and its allies consumed almost 7 billion barrels of oil, of which 6 billion came from the United States”. But as we will see, the fact that he doesn’t know any history is the least of Mr. Toro-Hardy’s problems - OW]

B) During the Korean War the Shah of Iran fell. The supply of that country was interrupted due to the oil nationalization brought about by Mossadegh. Without the oil from Iran, which was required for the war effort, it was thought the Communists would take over Southeast Asia. On that occasion, Venezuela increased its production and helped resolve the problem.

C) In June 1967 the Six Day War exploded between Israel and the Arab nations. At the end of the conflict Nasser blocked the Suez Canal, which remained closed until 1975. All the oil of the Persian Gulf during that era arrived at market via the Suez Canal. After it was blocked it had to go around the African continent which was an additional journey of 12,000 nautical miles roundtrip and there were not sufficient tankers in the world to cover that route. Under those conditions, Venezuela again increased its oil production.

D) In 1969 Muhamar Qaddafi overthrew king Idrish in Lybia. A short time later the oil production of that country was interrupted. Once again, Venezuela increased its production which came to be more than 4 million barrels.

E) In 1973 there was the Yom Kippur war between Israel and its Arab neighbors. At the end of that war the Arab nations instituted an oil embargo against the West. Once again the world had to rely on Venezuela to meet their energy needs.

F) In 1979 the Shah was overthrown for a second time in Iran by the Islamic revolution of Khomeini. Oil production in Iran fell by more than three million barrels. Once again the oil markets looked to Venezuela.

G) In 1991 the invasion of Kuwait by Iraq occurred. When he withdrew Saddam Hussein set fire to all the oil wells of Kuwait and the United Nations placed an embargo on Iraq’s oil production. Venezuela reacted with an important increase in its own production.

As we were the only non-Islamic member of OPEC, we were always neutral in all of the aforementioned conflicts.

But now, one by one, we are destroying all of our strategic advantages. Lets see: We still have large reserves but every day we produce less. We still have the same extrodinary geographic location but it doesn’t help us as every day we are threatening our largest market that we will no longer give it even a barrel more of oil. With respect to contracts it doesn’t even need to be said, nor with respect to the functioning of institutions, the balance of powers, and rule of law. For the rest, we have stopped being a reliable supplier, because although we are still not an Islamic country we are making ever stronger ties with the most radical fundamentalist Shiite nation: Iran.

Part of the "problem"? What problem? The most curious aspect of this article is that although it is in reference to some perceived "problem" he never bothers to actually say what the problem is. How strange.

Of course, he assumes that his intended audience can read between the lines. They probably can and so too can we. Clearly the “problem” he is referring to is a tight oil market and the high prices that go with it.

But of course Venezuela exports far more oil than it consumes. Further, the oil industry accounts for about 80% of exports and 50% of government revenues. Suffice it to say, oil revenues are the life blood of the Venezuelan economy.

Indeed it is and it is a clear example of the anti-national position taken by the former managers and executives of that oil industry. Showing concern for their friends in the U.S. and other Western governments they view high oil prices a “problem”. But that those same low prices starve Venezuela of the money it needs to build its infrastructure, provide education and health care to its citizens, and help the still too many who are poor seems to be of little concern. As long as those who are at the top of the heap and work for PDVSA are fine, the rest of the country be damned.

It was this indifference to the welfare of their own country that led also led them to all but leave OPEC and ignore its quotas in a race to produce as much oil as possible so they could be seen as a “reliable” supplier. That in turn led to what we see in this graph where they collapsed prices to the point that when Chavez came to power Venezuelan oil was selling for $10 per barrel: 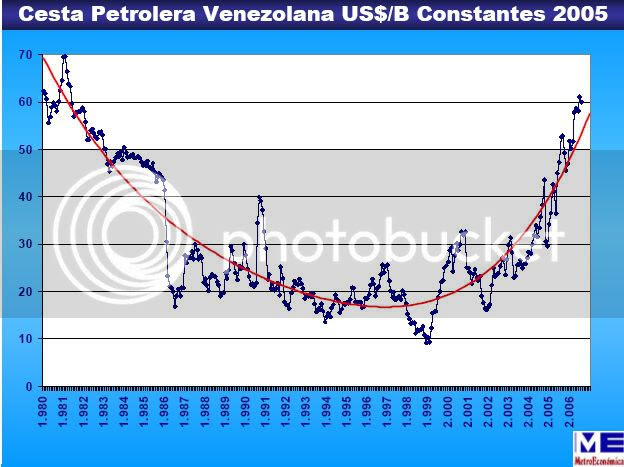 Clearly PDVSA and that people who ran it such as Mr. Toro-Hardy were not maximizing income for their owners, the Venezuelan people. It took Chavez to implement a 180 degree change in policies, cut production and support OPEC to again bring about what any oil exporting country should want, high oil prices. And the booming Venezuelan economy, rising standard of living, expansive social programs, and rejuvenated infrastructure have all come on the back of those rising prices. High oil prices is a “problem” Venezuela can learn to love.

So if Mr. Toro Hardy sees restricted supply and high prices as a “problem” maybe he should go work for those who have a similar perspective, just as many of his colleagues did. I’m sure many of the right wing, anti-OPEC organizations in Washington or Geneva or wherever will be happy to give him a job.

In the meantime, Venezuela should keep trying to be part of this problem, not the solution.
|
# posted by ow : 5:05 AM

Yesterday I finally saw a full set of poll numbers on Chavez from Datos, one the polling firms with the best track record in giving accurate numbers.

Cutting to the chase, Chavez's approval rating stands at 71.1%.

That is an astounding number, especially given all the supposedly "negative" events since last December - the formation of a single party for pro-Chavez groups (PSUV), the nationalization of major companies, all the "shortages", the "closure" of RCTV (BTW, the "closed" RCTV will magically re-open tomorrow and resume spilling its bile), and the little hate fest the Venezuelan opposition had over the past month and a half. Despite all that, despite all the rocks and insults hurled at the government, its approval rating remains at 71%!

In some other numbers from the poll 53.3% of those polled think the country has improved over the past 8 years, 18.5% think things are the same, while 24.8% think things have gotten worse.