Don't you wish this is how you were spending your weekend?: 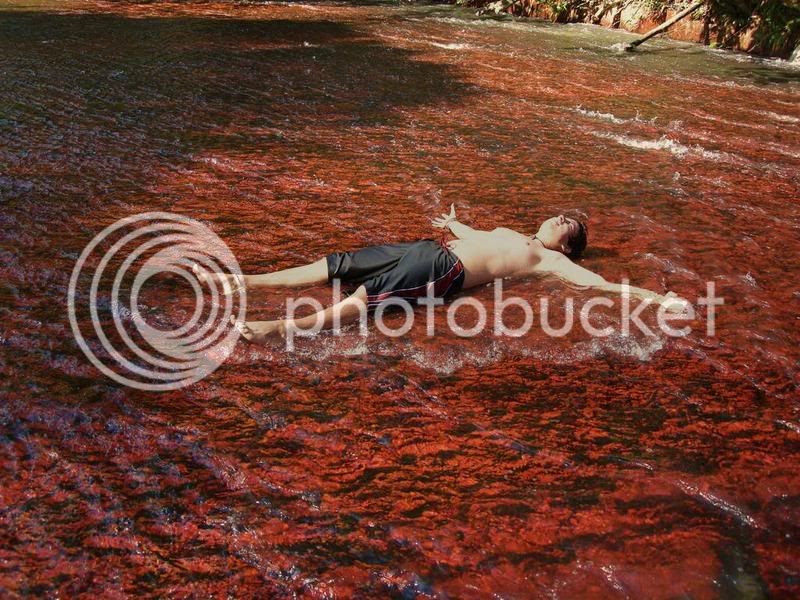 For anyone who has ever been to Venezuela's Gran Sabana that reddish water instantly brings back memories.

Anyways, our friends roadtrip across the spectacular Venezuelan countryside continues. Check it out here and here.
|
# posted by ow : 7:19 AM

Just imagine if Venezuela did this

Not content simply to overthrow a democratically elected government the powers that be in Thailand went out of their way to make it difficult for people to complain about it:

Thai censors lifted their ban Friday after five months of blocking the online video site because it had carried material seen as insulting to the country’s highly venerated king.

The site’s management has agreed to block any future clips that are deemed offensive to Thai culture or that violate Thai law, said Sitthichai Pookaiyaudom, the minister of information and communications technology.

Mr. Sitthichai said the agreement with YouTube — a site that allows people to post and share video clips — had been reached some time ago, but that there had been technical problems in implementing it.

“Any clip that we think is illegal, we will inform YouTube and YouTube will have a look independently,” he said. “If YouTube agrees that it is illegal for Thailand or against Thai culture, they will block it from viewers in Thailand.”

People outside Thailand would be able to view the clips, he said, just as they are able to buy books that are banned in Thailand.

So no critical YouTube videos. Oh, and just for safe measure no critical books either. Later in the article it turns out they also banned some movies. And the press release on all this from our friends at Amnesty International and Human Rights Watch is ... where?

Anyone who finds a statement by A.I. or H.R.W. criticizing Thailand for blocking this internet site please post it in the comments section. Hell, I'll even take a critical statement by the U.S. State Department on this.

Needless to say, I won't hold my breath. Hyprocracy reigns supreme in those "human rights" organizations.
|
# posted by ow : 7:06 AM

Time for some fluff

Traveling the Caracas metro you run into two types of advertisements. 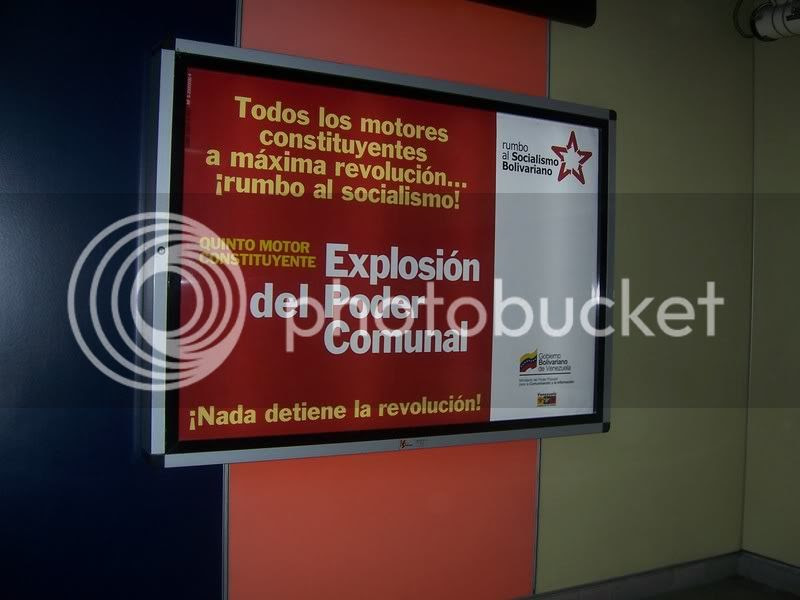 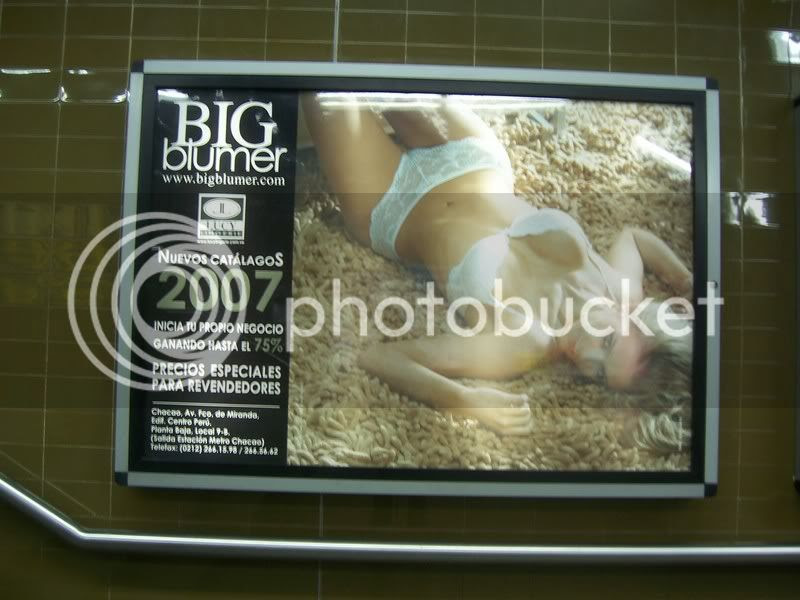 No principles, and worse still, no balls

As has been pointed out repeatedly on this blog the opposition never misses and opportunity to miss and opportunity. The vote on the consitutional reforms proposed by President Chavez is the latest example of this.

If you've been listening to the opposition on this subject you hear not all that much on the actual proposed reforms themselves. Rather what you hear is that the reforms should be split up for purposes of voting. That is, rather than voting on the entire reform in block they should be able to vote on each individual article as they claim is their right under the constitution.

Ok, that can be a valid point and maybe they should be able to vote reform by reform, approving some and rejecting others, if that is what they want. But that presupposes something very fundamental - that there are some of these reforms which they would like to see enacted.

That is, while they clearly don't want the indefinite re-election clause to pass maybe they do want the 36 hour work week one to pass. Clearly they must want SOMETHING to pass. Otherwise why insist on voting clause by clause?

After all, if you really don't like any of these reforms it is easy to say this whole package should be voted down and if Chavez wants any reforms approved he should go back to the drawing boards and come up with something better. Quite frankly there isn't a single proposal here that I will miss if it isn't enacted. The 36 work week is an economic absurdity, as I have previously explained. Most of the other proposals are so opaque or ambiguious it is impossible for me to tell what they will actually mean - so they are no great loss. And the one proposal I could actually support, removing term limits, is made a non-starter by Chavez's idiotic - and undemocratic - proposal to lengthen presidential terms to 7 years.

So even to this pro-Chavez blogger it is all very clear what should be done - vote the whole thing, IN ITS ENTIRETY, down. There you go, nice and simple.

Yet apparently the opposition finds it not to be so simple. Therefore maybe our opposition friends who lurk here can tell us which of the proposed constitutional reforms they favor. Personally, I think they like the idea of multiple vice-presidents appointed by Chavez. Maybe they think Chavez will be generous and appoint an opposition to person to one - certainly that is something more than they could ever hope to get through actual voting. In any event, if our opposition friends come clean the comments section should be interesting.

Of course, there could be another interpretation of all this. Maybe they DON'T really support ANY of the proposed reforms but because they never have the balls to say what they really think to the Venezuelan people they don't have it in them to say the whole thing should be voted down. They lack the courage and principles to, for example, tell Venezuelans that a 36 hour week won't really make them any better off.

But of course standing on principle and possibly damaging their already meagre poll ratings is not something they have the intestinal fortitude to do. So they won't. They will hide behind silly, cowardly and pedantic demands to avoid the REAL discussion.

Once again the opposition has nothing to offer Venezuela. Venezuela needs to vote down these reforms that will clearly do more harm than good. And it will be up to clear thinking Chavistas to do it. Venezuela certainly can't count on the oppition to save the day. Those clowns can't even save themselves.
|
# posted by ow : 3:32 PM

The guy is completely nuts, even if what he does makes perfect sense.

Simon Romero, the New York Times reporter based in Caracas, seems to be sinking further and further into a state of confusion. He clearly does not know what to make of the Venezuelan president.

The latest example of his confusion came in today's papers under the headline "Moving Clocks Ahead, Reaching Back in Time"

Mr Romero seems to think Chavez has lost his marbles after announcing building new cities, buying sniper rifles, and messing with peoples clocks by changing Venezuela's time zone. Because he finds it bizarre that these initiatives are often announced on a Sunday morning talk show he feels safe in his conclusion that the guy is unbalanced (oh, and I forgot to mention the most damning act of insanity; he changed the names of Venezuelan oil tankers from beauty queens to national heroes) and launches into a discussion on how he is the reincarnation of a turn of the century Venezuelan cuadillo. Of course, so as to make sure that his thesis is not contradicted he speaks only to people who share it - such as the international media's anti-Chavez darling Teodoro Petkoff.

[Note to Mr. Romero; your statement that Petkoff has "impeccable leftist credentials" almost caused me to choke on the ice cream I was eating. Petkoff has clearly been on the right of the political and economic spectrum since at least the 1990s as what he did during his stint in the Caldera government clearly showed. Saying that he has impeccalbe leftist credentials because he belonged to the Communist Party in the 1950s is like saying Ronald Reagan had impeccable trade unionist credentials because he was president of the Screen Actors Guild at one time - what he did to PATCO notwithstanding.]

But a funny thing happened on the way to the notion that Chavez is in need of therapy - even a New York Times reporter couldn't help noticing that many of the actual policies the guy carries out make perfect sense. As he notes Chavez steanghening OPEC was probably a good idea for a country that makes its living off of oil and his loaning money to other countries has helped weaken the grip of the IMF and World Bank. And truth be told, though a New York Times reporter could never get this past an editor, buying 5,000 sniper rifles probably makes a lot of sense, at least to any person who has ever heard of a country called Iraq.

Even playing with peoples time has things to recommend it. Venezuela has always had a problem with time - the even hour meridians for 4 hours and 5 hours behind Greenwich Mean Time lie on the extreme eastern and extreme western ends of the country respectively. Using either one of them to set time means a large portion of the country is way out of sink with the actual rise of the sun.

What to do? Simple, split the difference and make yourselves four and a half hours behing G.M.T.

Even though lots of people think Chavez is a crazed communist it really isn't that radical of an idea. As the following graphic shows it is what was done up until 1964: 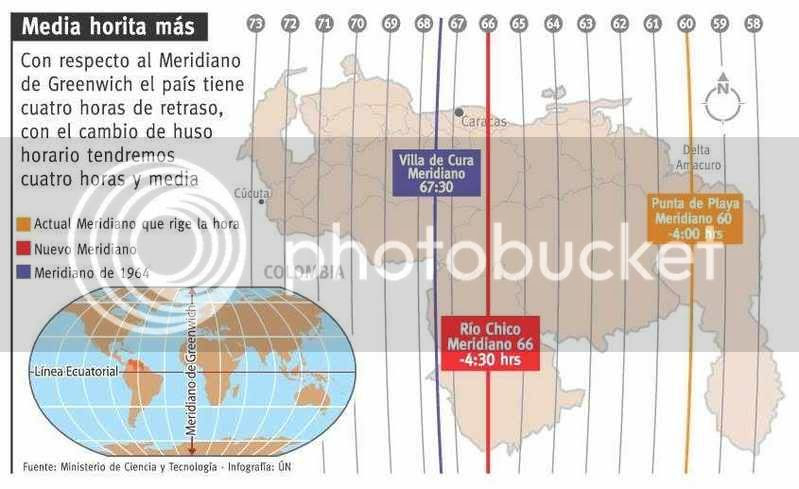 The orange line is the current meridian Venezuela uses, the purple one is what was used until 1964 and the red one is what will now be used.

Of course, I am no expert on what exact meridian is best for Venezuelan's metabolism and energy usage. Apparently neither is Mr. Romero. But at least he had enough sense to contact someone who is:

With such dreary assessments of Mr. Chávez’s rule coming from some quarters, the potentially positive effects of some of his ideas, even those concerning the country’s time zone, are sometimes overlooked.

Víctor Rodríguez, a respected astrophysicist in Maracaibo, said the measure was justified since it would cut down on energy consumption.

“I’m not a Chavista; I don’t have a position in the government; but speaking truthfully, this will benefit the country,” Mr. Rodríguez said. “Every country has the liberty to choose its own time zone.”

But don't be fooled - that this will "benefit the country" does nothing to change what everyone with their head screwed on straight knows - Chavez is nuts. With that in mind, come November 2008 I am voting for the nuttiest person on the ballot.
|
# posted by ow : 12:09 PM