But is the friend really drunk?

As a rebuttal to the preceding post let me just state one thing, it is difficult to ascertain the exact value of a currency. Comparing inflations can come close, but not precise enough (for starters Mark does not know what it was in 03). Comparing exports year by year is not good at all given growing internal demand.

The best method to date is using the Power Purchasing Parity index, not extrapolation. The reason why this works is because it goes to the heart of the matter rather than taking unnecessary steps, a devalued currency is attractive for exports because the non-fixed costs of producing two items of identical quality comes from labor and materials/parts etc, the latter is price dependent itself on more labor and material/parts etc. Leading labor to dominate this equation. If you can pay your workers less it means you can sell your item for less, but the only way they will tolerate being paid less is if their quality of life is comparable.

Here is where PPP comes in if a worker can pay cheaper rent, buy cheaper big macs, pay cheaper labor himself then the currency is devalued and he can be paid less than a worker in the US with a comparable standard of living. That is why China can crank out so much, their currency is way undervalued which means their workers get paid less while remaining content while they drive the US competitors out of business.

The Venezuelan government is not pursuing this strategy of heavily undervaluing the currency, but it does not mean that it itself is standing on the edge. There are a few things to keep in mind regarding the budget pronouncement:

1) They are trying to lower inflation, while I would be content that they just kept inflation at a steady annual rate, they clearly are interested in dropping it to single digits. Devaluing the currency would create a ripple effect, and an immediate effect on a lot of the food we import, which is a big deal.

2) When they do devalue they are not going to tell anyone, it will be sudden and fierce.

3) New currency will be undermined by the propaganda coup.

4) PPP indecies show we are close to dollar parity, but this gulf will grow wider.

5) Lastly the dollar itself is slipping, by having our currency pegged to the dollar it means that our currency is itself devaluating with regards to the Euro, Yen, Canadian, Australian $ etc. In 2003 the Euro was close to dollar parity. This is why the export gauge does not hold. We should be exporting more to the rest of the world.

The whole point is to increase manufacturing, and while you could belittle its 10% growth average, it is not really comparable to Telecoms or construction. Manufacturing is the BIGGEST slice of GDP (It is bigger than Oil). This is the key index to look out for, if it keeps increasing at a similar clip (big if) then we are golden regardless of exports. The government will likely devalue the currency if they notice a negative trend, they have done it twice before under the CADIVI regime, and it will probably be enough.
|
# posted by Flanker : 11:54 AM

Some would say that this blog, or others who have supported many of the changes President Chavez has made in Venezuela, should avoid being critical of the Venezuelan government and its policies.

I would say the opposite. Those who support the tremendous accomplishments of the Chavez government over the past eight years need stand against policies which clearly put at risk all of those accomplishments.

There is really nothing contraversial about this. Even pro-Chavez economists such as Mark Weisbrot of the Center for Economic and Policy research can clearly see it. From a report this summer on the Venezuelan economy we have this (highlighting by OW): 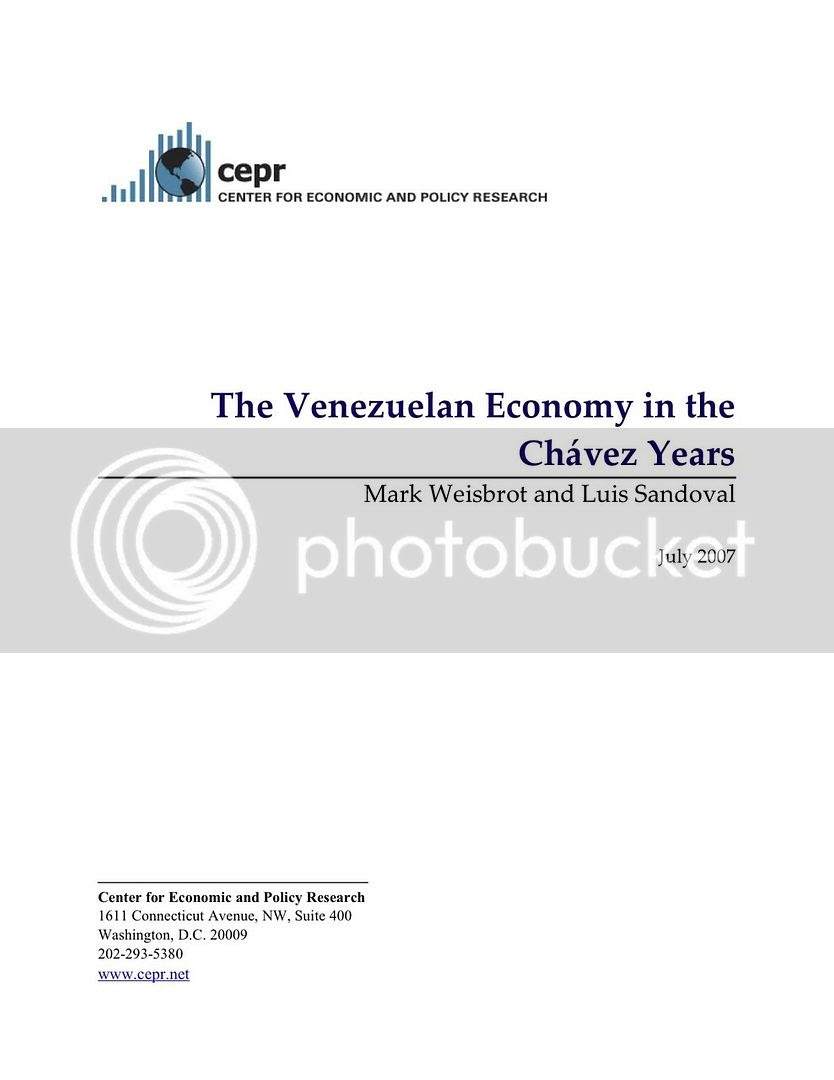 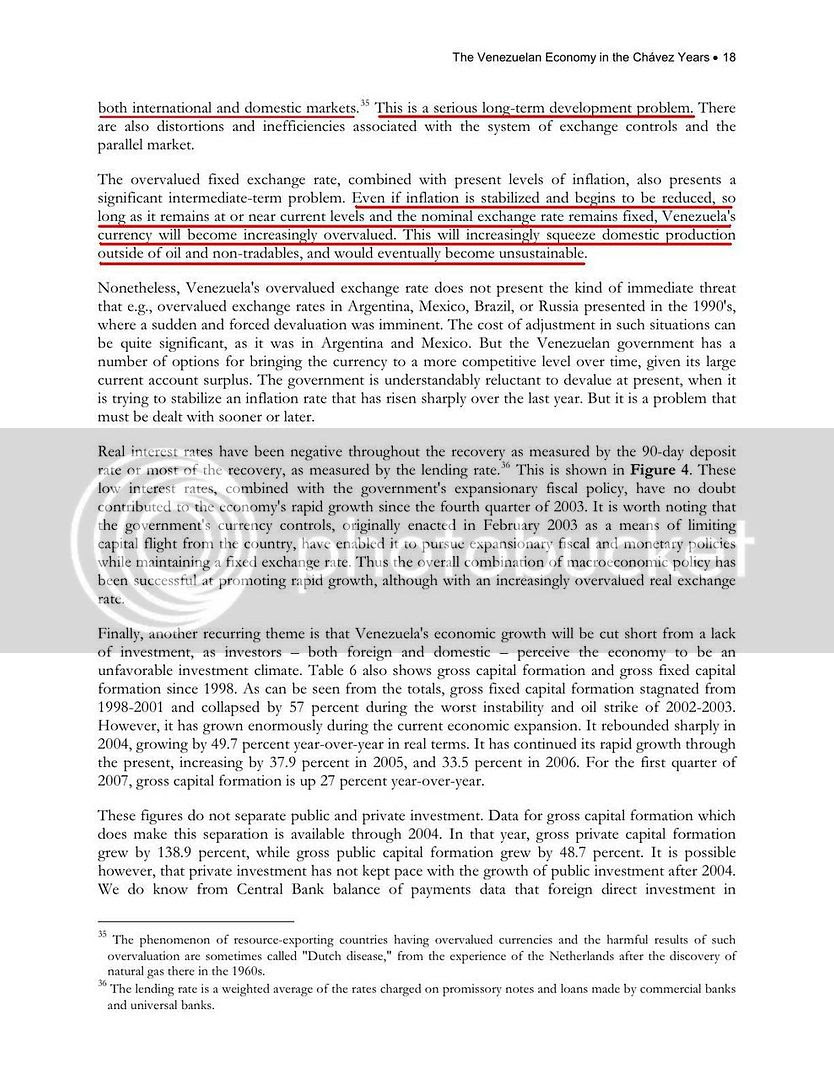 It really doesn't get much clearer than that. Yet from the Venezuelan finance minister yesterday we get this:

There will not be a devaluation because the economy does not need it. There is no economic need for a devaluation, which would only be a source of increased inflation and would only benefit particular interests.

I guess if you plan to live off of nothing but oil there is no need to try to build up your manufacturing base, reduce imports, and maybe even export something apart from oil. Yet right now, even with near record oil prices, oil earnings will barely be $2,000 per person this year in Venezuela - hardly enough to provide for a decent standard of living.

In reality, no one can seriously argue that Venezuela can get where it wants to go just by exporting oil. Yet its current economic policies are preventing it from developing the manufacturing industry it needs.

The more time that such self-defeating policies are pursued the less time and less chance of success a true development policy will have. This doesn't bode well for conserving the accomplishments of the past years, much less building on them.

Maybe Chavez and his ministers undestandably don't hear these things when they are said by people who wish them ill. But they need to hear them when said by people who have always wished them well. And people who understand these shortcomings need to speak out - friends of Venezuela's progress don't stand idley by while its economy hurt and an opening is given for the reactionaries to make a comeback.
|
# posted by ow : 2:07 PM

Venezuela's consumption boom is showing no signs of petering out. If anything it is accelerating.

From today's El Universal we learn that between July 2006 and July 2007 retail and wholesale sales in Venezuela are up another measly 35%.

These numbers come from Datanalisis which also tells us that 60% of the population think the country is doing well and 82% think their own economic situation is going to get better.

Of course, we also learn that in the same time period credit card debt has gone up 115% (I wonder if in Venezuela they issue credit cards with the slogan Patria, Socialismo, o Muerte on them?). Maybe instead of being referred to as "little Venitians" we should start calling them "little gringos".

Now getting somewhat more serious in a different article in the same paper we learn that most Venezuelans really are a LOT better off.

If you recall I have always fancied the graphs from Datos and AC Nielsen which show the real income of the poorest strata has gone way up - 130% since 2003 in fact.

No wonder they like Hugo. If Bush had doubled my income I'd probably think the guy was swell too (unfortunately he only seems to have doubled the income of investment bankers and arms merchants).

But again, seriously, Venezuelans, and particularly poor Venezuelans, live MUCH better now than they did before Chavez came to power. That is undeniable (despite all the opposition liars who WILL try to deny it) and it is great. But now it is time to take this to the next level and make sure this standard of living can be sustained and even increased no matter what happens to the price of oil.
|
# posted by ow : 6:45 AM