Although it was full of upbeat numbers, as it has been for the past few years, I thought what was left unsaid was more important that what it did say. No mention of the status of the Venezuelan currency, the effects of it on the Venezuelan economy and when it might change. Worse, there was no meaningful discussion of the future of the Venezuelan economy and how it will progress when the price of oil is no longer serving to push it forward. So on the whole, the report was bland, deficient, and not all that worth reading.

However, there was one table of worthwhile statistics and it is worth looking at it here: 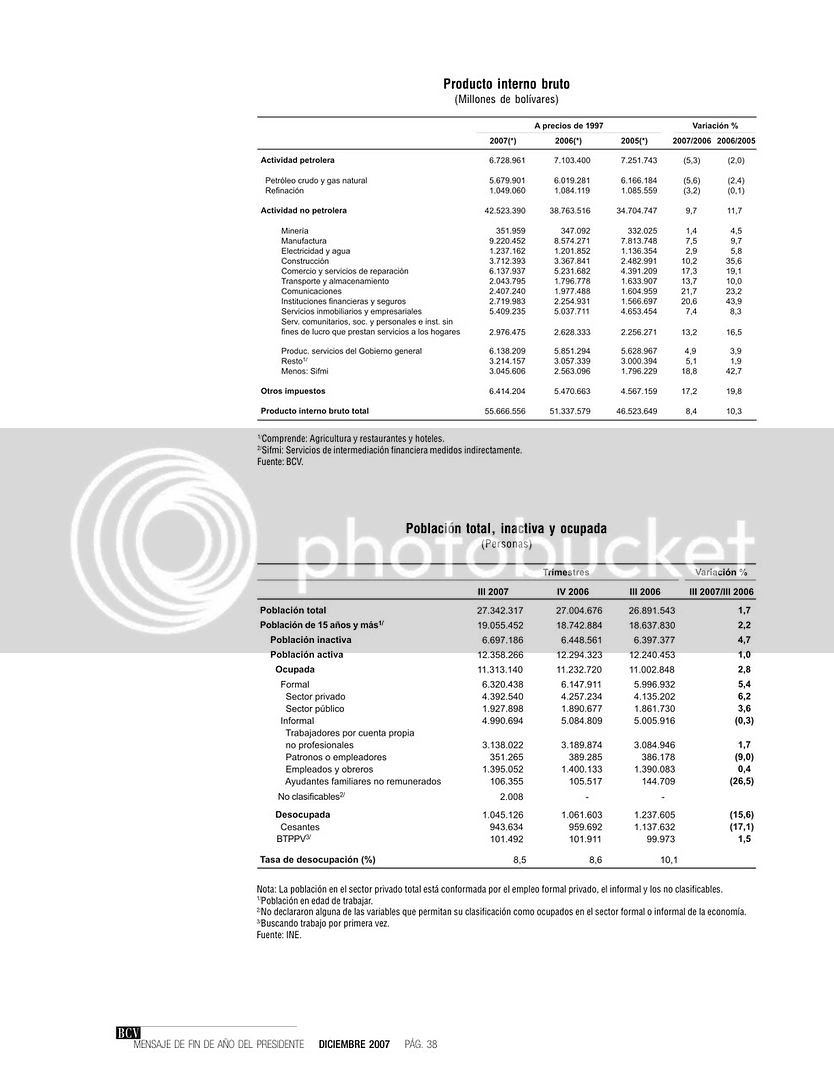 On the top we see how the economy and its different sectors grew in the past year. Overall GDP growth slowed from 10.3% to 8.4%. Probably the determining factor in why growth overall declined was that oil production also declined - 5.3% according to this table. That is not unexpected, Venezuela had to cut back in response to OPEC quotas and there were some operational difficulties in the Orinoco oil operations immediately after Venezuela assumed operational control of them. This decline in oil production in part offset an increase in prices and as a result oil revenues were fairly flat for the first part of the year.

There is nothing concerning in that - oil production has been increased as OPEC raised its quotas and prices are now at record levels. If that keeps up 2008 could be another very strong year for the Venezuelan economy.

However, look at the break down of growth by sector and you can see some REAL cause for concern. Note how in key sectors growth dropped off significantly:

In a growing economy that was well balanced and where investment was at appropriate levels growth rates in things like manufacturing and mining should be growing, or at least holding steady, not declining (and note commerce and communication held up much better). While one year does not make for a hugely worrying trend if these numbers continue to decline into 2008 it will show there is something really amiss with the Venezuelan economy its current boom notwithstanding.

On the positive side, the job numbers are certainly VERY good and dispel some falsehoods that have been consistently peddled about the Venezuelan economy. It has often been said that no, or few jobs, have been created during the current boom and that they have been disproportionately in the public instead of private sector. At least in 2007 that was not the case.

Year over year private sector formal jobs increased from 4.13 million to 4.39 million for an addition of almost 260,000 new jobs. Clearly the private sector is creating jobs. This represented an increase of 6.2%

Certainly that is good and dispels some myths. But of course, what is key is getting something than just the price of oil holding all this up.
|
# posted by ow : 6:59 AM