Where is the fire?

To listen to some because Venezuela has a fairly high inflation rate (though inflation seems to be breakin out all over these days) the world must be coming to an end. Or at least the sky must be falling.

Truth be told, I think Venezuela will muddle through. After all, in the decade before Chavez came to power inflation was several times worse than it is now and somehow the country survived.

In the past I've made graphs to show that fact which many who oppose Chavez like to ignore. But my graphs are primitive and ugly and maybe that is why some don't seem to grasp them.

Fortunately, someone made a much prettier graph of Venezuela's experience with inflation for the recent VeAmCham conference so I thought I'd cadge it: 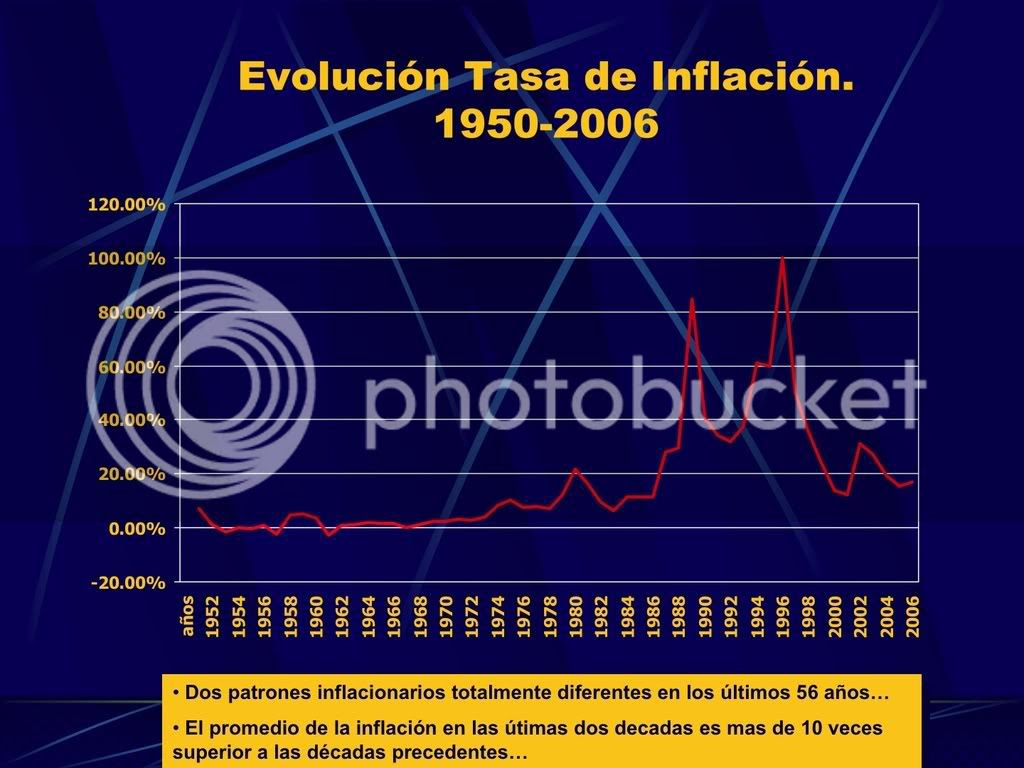 As you can see before Chavez came to office inflation was a LOT higher. In fact if those governments had ever managed to get inflation below say 30% they'd probably think they were the greatest thing since sliced bread.

Fortunately for Venezuela, Chavez was elected and went on to produce a dramatic reduction in the inflation rate. You would think the guy would get a pat on the back but then again knowing what his opponents are like we should understand why he hasn't.

And speaking of his opponents many of the same luminaries who fill the airwaves complaining about the current inflation rate were actually responsible for the economy when inflation spiked to 80 and even 100%. Petkoff, Torres, Naim, Haussman, etc all were in these governments that had truly outrageous levels of inflation. Not only that, but during much of the time that they had sky high inflation the economy was actually in a recession too!!!! What should that be called - hyper stagflation?

Chavez sure has helped create some real problems that need to be fixed. But this inflation non-sense is not very high up on the list. And the peanut gallery that screwed things up far worse when they were in office is best ignored. Chavez needs some good advice but he isn't going to get much of it listening to them.
|
# posted by ow : 10:32 AM

For those of you into the soap operish aspects of the Bolivarian project today the governor of the state of Miranda and a close confidant of Chavez, Diosdado Cabello, came out and denounced National Assembly deputy Luis Tascon as being an "agent of the empire". In an even more bizarre twist he claims Tascon went over to the dark side during a visit with Bill Gates where he had a chip implanted in him.

Funny, and for years now the opposition has been trying to convince us that Luis Tascon is the Venezuelan face of "fascism" because he hosted a data base to identify bogus signatures.

I dare say all this is starting to get a little confusing.

More worrisome for this blogger, he went on to say that the "false left is the real enemy of the revolution".

But of course, the real enemies aren't those who overthrew the government in 2002, nor those who shut down the oil industry, nor the NGOs funded by the U.S. government and definitely not those who spend their time shopping in Miami with cheap Cadivi dollars.

No, the real enemy are those in the PSUV who don't toe the party line. Or maybe anyone who says anything that is contradicts anything said on Alo Presidente.

This deserves another point. I think this is a demonstration of what happens when you have movements that are just led by one person or a small clique without grassroots democracy. The base can't play one of its important roles - weeding out the loons. That is probably why Chavismo is full of them right now.

As I have pointed out before the Venezuelan Constitution specifies that all candidates for office need to be chosen through internal elections - ie primaries. Yet not a single political party in Venezuela that I am aware of does that. Interestingly, this is one breach of the Constitution that the opposition never complains about - which just goes to show that for all their bemoaning Chavez's "autocratic" tendencies most of them aren't any different.

Personally, I am at the point where if I could vote in Venezuelan elections I would refuse to vote for any political party whose candidates were not chosen through a democratic selection process where the base of the party selects the candidate - even if it meant I had to stay home and not vote for anyone as would likely be the case.
|
# posted by ow : 3:37 PM

How I learned to stop worrying and love the peg.

the thing about the value of a currency is that it is difficult to extrapolate, even yearly forced devaluations on simple inflation calculations do not really solve much, there are other variables, among them our competition, the world's market is not the US in itself, there are a litany of other currencies that gain and lose value relative to the exchange rate. But year after year studies comissioned by the IMF showed that we are not the most expensive country in the region, I always scratched my head, but now I know why after visiting Brasil. The whole region is revaluating its currency.

The revaluation is most dramatic in Brasil, Chile and Colombia even if their inflation is lower, it should never justify this.

For whatever fault CADIVI has we can at least rest easy knowing the fact that we are pegged to a sinking currency, and even more thankfull that we are not revaluating it like the rest of our competitors.
|
# posted by Flanker : 7:40 AM