Yesterday, one of the generals supported by American's tax dollars had some observations about Venezuelan military spending:

The United States administration is concerned about the large amount of weapons Venezuela has purchased recently, said in Santiago the Deputy Commander of the US Southern Command, General Glenn F. Spears.

"We are seriously concerned about this large amount of purchases and the kind of purchases Venezuela is making," Spears said in a news conference.

According to the US official, who is in Chile attending the International Air and Space Fair, "Venezuela has gone far beyond what the defense forces are," Efe quoted.

"I would ask what is the threat against their sovereignty they are envisaging, what makes them require this kind of purchases, and why do they need a reinforced military capacity," he stressed.

Now, even though Venezuelan military expenditures are very low what their level should be is certainly open to debate (though the recent actions of the Colombian government is likely to have changed at least some people's opinions on this).

But, and this is a BIG but, this question being posed by an officer of the United States military is rather rich.

For those of you who are more visual here is a chart: 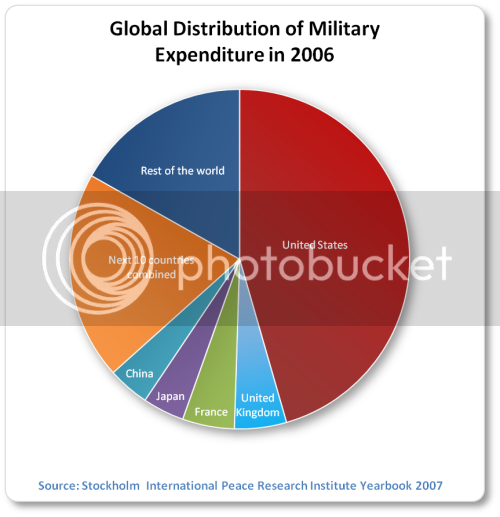 Again, as can be clearly seen, the U.S. spends almost as much as everyone else put together.

So, in general Spears terms - what is the threat that justifies this level of military spending by the United States? Why does the U.S. need to spend over $500 billion per year on its military? Who exactly is the threat?

Note what country is missing from that chart - the Soviet Union. It of course no longer exists. So much for the excuse that propelled military spending for the 50 yeras after WWII. Note Russia doesn't even get its own slice on that graph. Nor do either of the countries bordering the U.S., Canada and Mexico.

Looking at the chart who can we see that is a threat? The United Kingdom? France? Japan? China? Well maybe China could be in fifty years if they manage to wean their economy off of exports to the U.S. so that the U.S. couldn't immediately collapse their economy by stopping trade.

Suffice it to say, Venezuela, who is probably in the little section labeled "Rest of World" poses no threat.

Even worse, today it was pointed out that the Pentagon's black budget (this is the budget that the public isn't allowed to know anything about) has doubled to $32 billion in recent years. That is right, just the U.S. budget on secret projects (and probably some secret wars) is way bigger than most countries military budgets - though to be fair not much bigger than the Bear Sterns bailout.

What exactly is the threat that requires the elimination of any sort of transparency over this budget? Are they building weapons to fight a war in outer space? Maybe. But who else in the world even has a space program?

There sure are a lot of unanswered questions here aren't there? Maybe the honorable general who gets paid by American's tax dollars should instead of asking questions about Venezuela take some time to explain to the American public why so much money has to be spent on the military, and why so many of those expenditures have to be kept secret.
|
# posted by ow : 5:40 PM