It sure does pay to oppose Chavez

Who says no-one ever got rich fighting against Hugo Chavez?

Some 23 year olds sure have: 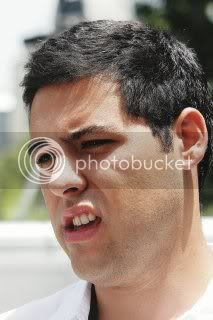 CARACAS, Venezuela (AP) — A U.S.-based think tank has awarded a $500,000 prize to the leader of a student protest movement that has posed a potent challenge to Venezuelan President Hugo Chavez.

University student Yon Goicoechea became a household name in Venezuela last year after he led protests that were widely seen as a key factor in the defeat of sweeping constitutional changes proposed by Chavez.

The Washington-based Cato Institute said it would announce the 23-year-old as winner of the Milton Friedman Prize for Advancing Liberty on Thursday.

Of course, given that his fame results from his being given an open microphone on national TV in front of the National Assembly (even if he did have nothing to say) the honorable thing to do would be to share the money with Celia Flores who invited him there.

Lets see if that happens.

Anyways, it would appear it is a lot more lucrative to be a right winger on campus than a left winger.
|
# posted by ow : 12:19 PM

In what has become a tragicomedy of sorts the opposition is splintering again, this time in the usual pathetic fashion, their electoral unity contract was thrown into the trash bin in such dramatic fashion that it borders on the bizarre.

Manuel Rosales has been for two years the de facto leader of the opposition, a term-limited governor of Zulia that wants to see his regional party grow to become the next silver medalist in the election olympics. Of course they want the silver medal, they are content with it, and in order to guarantee it they will sabotage the bronze medalist as the gold has multiple lap advantage.

So what did Manuel Rosales do? did he anounce he was running in another state? did he throw his hat for the national assembly and later the presidency? nope he decided to go back to his roots and become the next MAYOR of Maracaibo. I shit you not. He quite literally slowed down in order to push second runner up (Primero de Justicia) out of the race...

Of course the drama was not lost in the alternative
media, (the manistream opo media hardly touches it)

So why would the de facto leader of the opposition move back to his old home? rather than move up (or even laterally) in the food chain? Evidently because they presume there is not enough food to go around in the first place. The opposition is not challenging swing states/local governments. They are fighting amongst themselves for the sure things, as if it were the only spots they know they can win.

Take Baruta municipality as another example, this rich residential area of Caracas has a term limited Primero de Justicia mayor. Every single party has a candidate, and are campaigning hard to win this seat, PJ and Copei each has their candidate (both nobodies I think) and late comer UNT has brought in a media heavyweight Geraldo Blyde (former member of PJ who along Leopoldo Lopez defected to UNT). So why does UNT send their "stars" to safe candidacies yet throws Stalin Gonzales (student "leader") to the wolves den (Libertador municipality)? The answer would be obvious by now.

PS the only drama is in Chavismo's side with Luis Tascon pulling a Lieberman.
|
# posted by Flanker : 6:20 AM

One assertion that I've seen time and again on opposition web-sites, in the Venezuelan media, and in the U.S. media is that employment at the Venezuelan state oil company, PDVSA, has somehow exploded. The numbers I have heard go up to 100,000 employees and presumabely this is an example of Chavista inefficiency and featherbeading.

Needless to say, if one actually reads the 2007 Financial And Operational report for PDVSA posted on their web-site (and please note all those who used to whine about PDVSA financial statements not being produced on time seem not to have noticed that this report is both on time and amazingly informative) you can easily find PDVSAs employment numbers going back to 2002. Just to make it even easier it is on page 28.

Here is a chart of PDVSA's employment treds:

The yellow bars represent total PDVSA employment. Note that while there has been an increase there has certainly been no dramatic increase in the number of employees - the total number went from just under 70,000 to just under 80,000.

And of course this increase is to be expected within the operations of the oil company as PDVSA, just to name one example, assumed control of the operating agreement oil fields in western Venezuela and most of the employees of the foriegn oil firms became PDVSA employees. A similar process is happening with the Orinoco Belt Strategic Associations which have also been taken over by PDVSA. So this increase in employment makes perfect sense within the context of PDVSA's oil operations.

Now, there have been changes within the composition of PDVSA's workforce. The purple bar reflects the number of regular PDVSA employees who are on its payroll and recieve full benefits and protection accorded to Venezuelan workers under the law. This number has increased substantionally.

The red bar represents contract employees who are not official employees of PDVSA and who do not get full benefits from it. This number has steadily declined since the oil strike necessitated its increase as employees have been put on the regular payroll. Over time this type of employee should go to zero as all should be regular PDVSA employees with full benefits.

In sum, we see that there has been no significant increase in employment at PDVSA and certainly none that is not warrented by PDVSA's increased oil production responsibilities. Further, we see that PDVSA has been moving employees out of the temporary contractor status and into regular employment as it should.

Finally, there was one additional item on this topic of human resources for PDVSA. And that is the top ten executives of PDVSA were collectively paid $2.5 million dollars. This comes to an average of $250,000 per executive. This is an increase over what it was in the recent past and is at the upper end of what is reasonable - that is while these salaries are probably defensible (and VERY moderate compared to what the executives of a comparably sized private company earn) they should not go any higher than this.
|
# posted by ow : 8:39 AM