Various "non-governmental organizations" and think tanks have over the years set up surveys to rank various countries on things such as "economic freedom", "political freedom", "human rights", "competativeness" and in one instance at least "failed states". These surveys are generally carried out by very conservative organizations and rather predictably point to the U.S., western Europe, and the Asian Tigers as good and most everyone else as bad.

Given that these surveys are highly subjective and don't fully reveal how they arrive at their rankings they are of dubious reliability and are probably best ignored. Yet the media often trumpets their findings as though they were some sort of objective truth and certain governments are praised while others are attacked. Most likely that is their express purpose.

One organization that releases a famous ranking is Transparency International and their ranking is on corruption. They list most all countries from what they consider to be the most transparent all the way down to what they consider to be the most corrupt. Predictably, being low on this ranking is taken as concrete evidence of out of control corruption so countries such as Venezuela, which have a very low ranking, are taken as being in fact very corrupt, never mind that no actual evidence is ever presented.

However, an interesting thing happened recently. Transparency International released a major report on the international petroleum industry where in the ranked over 40 major oil companies: 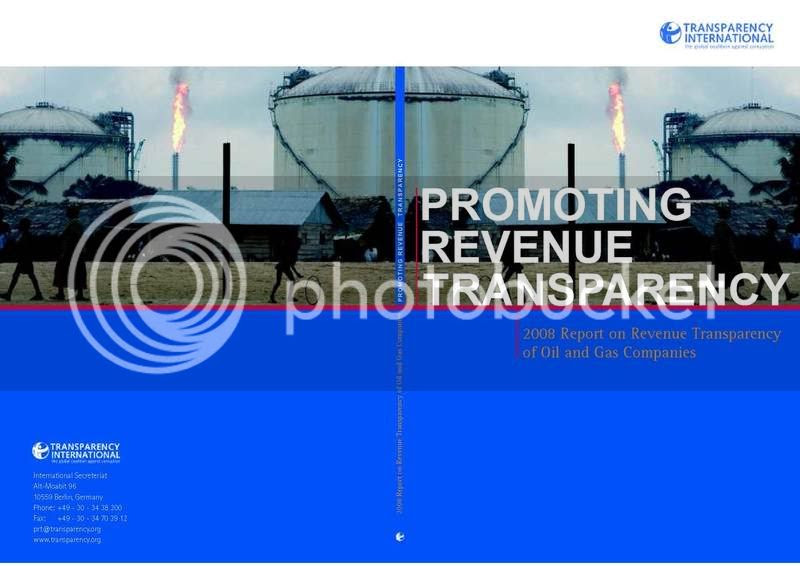 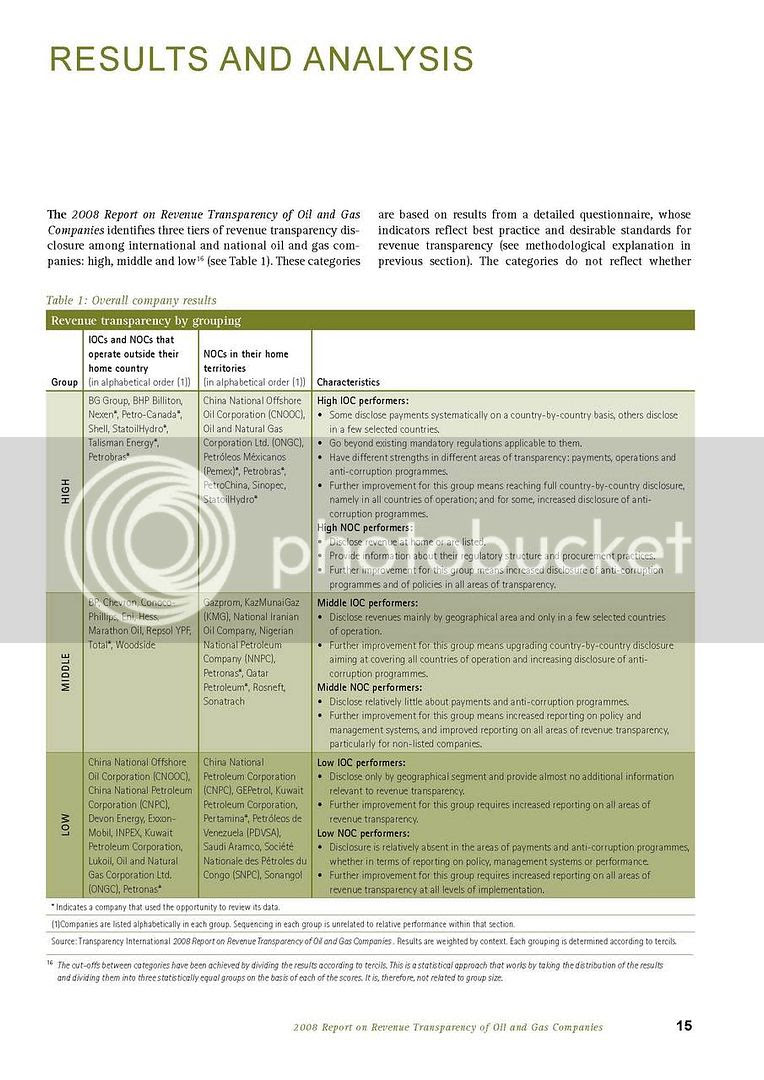 I found that to be rather curious as I follow PDVSA quite closely and I have always found them to be highly transparent. Every year they publish a full financial statement that is audited by an outside auditing firm and which gives hundreds of pages of financial and operational data.

But this time it turned out to be possible to actually review what T.I. did. In an interesting twist with this report, Transparency International published a full and very detailed explanation of their methodology and gave the raw data that they used to compute the rankings. Being curious as to how their determination could differ so much from my own perception of PDVSA I decided to review it.

Here are two of the listings of information they were looking for: 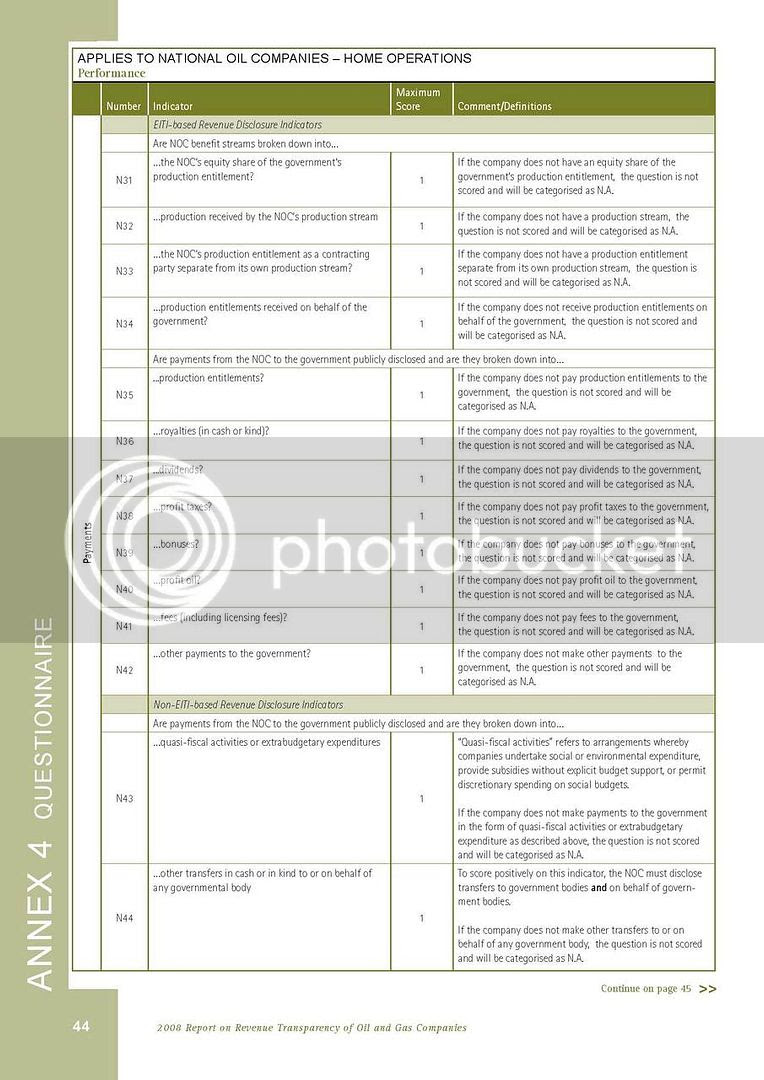 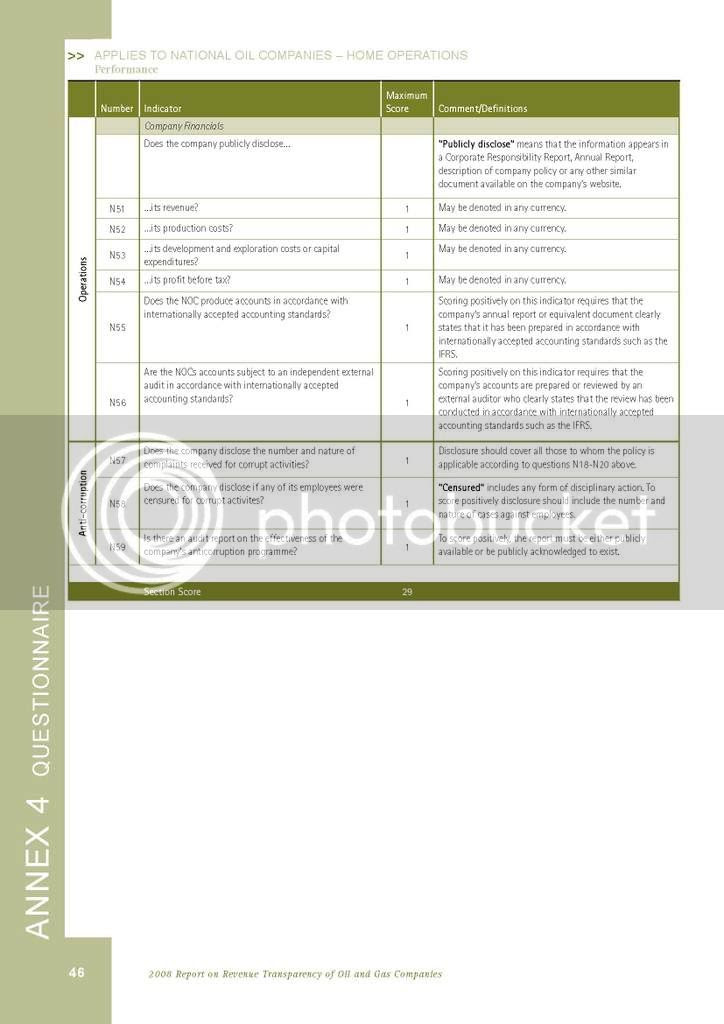 Note they are looking for very basic things. For example they ask:

Are payments from the NOC [National Oil Company - ow]publically disclosed and are they broken down into...

Does the company publically disclose...

N53 ... its development and exploration costs or capital expenditures?

N55 ... does the NOC produce accounts in accordance with internationally accepted accounting standards.

N56 ... Are the NOC accounts subject to an independent external audit in accordance with internationally accepted accounting standards?

These things that T.I. is looking for from each company are certainly very basic and indeed any company that aims for transparency should make them public. 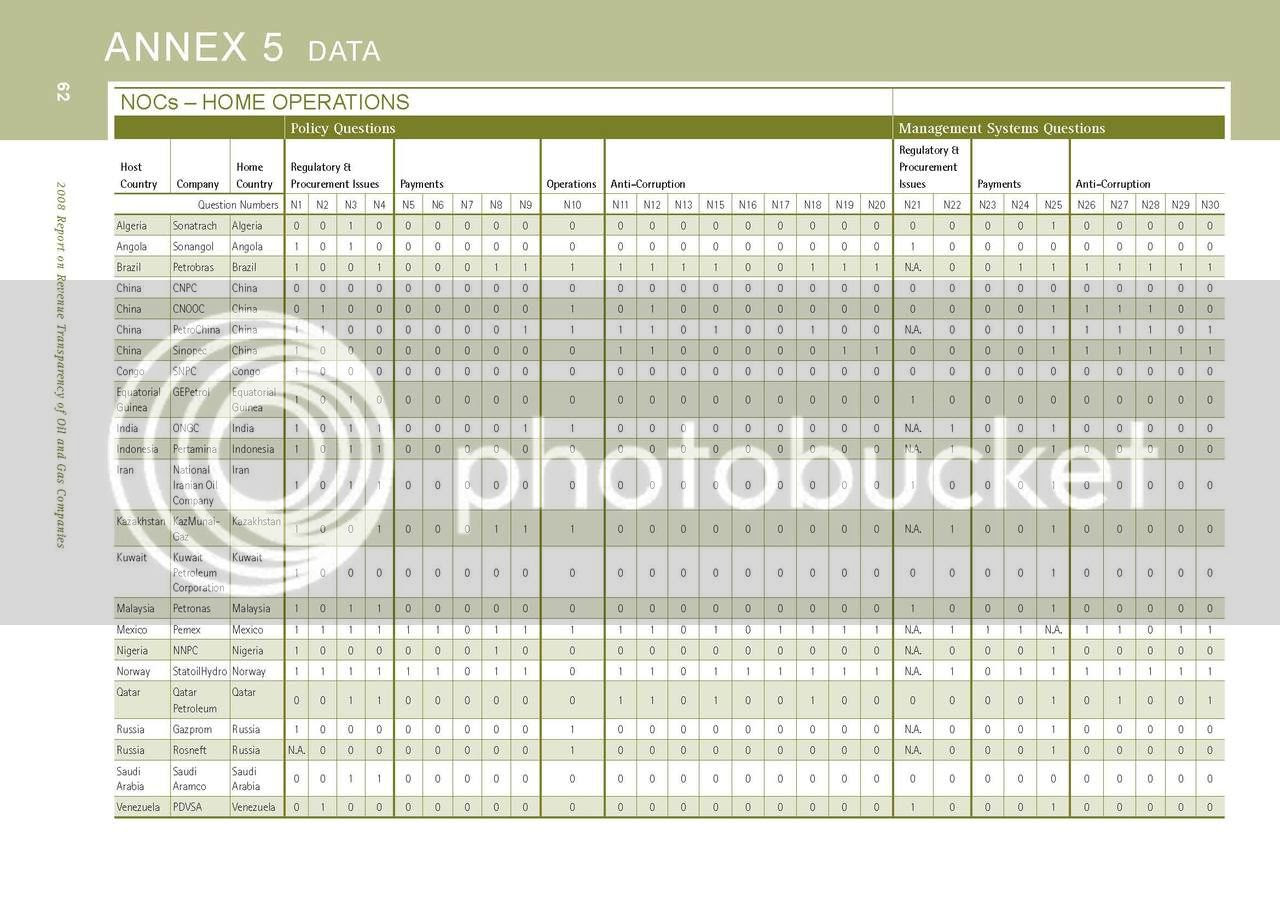 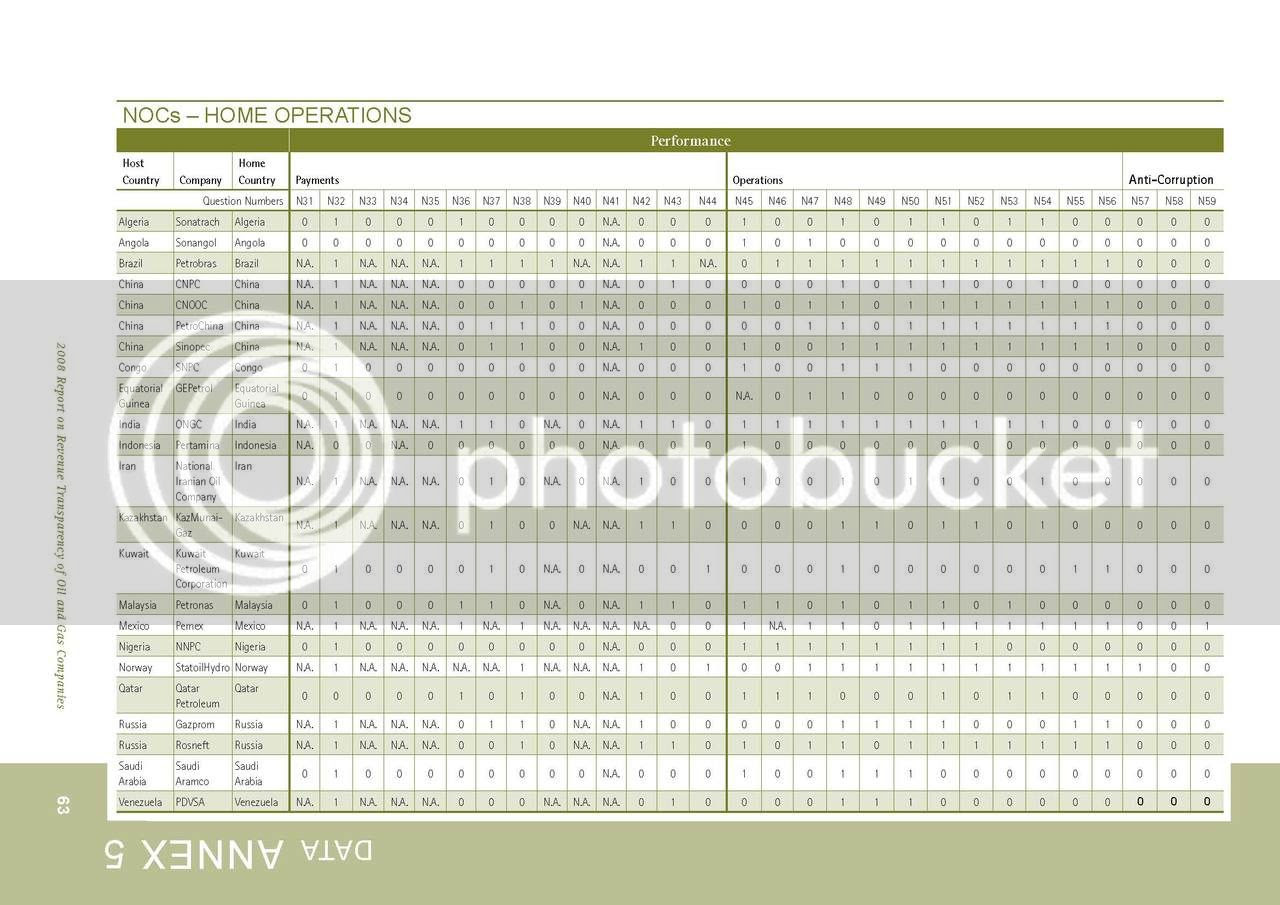 PDVSA appears on the bottom of these tables where you should be able to easily note that according to Transparency Internationl PDVSA does not make public any of the information that I detailed above!! Look in the boxes for the above listed numbers and you will see all zeros indicating that according to T.I. that information was not in the public domain.

That is right - according to Transparency International PDVSA does not say how much it pays in royalties, taxes, what its revenues are, what its production costs are, does not have audited financial statements, etc., etc.

It is simply stunning that Transparency International would have that as its finding for PDVSA because in point of fact PDVSA makes all that information and more public.

Just go to their web-site, click on "Informes Financieros" (on the right hand side of the page), and you will all their audited financial statements from 2007 back to 2000. Open any of those financial statements and you will find for that year ALL of the information that Transparency International claims PDSVSA doesn't make public. Just for the hell of it I opened the 2007 audit report and looked how it compared to T.I.'s claims:

T.I. claims PDVSA does not disclose what it pays in royalties.

T.I claims PDVSA does not disclose what taxes it pays to the government.

T.I. claims PDVSA does not disclose what its revenues are.

Really? On page 127 its says that revenues were $96.242 billion in 2007 (and they even break it down by external and internal sales if the idiots at T.I cared to know).

T.I. claims that PDVSA doesn't have its accounts done in accordance with international accounting standards.

Really? On page 148 the auditors say the financial statement was prepared in accordance with "international accounting standards".

T.I. claims that PDVSA doesn't have an audit done by external auditors in accordance with international standards.

Really? On page 148 we see that the financial statements were audited by Alcaraz, Cabrera, and Vazquez, the Venezuelan affiliate of the U.S. accounting firm KPMG and they clearly state that the audit was performed in accordance within "international auditing standards".

I could go on and on with this but I think the point should be abundantly clear.

Transparency International said that PDVSA has a "Low" level of transparency based on claims that information is not made public when in fact that very information is very easily found in a couple of minutes on PDVSA's web-site.

Clearly this report by Transparency International is fatally flawed and its conclusions cannot be taken as valid because they are based on data which is wrong.

If Transparency Internional was a serious and honest organization they would retract this report, redo it, make sure they got their underlying data right, and then release a new ranking. Then, and only then, might this ranking be worth something.

How could they have messed this up so badly? Two things are worth noting.

The data were gathered by consultants. The data-gathering process did not include interviews with any of the executives or staff of the companies, but was based on desk-research of publically available company documentation.

Maybe that explains it - without actually speaking to any PDVSA staff the consultants couldn't figure out that to get financial information they should click on the "Informes Financieros" button on the web-page!!

[As a side note, this use of un-named and un-accountable "consultants" bears an striking similarity to the bogus exit polls during the Venezuelan recall referendum carried under the name of a prominent U.S. polling firm but which turned out to have actually been done by the an stridently anti-Chavez NGO called SUMATE. Maybe T.I. like to be able to say "oops, not our fault, the consultants messed up"]

Second, look at the table of what information used to compile this report: 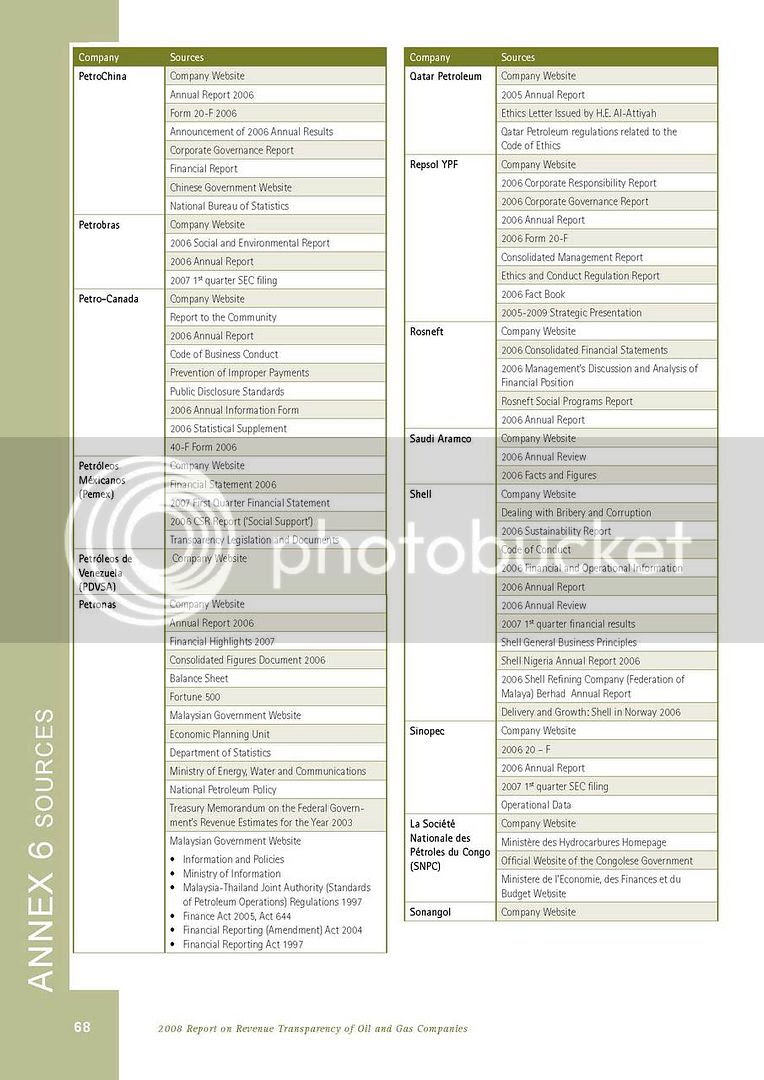 Note that for other companies they used not only the company web-site but their financial reports, other government web-sites, SEC filings, etc.

The bottom line is Transparency International is clearly either terribly inept or patently dishonest. Any reputable organization would immediately rescind such a flawed report. Yet to date it is still on the Tranparency International web-site and serves as the basis for bogus reporting like this.

This sort of makes me wonder:

“I think in Venezuela you can't speak of democracy because all branches of government are controlled by one single branch,” he said in an interview with The Associated Press. “It's growing dangerously close to a totalitarian regime.”

If I said some equally stupid and silly thing about the United States government would the Cato Institute give me a half-million dollars?
|
# posted by ow : 2:36 PM