This will really solve the problem - NOT.

On Wednesday Chavez announced his new economic package that was meant as a response to Venezuela's slowing economy.

As we've seen the main culprits in undermining the Venezuelan economy are a horribly out of line exchange rate, the government spending billions buying up existing industry rather than investing in new industry, and cutting back on bank lending in a futile effort to stem inflation.

So what does Chavez do to rectify the situation? Simple, he cuts taxes!! You can watch him here:

Once again, there is so much stupidity here it is hard to know where to begin.

First, he makes it sound like the government has so much money that it can easily afford to cut back on taxes. Really?!?!? That would be news to the millions who live in slums with no paved streets, no piped water, no sidewalks, no electricity... nor any other government services. Let me tell you stomping through foot deep mud trying to get from someones home to the nearest paved road isn't exactly fun and the people who have to do it every day would be a little perplexed at the notion that the government is overflowing with money.

Chavez then falsely touts this tax reduction on the rich as a anti-inflationary measure. Really? Taxes are inflationary and cutting them reduces inflation?!?!?!? Hell, I never heard even Reagan or Bush come up with that one. Then he talks about some taxes being regressive - maybe, but one on financial transactions when only maybe the top half of your society ever deals with banks sure isn't regressive.

This one goes straight to the bottom line of those who have the most. That is probably why we haven't seen this many rich people standing and cheering in Miraflores since ... you know when.

Oh, ok, there were other measures. He is going to set up a industrial development fund which Venezuela will contribute $500 million to (when it is expected to get $75 BILLION from oil revenue this year so this will be less than 1% of the oil income). Who knows, maybe that will nudge manufacturing growth up to a full 2%!!

Then he says importers of some goods won't have to fill out all the lousy CADIVI forms and wait on line. That is another one sure to have them jumping up and down.

In sum, while Venezuela faces some very serious economic problems, Chavez in weaving, and bobbing, and ducking for hours about the economy managed to never mention a single one of them. That takes real talent! A lesser person might by mistake at least touch upon one of the real problems.

I guess this is what happens when you spend most of your adult life trying to get power with little thought as to what you will do when you get it.
|
# posted by ow : 5:53 AM

Given that the Venezuelan economy has abruptly slowed, even in the midst of a record setting oil boom, the competence of those formulating Venezuelan economic policy has been called into question. However, they are not without their defenders.

To get an idea of the thinking of some of these officials lets look at an interview conducted with Haiman El Troudi who is currently the Minister for Planning and Development. In that position he is probably the top Venezuelan official in charge of the economy other than Chavez himself of course.

What follows are excerpts from an interview that he gave with Ultimas Noticias on June 1st, shortly after the 1st Quarter economic data was released:

Ultimas Noticias: Why did the the rate of growth of the economy decrease in the first quarter?

El Troudi: There are many factors, but we can identify three main ones. One, the world situation: recession in the United States, increase in the price of natural resources, use of food to make fuel, high demand in China and India, a high level of inflation world wide, and a migration of capital to speculative activities. All of that has caused a deceleration in the rate of growth world wide. Nevertheless, Venezuela has now had 18 quarters of growth.

These assertions are so off the wall and bizarre it is hard to know where to begin. The question was why growth in VENEZUELA has slowed and the guy starts talking about recession in the United States as if that is somehow dragging down Venezuela?!?!?

Then he even more bizarrely talks about price increases in natural resources and high levels of demand from China and India as if those things somehow hurt Venezuela. Does this man really not realize that Venezuela makes virtually all of its money off of selling natural resources and that high demand and high prices for those resources HELP Venezuela not hurt it ?!?!?! So the points made here indicate why growth in Venezuela should be accelerating, not decelerating.

The only grain of truth to what he said is that high food prices do hurt Venezuela given that it is a net importer of foodstuffs. But given that it makes ten times more money from selling oil than it has to spend on food it is still WAY ahead of the game with high commodity prices and from that there is no reason for the economy to be slowing.

Another structural element that we are living through now are shortages and scarcity, reduction in the production at SIDOR and in the cement industry, and that we are coming off of an inflationary peak from last year.

Shortages and scarcity are hardly the result of extraneous factors - it is government polices that created them. Production at SIDOR and the cement industry may have been down but would that have created such a large slowdown in industrial production? Its doubtful. And inflation doesn't automatically cause your economy to slow - other countries have combined high inflation rates with high growth.

And third, seasonality. All the first quarters of the year start out slow.

Ok, this is actually the scariest part of what he said because it means he doesn't even understand the economic statistics that his own government puts out.

So the Venezuelan economy slowed dramatically this year not because of the world economy, not because commodity prices are higher, and certainly not because the year always starts out with low growth. Rather, the slowdown must have something to do with the governments economic policies. But rather than talking about those policies and how they may have contributed to a slowdown El Troudi simply reveals he doesn't understand very much about Venezuela's economy and even less about its economic statistics.

Ultimas Noticias: Is the government interested in slowing the economy to reduce demand and consumption?

El Troudi: We want to have permanent and sustained growth during long periods in order to achieve a minimum of growth which would permit the consolidation of our social programs. I believe that we should keep increasing at a rate above 2% for at least 20 years.

Talk about low expectations!! Growth of 2% is a complete and utter failure. Venezuelan population growth is 1.5% per year so an economic growth rate of 2% would constitute almost no real growth at all. It is simply stunning that the Planning Minister could find such a slow rate of growth acceptable or even good.

Furthermore, this is either a dishonest comment by El Troudi or reveals an amazing level of ignorance with his own governments policies. It is well known that the government DID carry out specific policies that were to reduce inflation but at the same time would reduce growth. For example, they changed interest rates to reduce bank lending and increased the amount of reserves banks needed to keep on hand. The government clearly had the view that inflation was public enemy number one and that were going to try to reduce it even at the cost of lowering growth.

Personally I never agreed with that policy. When you are a relatively poor country you have to maximize growth rates and if at the same time you have some inflation it won't kill you. The number one priority should be to have the country develop and become wealthier and you do that by growing as fast as you can (oh, and from the May numbers we see their anti-inflationary measures don't seem to be working anyways).

The interview goes on but I think this is enough to show that this person certainly isn't going to set the economy right. To be able to fix something you first have to understand it and clearly El Troudi doesn't.

With advisers like this no wonder Chavez makes all his own decisions. Not that he necessarily understands any of this either, but I doubt he could know less than this guy.
|
# posted by ow : 5:12 PM

No wonder no one buys anything besides oil from Venezuela

Ever wonder why you buy shirts from Pakistan, flowers from Colombia, cars that are made in Mexico, semi-conductors from Vietnam but nothing from Venezuela save oil?

Probably because if you have to ask, you can't afford it - literally.

Because Venezuela makes so much money from oil, and because it chooses to use a lot of that money to prop up an overvalued currency there really isn't a single other product from that country that could even come close to competing on world markets.

This isn't unique to Venezuela - it is actually a well known phenomena that has happened to many countries and carries the name "The Dutch Disease". Essentially, it is where a huge amount of revenues from one procuct (generally some natural resource such as oil) come into a country rapidly, increase the value of its currency, and make other potential products from that country non-competative price wise.

However, it is one thing to understand this intellectually and it is something else to go to a country like Venezuela and have it smack you in the face.

I first got hit by it in a Subway restaurant. But who cares? Subway sandwiches aren't traded across international borders anyways.

Then I had occasion to purchase something that does get traded internationally - coat hangers (don't ask).

They were easy enough to find and seeing as some want pictures here is what Venezuelan coat hangers look like: 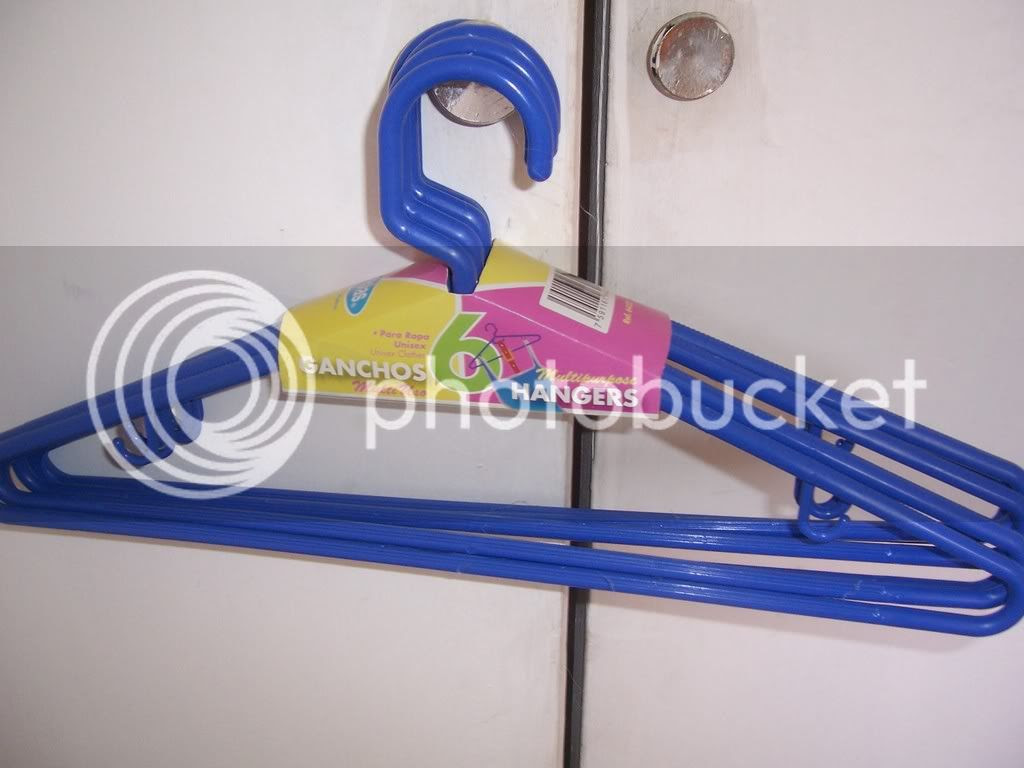 Not thinking about the Dutch Disease I innocently thought I'd buy these for a couple dollars - just like I would if I were in the U.S..

However upon reviewing the receipt from the grocery store where I bought them I discovered that they cost me over $10 dollars!!!! 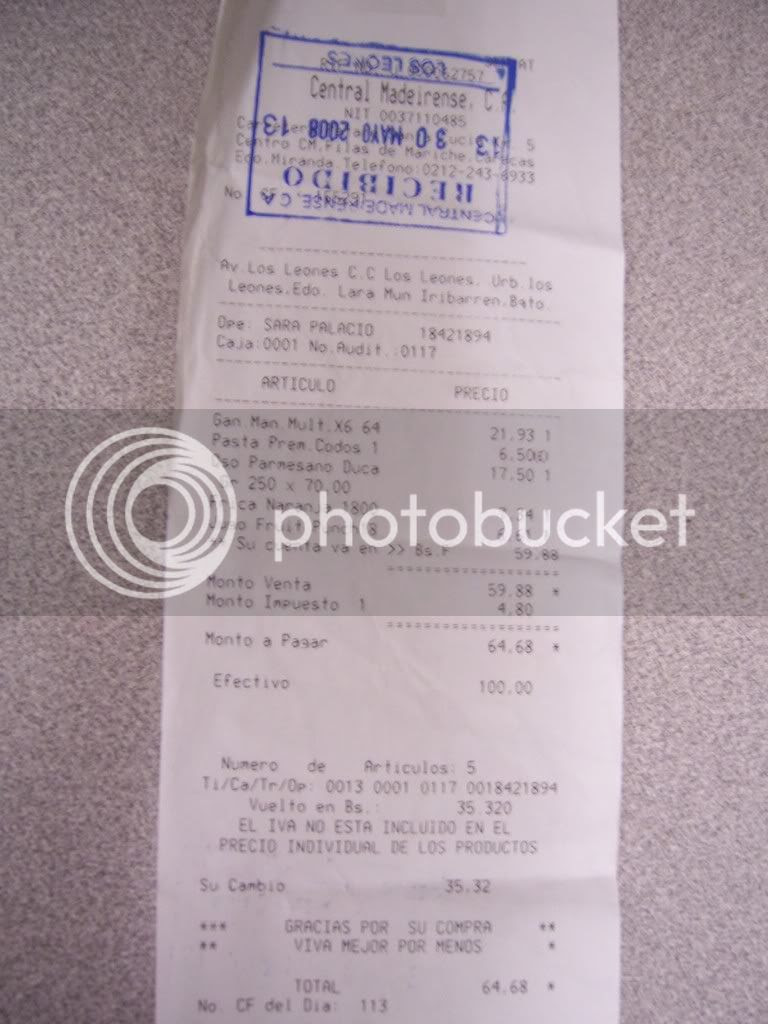 (btw, I normally don't review store receipts. But given how every time I bought something in Venezuela I felt like I had been mugged I began pouring over them).

Now here is the real kicker - the poor saps who make these things apparently had pretensions of exporting them at some point: 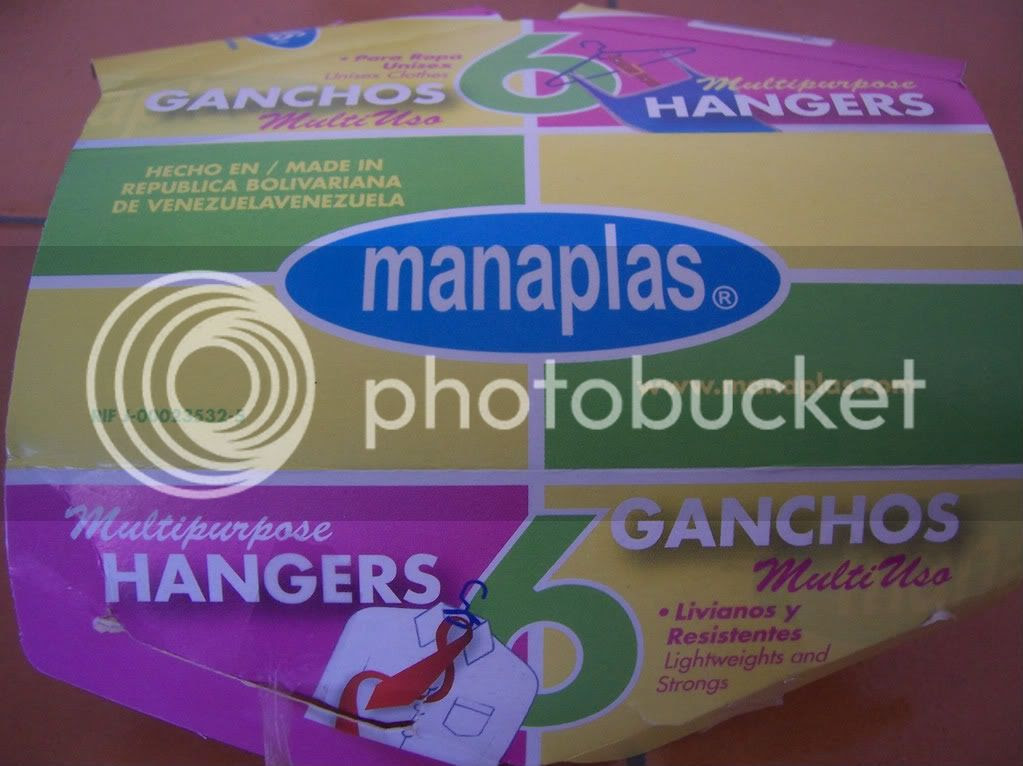 I highly doubt they made the label bi-lingual just in case some gringo in Venezuela stumbled upon them. Clearly they wanted to be able to sell them outside Venezuela.

Unfortunately, given that they are selling them for about 5 times what these things sell for in any other country there is a fat chance of that ever happening (of course, it would also help if they found people that actually spoke English to work on their labels). And given how absurd this price is I shudder to think what they might charge for a toaster.

Now for this price to be out of whack by 500% rather than just 200% shows there is something going on besides just the currency being overvalued. But that Venezuela can't even make a petroleum based product that is even half way price competitive just goes to show why no one buys squat from Venezuela besides oil, why they can't diversify their economy, and why Venezuela is likely to remain a poor country.
|
# posted by ow : 2:09 PM