There is one question I've seen posed by a number of people, both on this blog and on others, and by pro-Chavez as well as as anti-Chavez people. It goes something like this:

Why would an oil price of $40 or $50 per barrel now be a problem when that was the price only a few short years ago and the country was booming with that price? Why would $50 now be a bad before when so recently it was a good price?


This is a fair question but one that does have at least two very clear answers. The first is somewhat more subtle but the second is quite clear.

The first is that the driving force behind Venezuela's rapid economic growth in recent years is quite obvious. Up to now it has been increased government spending paid for by increasing oil revenues. That is, increased salaries for government employees, new social programs, new public works, new scholarships for students, etc, have all served to increase peoples purchasing power, spur consumption, local production and hence create that rapid growth we have seen.

That is all well and good but it all depends on one thing - ever increasing oil revenues to pay for ever increased government spending. Once those revenues stagnate, much less decline, the spending stops growing and so would the growth.

The only way stagnant oil prices wouldn't stop growth in its tracts is if other productive sectors of the economy, namely manufacturing, got legs of their own and could generate enough wealth to replace the declining oil wealth. Has that happened? We'll probably find out soon enough.

The second reason $50 oil is problematic now while it was a boon before is even more fundamental and it has to do with one of my main complaints against the government - the overvalued exchange rate. Or more specifically, the fact that the exchange rate has been fixed for four years now makes $50 oil worth a LOT less than it used to be.

Lets say a government worker was paid 10,000 bolivares in 2005. If oil sold for $50 barrel and with an exchange rate of $2.15 Bsf to the dollar each barrel brought the government 107BsF. It therefore took 93 barrels of oil to pay this employees salary. Ok that was 2005 and things were fine.

Now fast forward to 2008. What changed? Well lets assume the price of oil is $50 per barrel which it now is. That is the same as it was before. Also, the exchange rate remains the same: one dollar converts to 2.15 BsF now just as it did in 2005.

However, in the interim there has been large scale inflation. It has been around 25% per year so for sake of simplicity lets assume total inflation between then and now has been 75%. Accordingly government expenses have gone up by 75%. Almost certainly that government employee who earned 10,000 BsF in 2005 now earns 17,500 BsF (in reality it is likely more given that salaries have gone up in real terms).

Now remember, a barrel of oil brings in the same number of bolivares - after all the price of oil is $50, as it was, and it exchanges at 2.15BsF per dollar because the exchange rate is still the same. So each barrel of oil still brings in only 107 BsF in 2008 just as it would have in 2005.

That is, because the government has kept the exchange rate fixed $50 oil now brings in the exact number of Bolivares that $50 oil brought in in 2005. But that is woefully inadequate because all of the governments expenses in Bolivares have gone up tremendously due to inflation.

This shows the government has a fundamental problem created by its fixed exchange rate and high inflation. As its expenses go up in line with inflation it won't have enough money to cover those expenses unless the price of oil, in dollars, also goes way up each year. Fortunately for the government it has done just that over the past 4 years. It appears likely not only that that will not happen in 2009 but that it will actually drop. And as we have seen $50 oil doesn't bring the government as much money as it did in 2005.

Of course, oil isn't the only source of revenue for the government. It does collect regular taxes and those presumably would keep up with inflation. But at least half of government revenues do come from oil and with a fixed exchange rate that oil just isn't bringing the government as much money as it used to and as much as it needs.

This is why $50 oil is now very insufficient for the government while not that long ago it was a boon. Sooner or later something will have to give.
|
# posted by ow : 5:50 PM

It is not Urban vs Rural but wealth vs poverty

How can a country be 90% Urban and still have the rural party win almost everything? obviously if you live in lalaland you can divert the issue away from poverty but that is a losing strategy. It is still and will always be rich vs poor in Venezuela.

Here is a map of PPP GDP per capita per state. 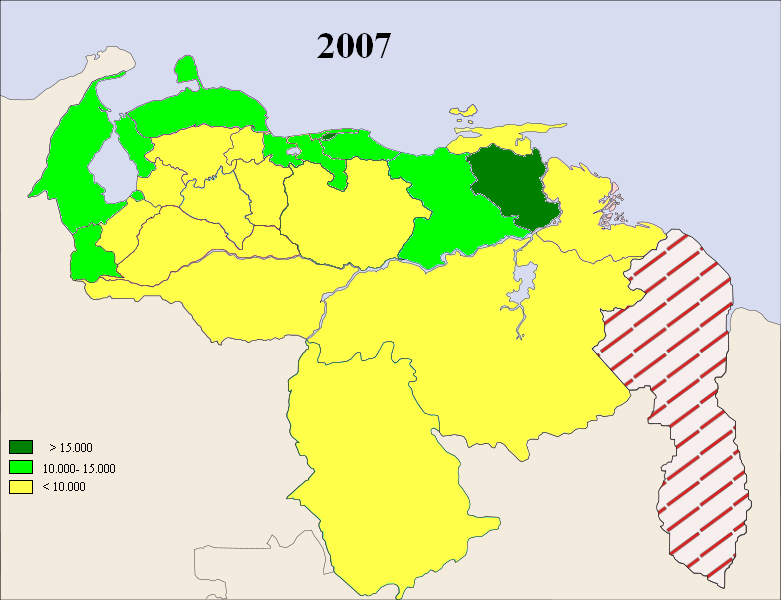 Source
Source of the Source

See the pattern? The richer the state the more likely they voted for the opposition. The only outliers are Monagas (oil wealth) and DC which is as urban as they come, but with not too many rich neighborhoods.
|
# posted by Flanker : 12:01 PM

Carabobo and Tachira are still undefined.

What is clear from all of this is that Chavez lost Caracas if he lost Mun. Sucre, and even though the opposition looks at it as if it were Petare only (naive since it ignores a lot of high class neighborhoods) it still is symbolic..