Generally weird statistics are always a head scratcher, you would never think that this government is business friendly, we hear horror stories of bureocracy run amok, threats of nationalizations, and worker invulnerability. 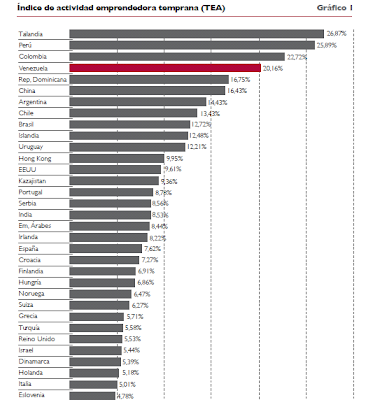 Basically what it means is that one in five Venezuelans (of the age group 18-64) is an entrepreneur of a nascent business, so when I first saw this statistic 3 years ago we were leading the pack and I thought that maybe it was an outlier, but evidently it is a trend. The left is not against entrepreneurs, we are just against purely financially driven and inegalitarian enterprise. Co-ops for example would be a positive development. (Chavez's version of socialism might as well be branded anti-consumerism since he now claims coops are capitalistic, but that is for another day).

Of course things are not entirely rosy either as they note in the pdf, the most important obstacle in Venezuela is lack of highly qualified employees, rather than the government. Also most new TEA's are created based on necessity rather than opportunity, the former are lower quality than the latter, and shows the real difference between developed countries and the rest.
|
# posted by Flanker : 4:05 PM

Siragon is the local computer (and electronics) brand, like Dell and HP their job has been to assemble the parts it imports but they updated their industrial capacity to hopefully make 1.5 million computers a year, they also entered the field of SMT's which goes to show how protectionism can nurture and expand local high tech industries, the next step would be making the actual chips eventually leading to R&D.

Like all things in Venezuela you need to shop around for good prices, Siragon's greatest flaw is the freedom its distributors have in gouging the customers.