You know money is tight when...

they start telling workers in the country's most important industry they won't get any raises this year.

That is just what PDVSA president Rafael Ramirez just did - he told all 75,000 PDVSA employees there will be no increases for them this year.

Now, that might not be such a big deal if it were a country with inflation of just a few percent. But Venezuela had inflation of over 30% last year and will likely have it be at least between 20% and 30% this year. Nice consumer goods (TVs, cell phones, cars, appliances, etc) are likely to go up in price way more than that and indeed some already have. So while oil workers in Venezuela are well paid, and in fact probably way over paid, they are definitely going to be taking a pretty big hair cut this year.

Given that most people in the oil industry inclined to oppose Chavez left in 2003 it is unlikely that this will lead to any seditious action.

Still, Chavez would probably do well to shut up about how Venezuela is "blindado" against the world wide recession. It is no such thing.
|
# posted by ow : 10:21 AM

MANPADS to the people

Little mentioned during the summit lovefest and the daily grind of news headlines, Venezuela acquired (it appears some time ago) a hundred or so IGLA-S. MANPADS are the greatest fear of an occupying power, but they are literally a weapon of last resort in a conventional war. (air defense should be handled by having air superiority, or at the very least SAM's of various ranges, if you are using MANPADS something went wrong). 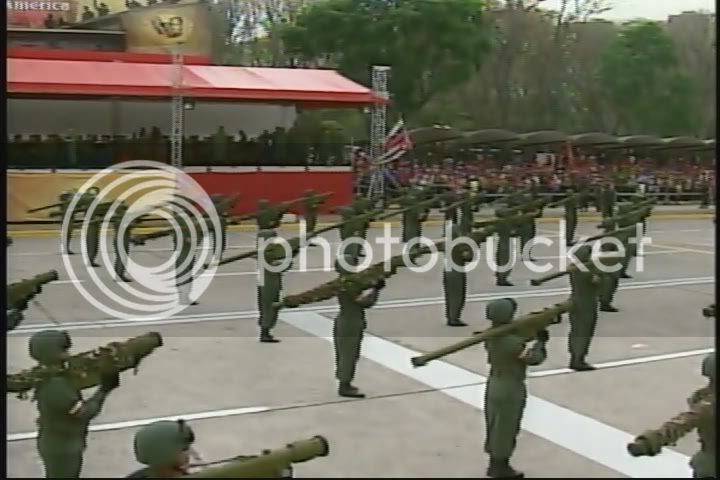 The US under Bush made it their mission to have these weapons destroyed, they claimed it was because they feared terrorists would get their hands on them, but this is always their lame excuse.
|
# posted by Flanker : 9:08 AM