Latin America has a problem...

It is about Latin America in general but also about what some have always held up as a model of Latin American "development" - Chile.

I've never understood why some have looked so favorably upon Chile - its GDP is still that of a third world country and the only things I know that it "makes" are things like copper, fish, and grapes. Not the stuff true development is made of. 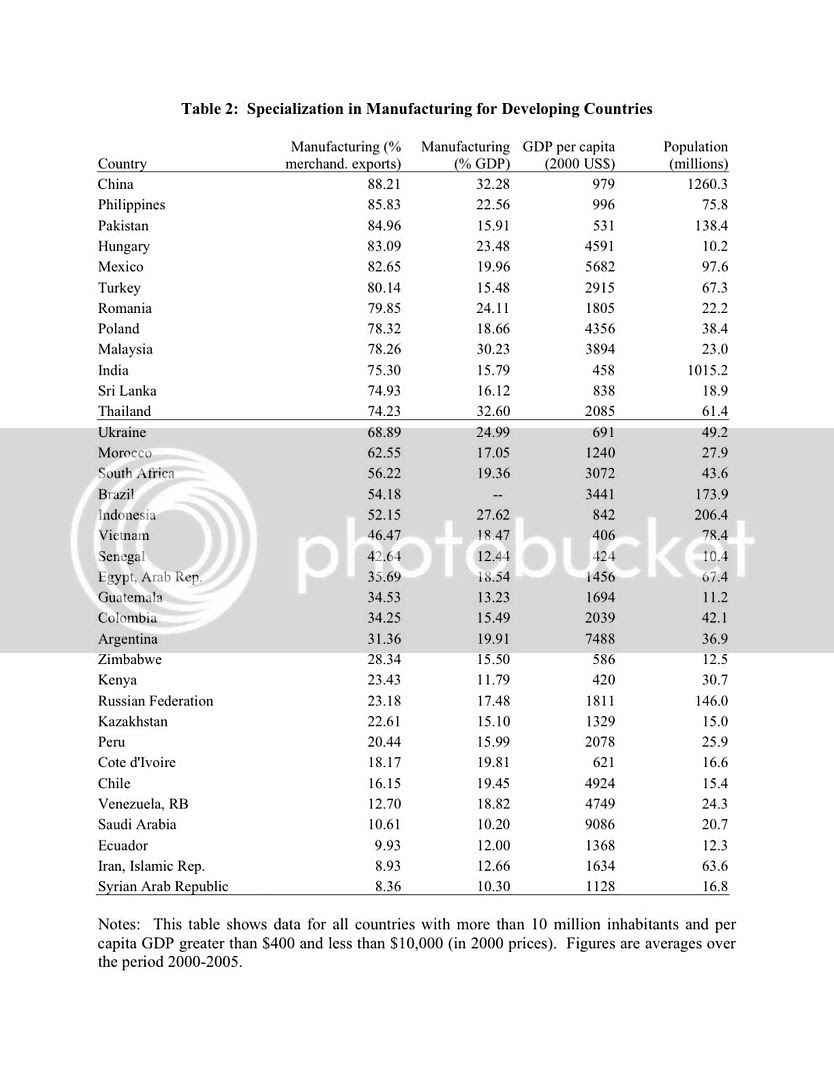 This is a list from an academic research paper showing how much the exports of many third world countries are made up of manufactured goods.

As you would expect, Venezuela is near the bottom. But, surprise, surprise, look who is right next to them - Chile!!!!!!

It's back to the drawing board I guess.

Anyways, looking at this table you can get a sense of what pathetic shape Latin America is in.
|
# posted by ow : 6:23 PM

Sugar highs are great, while they last.

It is amazing how good you can make yourself feel if you just eat enough Snickers bars.

It is also interesting how good you can make things feel in with your economy if you just borrow and spend enough.

Case and point, the United States of America.

Last fiscal year it ended with a 1.4 trillion dollar deficit. Yes, you read that right, defiicits in the U.S. are now measured in trillions - billions are passe.

If you think this is just a one off, think again. In the fiscal year that began on October 1st they expect to run a deficit of another 1.4 trillion. In fact, if you annualized the October 2009 deficit they could be pushing 2 trillion dollars before it is over.

But living in the U.S. it is hard to see what they did with that $1.4 trillion. During the New Deal they at least got lots of new schools, massive electrification via the Tennessee Valley Authority, Hoover, and Grand Coule dams, and new parks and roadways all over the country.

$1.4 trillion later we have... what? I know Wall Street types are back to getting tens of billions of dollars in bonuses but was that the purpose of all this spending (sadly, it probably was). No joke, there is no visible evidence of what that money went for.

You can spend tonnes of time on the governments web-site and you still can't figure it out. More and more, it looks like they just literally pissed it away.

Well, I am being a little unfair. There are SOME results from all this spending. The stock market is over 10,000 again. Oil is back up to high levels. Gold is well over a thousand dollars an ounce. And every other commodity is spiking again.

So they may not have built anything worthwhile with all this spending, but that have at least created a new commodity bubble. Gee, just what we needed, a new bubbles!!

So bad are the new bubbles even the Chinese are starting to freak out. And the very few credible economists that there are see it too. Regardless, the lemmings keep running and the U.S. keeps pissing away money.

Of course, the U.S. is not the only place on a sugar high. Venezuela is there too. So messed up is their economy, lacking virtually any real or productive investment, that they are having to borrow record amounts to fund their waste even though oil prices are at quite high levels.

Recently Venezuela has sold more than $11 billion in bonds... to what end?

Are their massive new public works taking place? Any much needed power plants being built? (and btw, the fact the country has a electric sector that can't meet the country's needs shows that the fools that think the Chavez government has a plan are just that, fools.) Are new industries springing up across the country?

It's not going to be fun in the Western Hemisphere when the sugar high wears off.
|
# posted by ow : 9:24 AM