John Lennon eat your heart out

I don't know about where you live, but where I live you can't turn on the radio without hearing John Lennon. Now, not that I don't enjoy his music, but once you've heard "Give Peace a Chance" for the 10,000 time (and just when the U.S. is planning to send 35,000 more troops to Iraq) it gets kind of old.

But here is something that made my Christmas - "PDVSA es Roja, Rojita" which for my money is the best song to come out at Christmas time in decades. And for you poor souls who don't speak Spanish - you need to learn it, if for no other reason than to fully enjoy this song!!!

So much for justice in Venezuela - NOT

Today the mayor of Baruta, a wealthy section of Caracas, Capriles Radonski, was found not guilty of participating in an attack against the Cuban embassy during the coup against Chavez in April 2002.

During the coup a mob formed outside the Cuban embassy and attacked it. They stormed the gates and when they couldn't fight their way in they proceeded to rip up water and power lines in attempt to force the people inside what should be a protected embassy into submission. During this mob attack the mayor of the locality where the embassy is located, Henrique Capriles Radonski, arrived on the scene and rather than using his police force to disperse the crow and protect the embassy, as under international law it should have been protected, he insisted on entering the embassy to "negotiate" with the Cuban personnel. What he would need to negotiate with the Cuban ambassador, as opposed to simply enforcing the law, is something of a mystery to me.

In any event, the coup ultimately failed and Capriles Radonski was later put on trial for having entered an embassy without authorization, among other things. The case turned into a he said, they said affair with Radonski insisting he had entered the embassy at the Cuban's request.

Of course, many of the facts of the case as well as the detials of the laws involved are things I don't know. It is possible that this verdict is correct. It is just interesting that in a country where there is supposedly no justice an opposition mayor with a seemingly strong case against him managed to beat the rap.
|
# posted by ow : 4:44 PM

Venezuela may be "revolutionary", but it is still Venezuela

A couple of times in the past the issue of abortion has come up on this blog. Once because a pro-Chavez deputy pro-posed legalizing it in certain limited cases as it is currently illegal in almost all circumstances.

That is not about to change anytime soon. Chavez may have won an overwhelming victory but as can be seen from this thread on the Aporrea forums Chavistas themselves are overwhelmingly opposed to it.

They don't like it, but they have to admit it

The thumping Chavez gave to the Venezuelan opposition last week was such that even the stridently anti-Chavez Economist couldn't avoid the reality of the situation:

A sweeping triumph for the Bolivarian revolution


IT WAS an unequivocal electoral endorsement of Hugo Chávez and his Bolivarian revolution. In a presidential election on December 3rd, Mr Chávez won 63% of the vote to 37% for his opponent, Manuel Rosales. That was more than the 56% Mr Chávez won when he was first elected president in 1998, and gives him another six years in power. He will use them, he said, to “deepen and extend the revolution,” whose aim is “21st century socialism.”

The Hugomobile runs and runs on Bolivarian gasHis plans include the unification of his supporters in a single revolutionary party and a reform of the 1999 constitution. Although of his own making, this was adequate only for what he now calls the “transition” period. One of the changes he wants is to remove all term limits for presidential re-election.

Mr Chávez's popularity owes much to the massive increase in Venezuela's oil revenues over the past three years. He has said that he does not plan “drastic changes” to his government's social and economic policies. But at his post-election press conference, Mr Chávez, a former army officer and coup leader, reiterated his belief that democracy was impossible under capitalism. He also praised pre-Columbian systems of barter and collective property-ownership.

Private enterprise may face more restrictions. Over the past few years, the government has imposed controls on prices, access to foreign exchange and the allocation of bank credit. Government-subsidised co-operatives and “social production companies”, together with state-owned enterprises, are likely to account for a growing slice of the economy.

Mr Rosales, a social democrat, barely hung on to the 4m anti-Chávez votes cast in a mid-term recall referendum on the president held in 2004. His proposals, including an innovative debit card for the direct distribution of oil income to the poor, seem to have had little impact among wavering chavistas. He trailed the president in all 24 states, including his home base of Zulia. But his energetic campaign, swift admission of defeat, and his determination to keep his broad coalition in being all hold out hope for the opposition.

Mr Rosales unveiled his own proposals for constitutional reform, including a reduction in the presidential term to four years, and tighter guarantees of property rights and educational choice. Education could be an early battleground, as it has been on and off since the country first became politically polarised between supporters and opponents of the president in 2001. The government believes that education should be politicised: it wants to inculcate “Bolivarian” values (for Simón Bolívar, the Venezuelan-born Latin American independence hero who is Mr Chávez's ostensible inspiration).

Mr Rosales quashed moves by radical anti-Chávez groups to take to the streets alleging a non-existent fraud. This will enhance his reputation as a straight-talker and decisive leader, both at home and abroad. His stance increases the legitimacy of the opposition, damaged by a failed coup attempt against Mr Chávez in 2002.

The president's power looks limitless. Because the opposition chose to boycott a legislative election last year, it has no representatives in the National Assembly. The government controls the judiciary and all the other institutions of state.

Nevertheless, the president now faces a choice. The evidence is that most Venezuelans like Mr Chávez and his social programmes, but do not want Cuban-style communism. If the president chooses to use his new mandate to steer his revolution in a more authoritarian and collectivist direction, he is likely to face growing dissent, even within the ranks of his own supporters. If he chooses to try to start a dialogue with a more constructive opposition, he could remove the stigma attached to the undemocratic aspects of his rule. But Mr Chávez is not a man given to compromise. The most the opposition might achieve is to retard his progress.

That last sentence is rather funny. What the opposition has spent the past eight years doing is trying to "retard" Chavez's and Venezuela's progress - through coups, oil strikes, and other attempts to destabilize the country. Doesn't seem to have worked, does it? I doubt they will be any more succesfull with it in the future than they have been in the past.

But that is not all, The Economist then published the results from a poll conducted throughout all of Latin America. And the results sure looked pretty good for Venezuela.

For starters Venezuelans are second only to people in Uruguay with how democracy works in their country.

Not only that but note how much their satisfaction has moved up since 1996 when the opposition was running the country. Only Mexico rivals them in improvement. I guess people are happy to get rid of those two party "Punto Fijo" type regimes.

Another graph shows that Venezuelans have a much more favorable opinion of "democracy" than most other Latin Americans and are also more likely to reject ever having undemocratic type governments.

Once again note how their positive perception of democracy has GROWN during Chavez's time in office. It would appear the more people get a taste of what REAL democracy can offer the more they like it!
|
# posted by ow : 4:44 PM

A luxury and dignity high denied so many others

Former Chilean dictator Augusto Pinochet died today of natural causes. Although human life is precious and I am generally not in favor of taking it, it certainly is ironic that this individual who denied life and liberty to so many others had his to the end. Such are the injustices of life I suppose.

It is also ironic that the Cuban dictator, Fidel Castro, is apparently at deaths door right now too. Wouldn't it be ironic if those two brutal dictators died at the same time. I'm not religious, so I don't believe in there being a hell. But it would be kind of cool if there was one so that those two murderers could be stuck there together. They deserve each other.
|
# posted by ow : 12:19 PM

Out front, and pulling away

Chavez has now faced the Venezuelan electorate four times. Each time he has emerged victorious, which is quite a record. But that is not even the most impressive part of this. What is even more amazing is that his vote total has gone up each time, and the amount by which his votes exceed his rivals has tripled. Courtesy OkrimOpina we get the hard numbers: 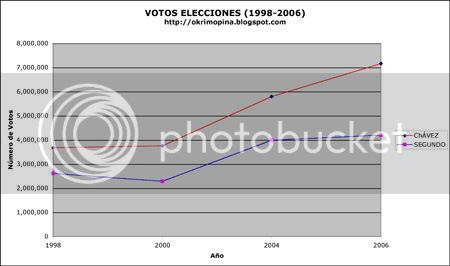 This first graph shows the relatively small margin he won his initial victory by. Then he was elected again when all offices had to be re-ligitimized after the new constitution was written. But by 2004 when he faced a recall referendum his support had grown dramitically and by the time of this past Sunday's vote it increased still more.

Of course, the oppositions numbers have increased some too, but by a much smaller margin. This becomes apparent looking at this chart which shows Chavez's margin of victory which was initially one million votes and has now increased to three million votes. 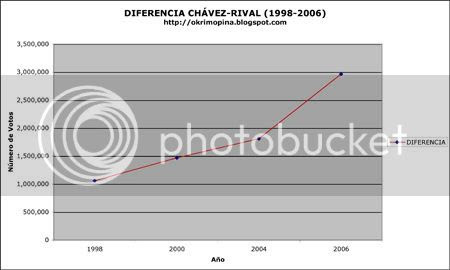 Clearly, the more Venezuelans get to see of Chavez, the more they like him. And when you look at all his accomplishments over the past eight years, who can blame them?
|
# posted by ow : 9:04 AM