More on the coup

This interesting video shows Carmona swearing himself as President during the April 2002 coup. It also shows the beginning of the signing of the decrees abolishing the old government. Much of this vermin still walks freely around Venezuela - in fact one person filmed hear signing the decree and embracing Carmona just ran for President! So much for repression in Venezuela!

Readers will recall that the U.S. oil company Citgo is a wholely owned subsidiary of the Venezuelan state oil company, PDVSA. Although it was purchased in the late 80's early 1990's it had, up until Chavez coming to power, never paid any dividends to Venezuela or repatriated any of its profits. Purchasing Citgo was really a scheme for the old PDVSA management to keep profits and assets overseas and outside the reach of the Venezuelan government. This showed the extent to which PDVSA, although nominally state owned, had become an independant actor that pursued its own interests (for more on this please refer back to this EXCELLENT article on how PDVSA was run by Bennard Mommer).

In 1999, under Chavez's orders, Citgo finally began sending its profits back to Venezuela. And with Venezuela's policies of supporting OPEC and boosting prices those profits have been steadily climbing. For 2006 it looks like Citgo will repatriate a record $800 million dollars in profits, or about enough to build a new subway line in Caracas. That is on top of the over $1 billion got for selling an unneeded Citgo refinery and is an increase from the $750 million repatriated in 2005.

So the next time you hear an opposition friend bitch about Citgo giving discounted heating oil to poor Americans you might want to remind him/her that under Chavez Citgo pays hundreds of millions of dollars in profits to Venezuela, which is hundreds of millions of dollars more than it ever paid when they were running it. Whereas before Citgo was run only for the benefit of the privaledged oil executives now it is run to the benefit of Venezuela's poor and the U.S's poor. Sounds like a vast improvement to me.
|
# posted by ow : 10:32 AM

Taking it to the next level

I guess regular trains are getting a little boring for the Venezuelan government. So now they are taking it to the next level and proposing to build a maglev train to connect Caracas to the coast. Where they would build this and how much it would cost is anyones guess but it does look interesting. Don't expect to ride this thing anytime soon. 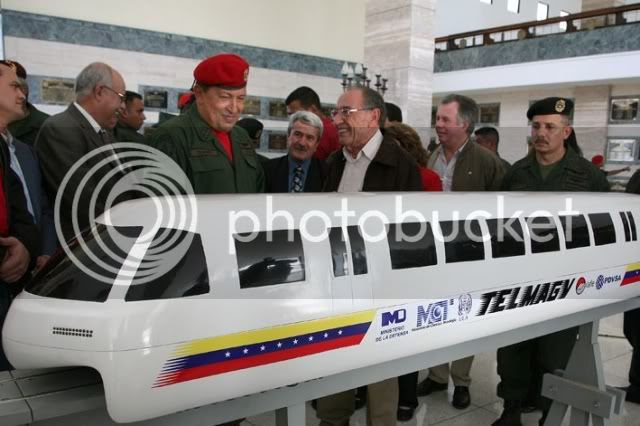 Yesterday President Chavez announced that one of the main right wing TV stations in Venezuela, RCTV, will likely lose its broadcast license when it comes up for renewal in 2007. The stations owner Marcel Granier, has never made any bones about his desire to remove Chavez from power by any means necessary. Thus RCTV has been constantly used as a weapon against the government. During the Recall Referendum it illegally refused to run pro-Chavez advertisements. And it was an active participant in the April 2002 coup against Chavez. In fact, Mr. Granier even made his way into this video of the coup shown by Carlchuchovision which will hopefully be RCTV's replacement:

Christmas in Caracas was indeed red this year. But not red as in the "roja, rojita" kind made famous by its oil minister.

Rather it is the red of blood. On Christmas eve (when Venezuelans actually celebrate Christmas) 60 people were murdered in greater Caracas (34 in Caracas, 15 in Valles del Tuy, 4 in Vargas, 4 in Guarensa-Guartire and 3 in Altos Mirandinos).

How long this blood bath is going to be allowed to keep going is anyones guess. A little while ago Chavez got upset with Jessie Chacon, Venezuela's top crime fighter, for some problems with protocal at a diplomatic event. Too bad he doesn't seem to get as upset at the guy not doing his real job, fighting crime.
|
# posted by ow : 7:07 PM