Lets get to the real problem

To listen to some people one would think there is a crisis with regard to food in Venezuela. Prices are up, food is scarce, store shelves are empty... Venezuela must be on the verge of becoming the next Ethiopia or Bangladesh, or so they say. Some silly bloggers make fancy Power Point presentations purporting to show how meat processesing businesses just can't make ends meet (no pun intended) in Venezuela (Interestingly, in a post whose veracity hinges on the actual numbers they use numbers they just picked out of the air - and some wonder why they got rid of their comment section!).

Of course, where the opposition sees nothing but dark clouds the reality is the sky is quite blue. Today the Venezuelan Food Industry Chamber pointed out that consumption of food actually ROSE in Venezuela 9.2% last year. That is right, all the non-sense about "shortages" notwithstanding, Venezuelans are eating a lot more food these days. So much for THAT crises.

Well actually there is a crisis. Just not the one the opposition talks about. The REAL crisis is that with food consumption way up and automobiles selling like never before Venezuelans are rapidly turning into overfed, under-exercised pre-diabetic flabby blobs just like the people in the good old U.S.A. It is hard not to notice this when traveling around Venezuela.

In Barquisimeto not that long ago I was talking to a bus driver. He stated that 6 or 7 years ago his bus comfortably held 50 people. Now only about 40 of the little piglets Venezuelans have become can actually be squeezed onto the bus he said. Pretty compelling evidence, I think.

Worse still, Venezuelan womenhood, once famed for its anorexic bueaty, is being destroyed. In the old days Venzeuelan women won international competitions with regularity. Can it be a mere coincidence that since Chavez came to power and started boosting car sales and food consumption no Venezuelan has won a Miss Universe title? I think not.

Rumor has it red meat and sugar is being hoarded by some. I know maybe I'm not supposed to admit this, but I'm rooting for the hoarders. Thank god there are some brave people out their willing to do what they can do put an end to the compulsive overeating by Venezuelans!!
|
# posted by ow : 2:37 PM

You be the judge

The last couple of days the Venezuelan opposition has been squealing about the fact that the government has decided to fine the all anti-Chavez all the time newspaper, Tal Cual,and its editor, Teodoro Petkoff, for an editorial that it published last year.

The fine is because the saracastic article pretended to adress Chavez's young daughter who Chavez had brought up on his TV show, Alo Presidente, in the context of changing the national shield. The Tal Cual article made a bunch of joking requests of the little girl under the premise that she is the only one Chavez listens to. Or court decided this violated laws protecting the privacy of children and issued a fine.

Having been fined a few thousand dollars this newspaper is now screaming repression (even though they attack Chavez in the most vile terms day in and day out - portraying him as Hitler just the other day for example). Now some of the opposition have even taken to asking others to contribute money to help pay the fines! Or more likely, help pay for this advertisement in today's Ultimas Noticias where they reprint the original article and ask the reader to decide if it deserved being fined: 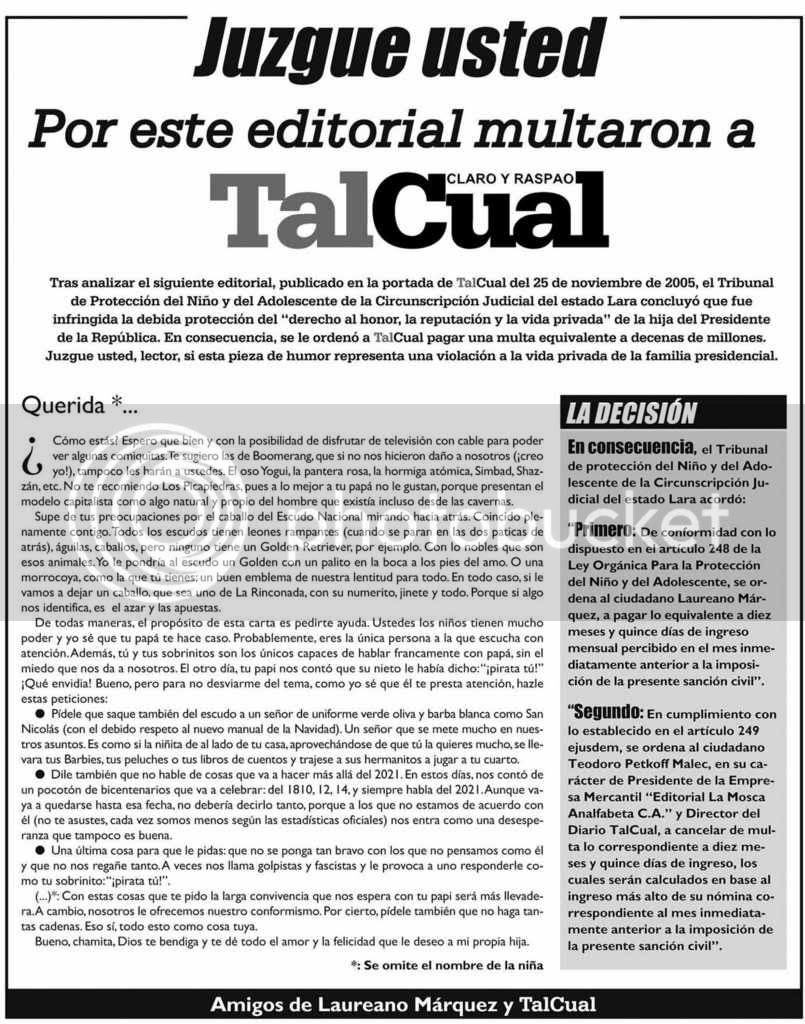 Reading this article, it is hard to decide. This article is typical of the arrogance of Tal Cual. Can you imagine any paper in the U.S. adressing Bush's daughters in this fashion? Not likely. Further it is full of the usual opposition clap-trap. For example, it says at one point that we know there are fewer and fewer opposition supporters because "government statistics" say so. Ahh, not really. I think we know it because their precentage of the vote keeps going down in succesive elections.

Does this merrit a fine? Probably not in my book. Then again, I didn't think the CBS should have been fined over Janet Jacksons wardwrobe malfunction. Nor did I think Judith Miller should have spent weeks in prison just for refusing to give up sources. [Of course, Tal Cual and Petkoff probably should be fined big time for saying that the sniper on April 11, 2002 were controlled by Carcas mayor Freddy Bernal, something they've never presented evidence on.]

Still, I'm sure Tal Cual will be able to muddle through, pay the fine, and go about their way, writing their daily drivel. After all, they're rich. Not quite sure how, but Petkoff, a former guerilla, then a congressmen, and later a government minister somehow got enough money to buy a newspaper. Now, maybe that is something someone should look into in the interest of combating corruption.
|
# posted by ow : 2:09 PM

Plenty to keep them busy

With the enabling law that the Venezuelan National Assembly has given Chavez the opposition has tried to argue that the legislature has given all its power to Chavez and that they will be completely irrelevant for the next 18 months. As most things that the opposition says, this turns about to not be even close to being true. 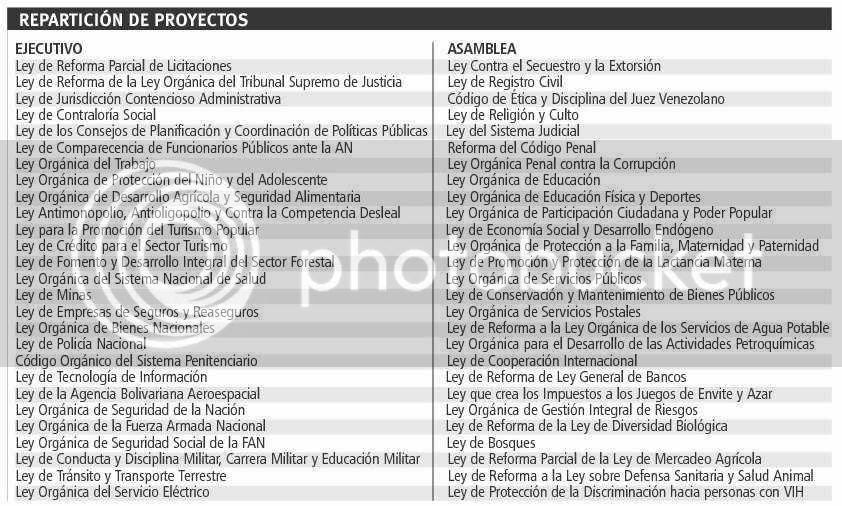 Lets take a look at some of the things the Assembly will be handling.

First, they will be responsible for revising the Penal Code - that is the basic law that determines what the criminal laws are in Venezuela and what the punishments are for breaking them. It is this Penal Law that famously has some absurd laws like the ones making it a criminal offense to "offend" the president, another making it a crime to bang on pots and pans (a form of political protest in Venezuela), and another making it a grave crime for a wive to commit adultery (but not a husband). These laws were all written decades ago and Venezuela has spent its entire democratic era living under them but hopefully the National Assembly will see fit to get rid of them.

They will also be responsible for revising the laws on education, corruption, the civil registry, laws on environmental protection, and one on discrimination against people with HIV. This should be more than enough to keep them busy - in addition to other more mundane things like approving the budget.

Chavez will have his hands full with revising labor law, laws regulating the armed forces, laws on tourism (wow, he really must be a dictator to want to change laws on tourism by decree!!!), and laws on the national police and prison system, among others.

There is a lot of work to be done so the government is doing a very logical thing - dividing it up and hopefuly accomplishing twice as much as they would if both branches had to work on the same projects.

Also, it should not be overlooked the very first laws put into effect by Chavez with his new decree powers were the ones eliminating the value added tax on numerous food items. I'm sure opposition supporters who are outraged by this upsurping of power that should reside with the legislature will ingnore this illegitimate law promulgated by Chavez and insist storekeepers keep charging them the tax!!
|
# posted by ow : 5:24 PM

Debt down in Venezuela

Here is an interesting graph from Ultimas Noticias on Venezuela's public debt: 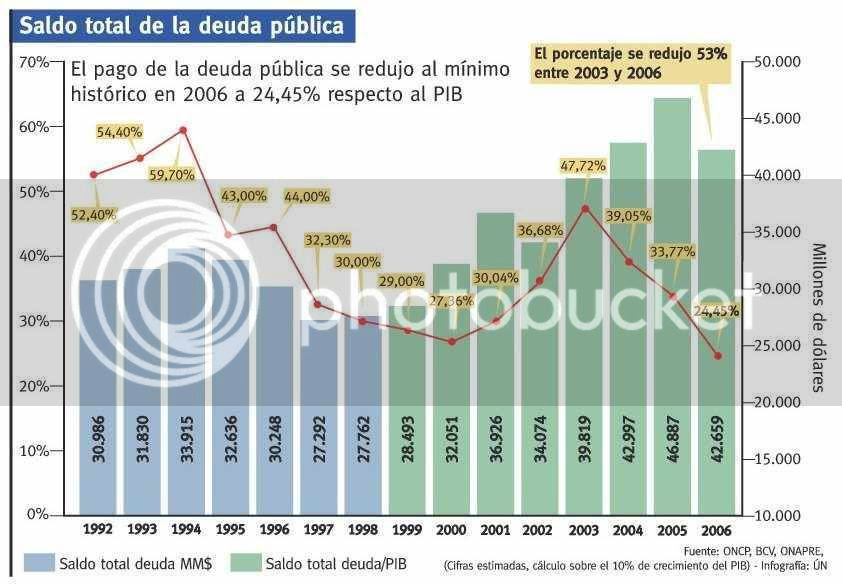 The bars on the bottom give Venezuela's total debt, both foriegn and domestic, in billions of dollars. The line with percentages on it indicates what percentage of GDP that debt is equivalent to. For example, in 1998 the country's debt was equal to 30% of GDP. Now, it has declined to 24.45% of GDP. That means Venezuela's debt is lower than at any time in recent history and lower than when Chavez came to office.

Also, this chart actually understates the good news. First, it leaves out the debt of the State oil company PDVSA which was about $7 billion when Chavez first came to office and has now been almost fully paid off. Secondly, much more of the current debt is domestic debt held in Bolivares. The significance of that is that given that much of the governments income is in dollars, from oil sales, once the Bolivar is devalued this debt will at the stroke of a pen be significantly reduced and easier for the government to pay down.

A booming economy, increased production, higher saving rates, more jobs, increased real incomes and consumption, and reduced debt. Given how well the economy is doing Chavez probably wishes there was another election right now so he could kick the oppositions tail yet again!
|
# posted by ow : 5:28 PM