All you can eat

One of the constant opposition propoganda points for months now has been about supposed food shortages. Of course, it turns out those supposed "shortages" are really not much more than a huge increase in food consumption as has been amply documented in this blog.

Yet in Caracas one can go into any restaraunt and ask for any type of food, be it beef, chicken, an omlette or whatever, and have no problem getting it. Apparently these "shortages" are not affecting restaraunts.

And in doing some grocery shopping it would appear they aren´t affecting supermarkets much either. Just for fun I visited one in a fairly middle class area, Las Acacias. What I found was something that wouldn`t look any different if it were in most cities in the U.S: 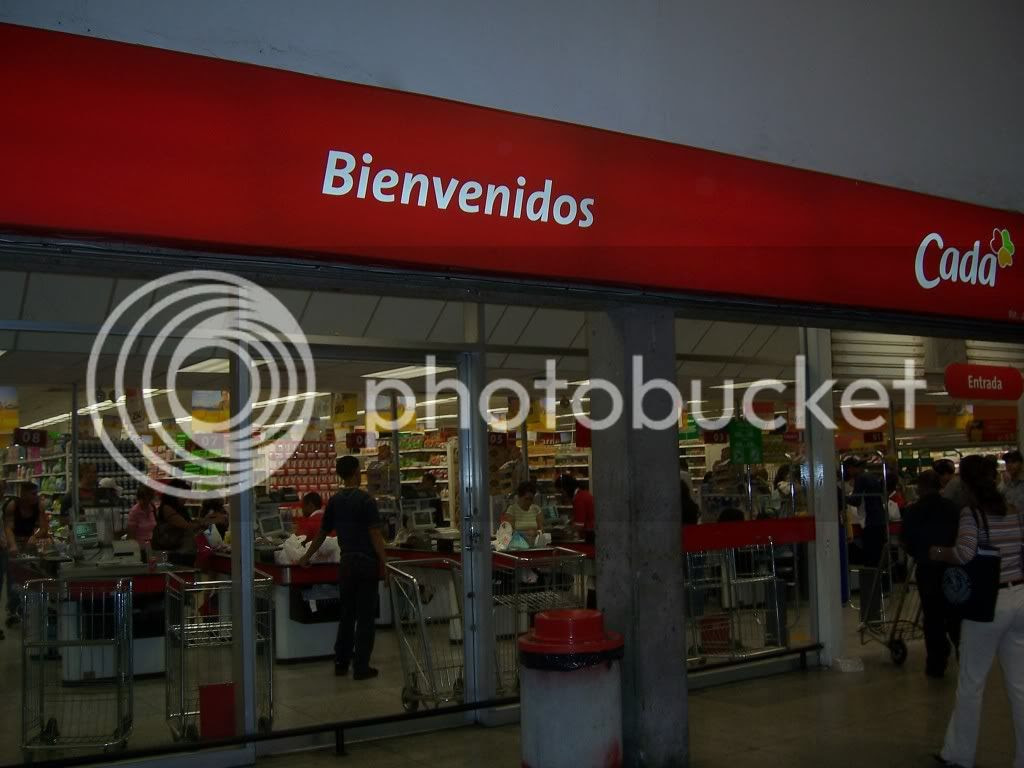 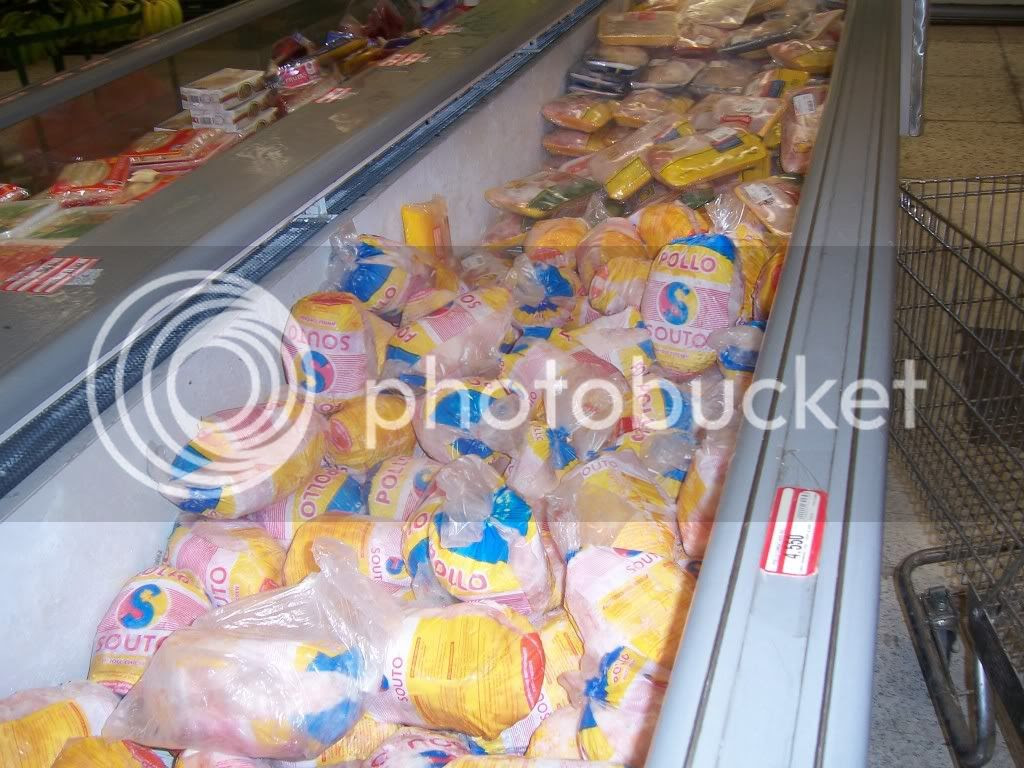 Plenty of cold cuts and cheese 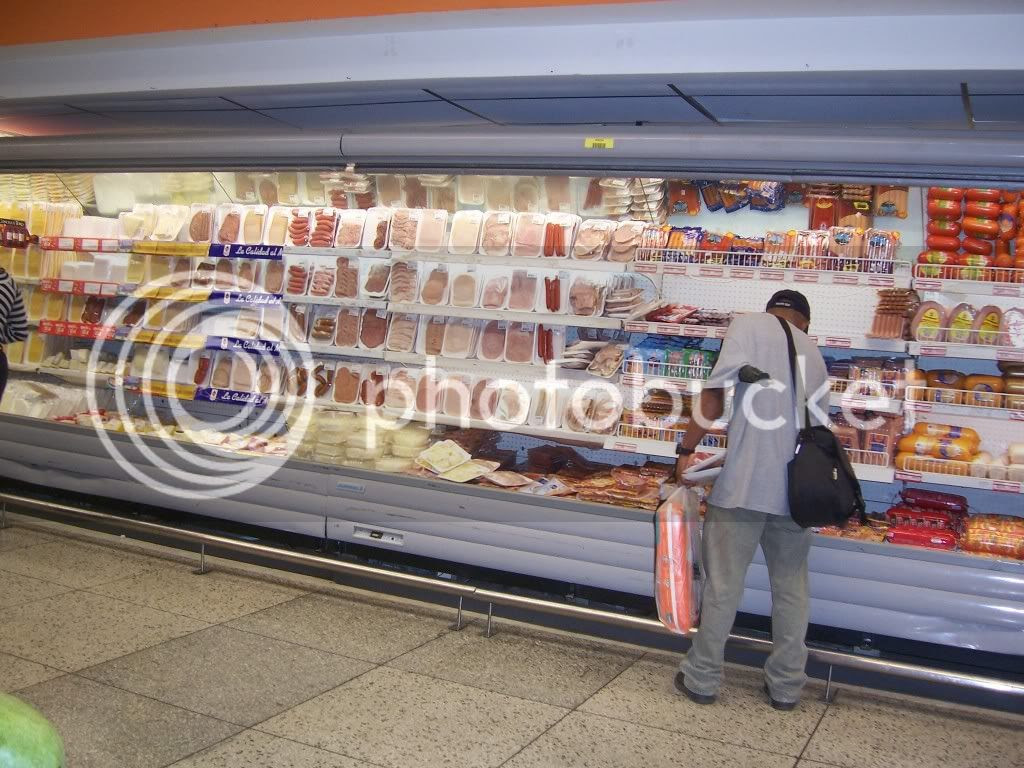 Plenty of veggies and fruit 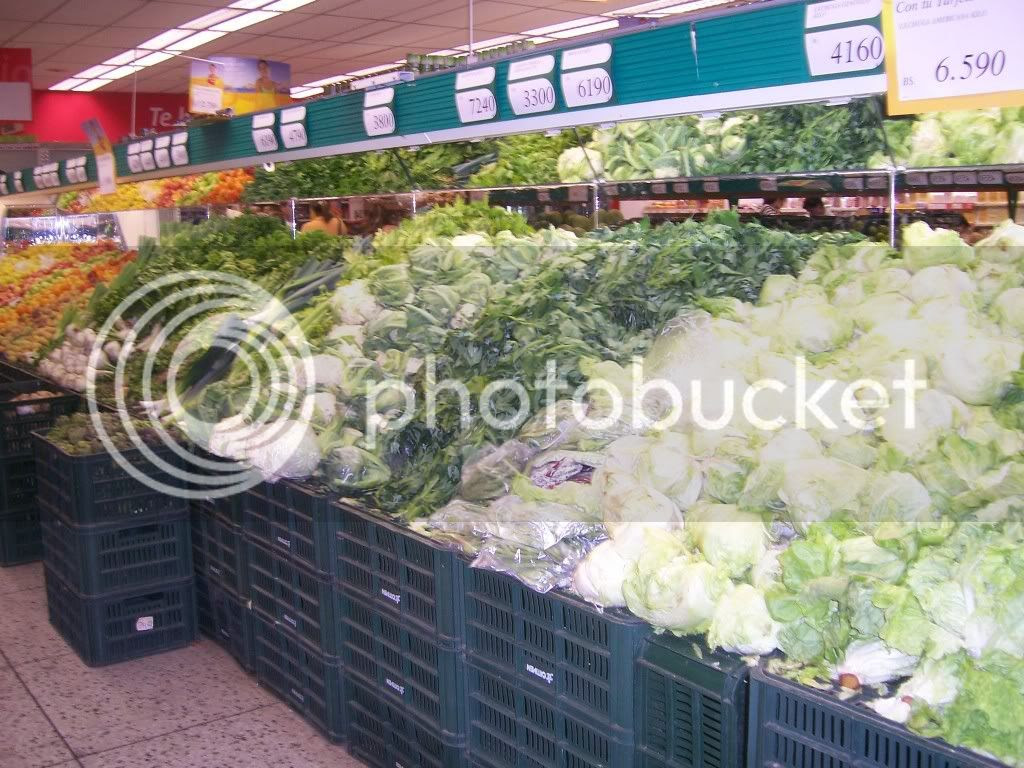 ok, here is the "shortage" 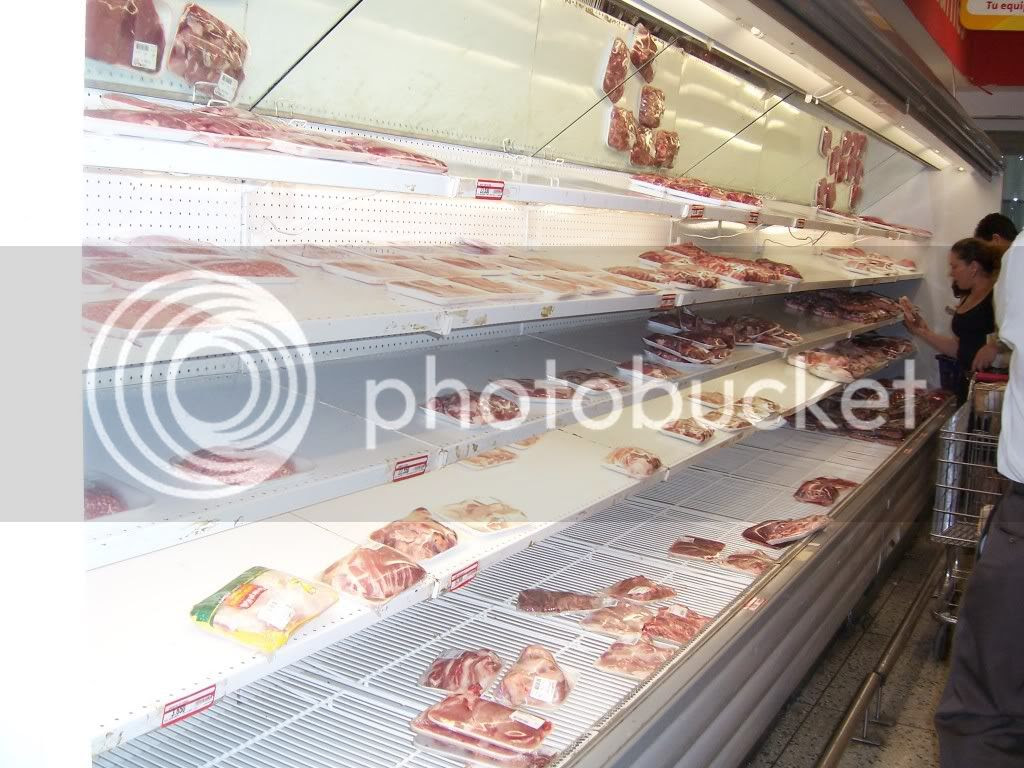 The beef section was pretty skimpy - though not non-existant. Must be those pesky "E" people hogging it all up.

And oh yeah, the Special K did seem to be running low too 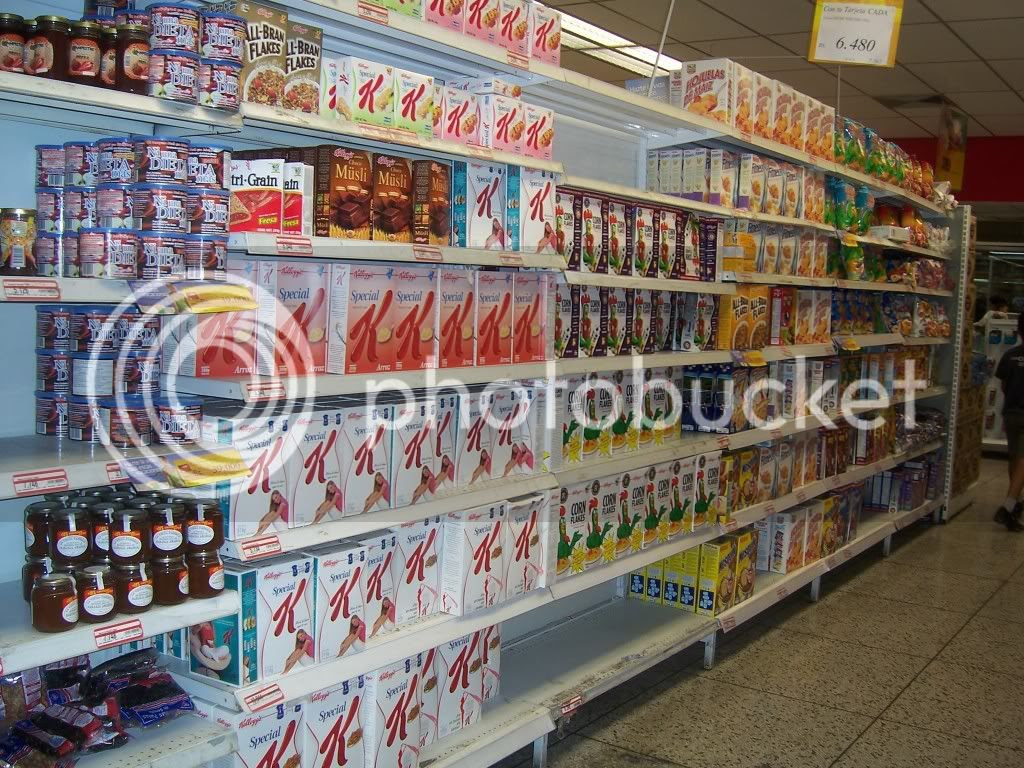 Like Mark Twains death, these food shortages would appear to be greatly exagerated.
|
# posted by ow : 5:04 PM

Frequent readers of this blog will have seen this slide a few times by now: 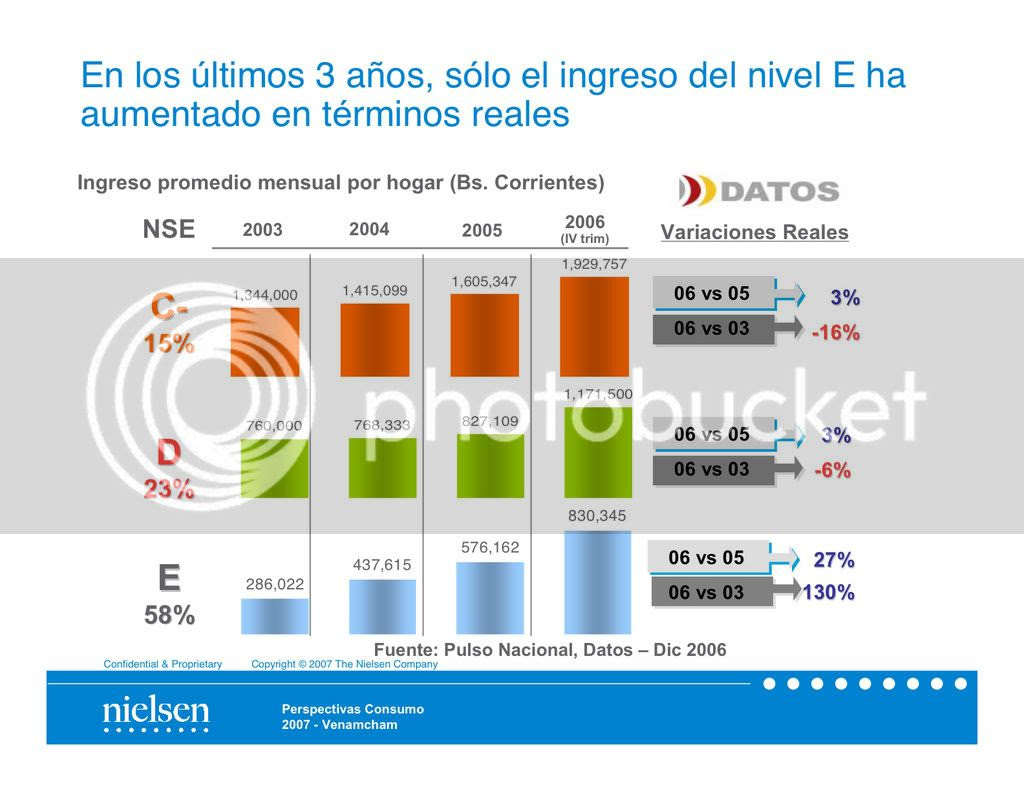 This chart, from the private firms of AC Nielsen and Datos, shows how Chavez has raised the REAL income of the lowest half of the Venezuelan population by 130% over the past few years. And I have shown it frequently because it is truly an amazing accomplishment for it shows that not just has Venezuela boomed but that because of the deliberate and well thought out policies of the Chavez administration it is the poorest Venezuelans who have benefited the most from this boom. That sure is very unlike some countries to the north where economic growth has disproportionatly benefited the already wealthy.

Now if you are like me there is probably a thought that passes through your mind as you look at this chart. And that is, if social class E is seeing its income more than double wouldn't some of the 58% of the population that is in social class E stop being in that class and move up a rung or two on the social scale to say D or C+ (if you forgot the definitions of these classes see here)?

Well sure enough, that movement has started to happen. Witness this chart from yet another VenAmCham presentation: 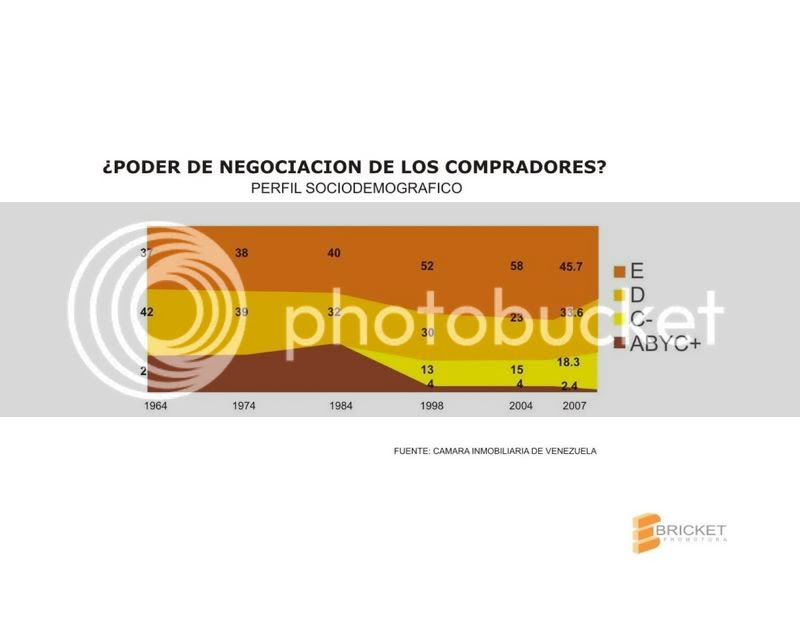 Remember, social class A is the wealthiest and it works its way down to social class E which is the poorest. Keeping that in mind what do we see? Well, social class E had been growing steadily from the 1970s through the beginning of Chavez's term. That is the bulk of the Venezuelan people had been getting poorer for at least the last three decades - and this is reflected in the steady growth of social class E. Immediately before Chavez came to office in 1998 social class E was 52% of the population. Finally Chavez has reversed the three decade trend and social class E has now dropped to 45.7% of the population - as people move up to higher income classes!! This is absolutely fantastic news for Venezuela and should help explain why Chavez is the most popular president Venezuela has had since... who knows when.

Of course, Chavez does have his detractors, and looking at this chart we can see why. Note that the upper classes, A, B and C+ have fallen under Chavez from 4% of the population to 2.6% of the population. That is, many of the formerly affluent have now been reduced to mere middle class. I guess that could explain why some of them now like go out and throw rocks at the police. Being just middle class has just got to suck for those hyper status conscious types from eastern Caracas.

Of course, social classes D and C-, the working class and middle class, have grown from 43% of Venezuelan society before Chavez came to office to almost 52% now. Leave it to Chavez to rebuild the bulkward of a stable and prosperous society - the middle class.

Of course there is much to be done. But Chavez has taken a huge ship headed in the wrong direction at high speed for many decades now and through hard work and intelligent policy making has turned it 180 degrees and now has it moving firmly in the right direction.