Almost as good as the good old days

Seeing as Haloscan is sending me e-mails about the comments section burning up their servers I've decided its time to put some people to sleep with lots of numbers.

Fortunately there was a presentation on Venezuela's economy the other day so we now have plenty of new numbers to look at. 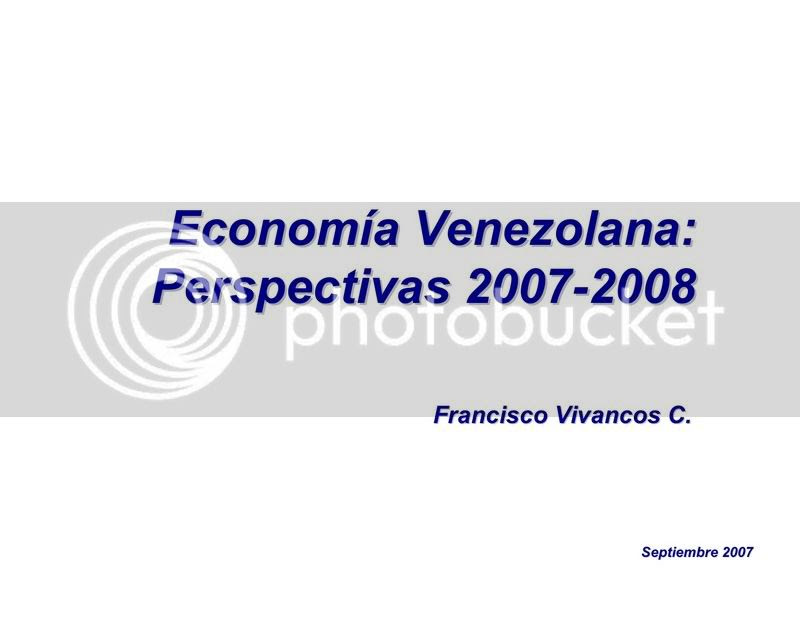 The first number loaded slide is on the government revenues and expenditures: 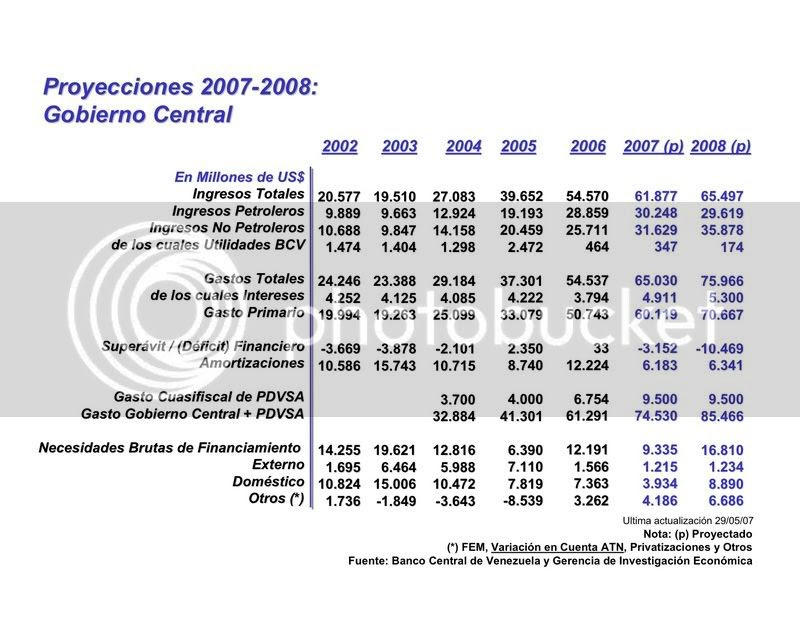 One interesting thing is at least the creators of this presentation understand how to read budgets. Note half way down they have a column indicating if the government is running a surplus or deficit. Although opposition propogandists and gullible foriegn journalists have often asserted that Venezuela is running a fiscal deficit it has in fact run surpluses the past two years. This Clintonesque fiscal prudence is I'm sure the envy of our North American readers.

BTW, also note what the total revenues are of the Venezuelan government. The opposition propogandists have often erroneously asserted that the Venezuelan government has had up to $400 or $500 billion in revenue and then go on to ask rhetorically what could have happened to all that money. Looking at the chart we can see that only now are they up to $50 billion in revenue per year and in prior years they generally had between $20 and $30 billion in revenue. Take an average of $35 billion per year, multiply by 8 years and, well, you can do the math and see it won't come to $500 billion - not even close.

By the way, here is a chart that makes in interesting point on government spending: 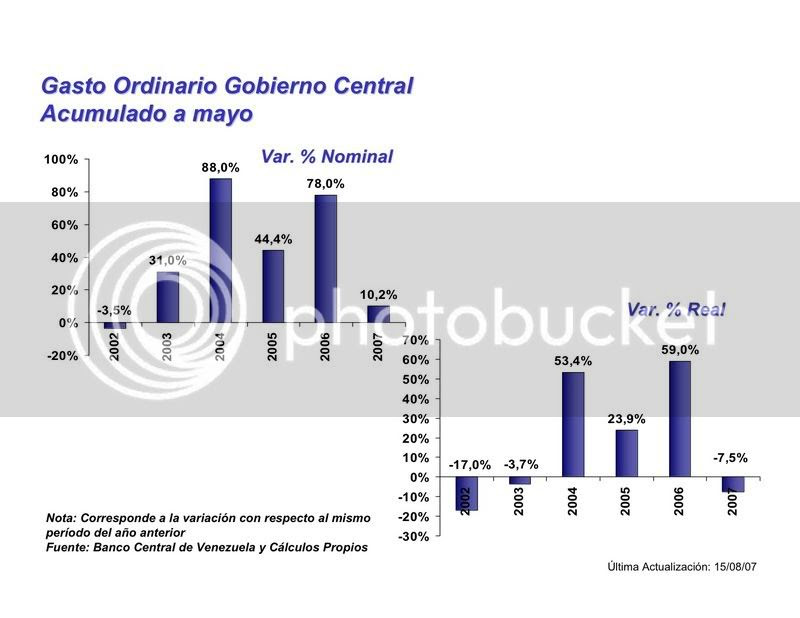 That is not unexpected. Economies often need the the government to jump start them. But once on their way they have a momentum of their own, like a big ship, and will continue moving foward even after the original fiscal impetus is taken away. This is precisely what is happening in Venezuela.

Next, we can look at some numbers on foriegn trade: 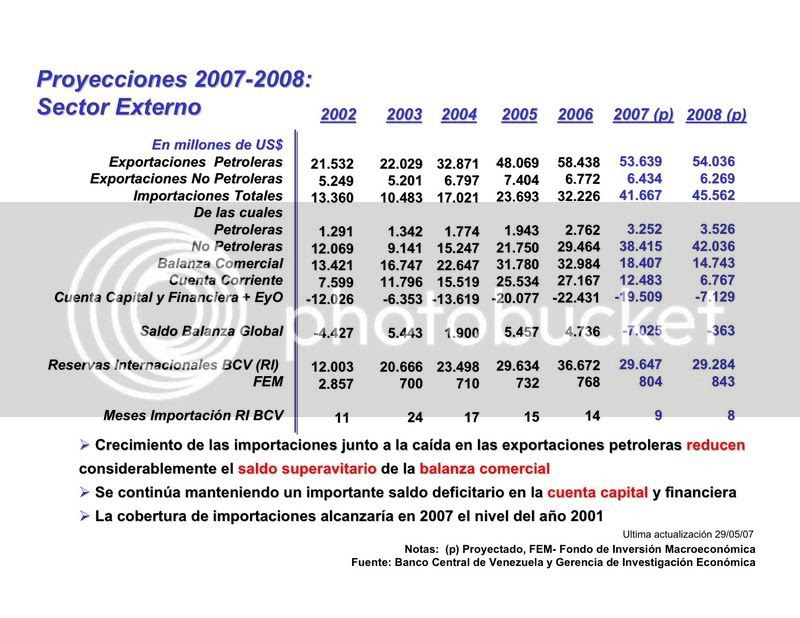 Damn, those rascals in the government are telling the truth about their oil production numbers.

Next, note that non-oil exports have consistently hovered around $6 billion per year. This is not good, they should grow. But given the highly overvalued Venezuelan currency they are stuck there.

Nevertheless, they haven't fallen. This debunks another key point of opposition propoganda. They often assert that Chavez has made Venezuela more dependent on oil than ever. That is only true if you don't properly understand the statistics. Non-oil exports aren't any lower than in the past - they are the same. But by oil exports booming (good for Venezuela) non-oil exports make up a smaller percentage of overall exports even if in absolute terms they haven't changed. So the notion that Venezuela is now somehow more dependent on oil is a statistical mirage created by oil exports doing so well.

Maybe the opposition would like non-oil exports to make up a higher percentage of total exports by just having oil exports fall? Given how they think that probably is what they want.

If you go down to current acount balance (cuenta corriente) you will see Venezuela has been consistently running huge surpluses. That is, what it exports and earns from oversees investments greatly exceeds what it imports and has to pay abroad in debt repayments and dividends. That is, the country is building up wealth - just the opposite of a country like the United States which is running huge trade and current account deficits and in effect selling off its assets. Again, North Americans can only look on with envy at numbers like these (a good trivia question, who was president the last time the U.S. had a trade surplus? ).

This accumulation of wealth is also reflected in the nice fat piggy bank the Venezuelan government has built up: 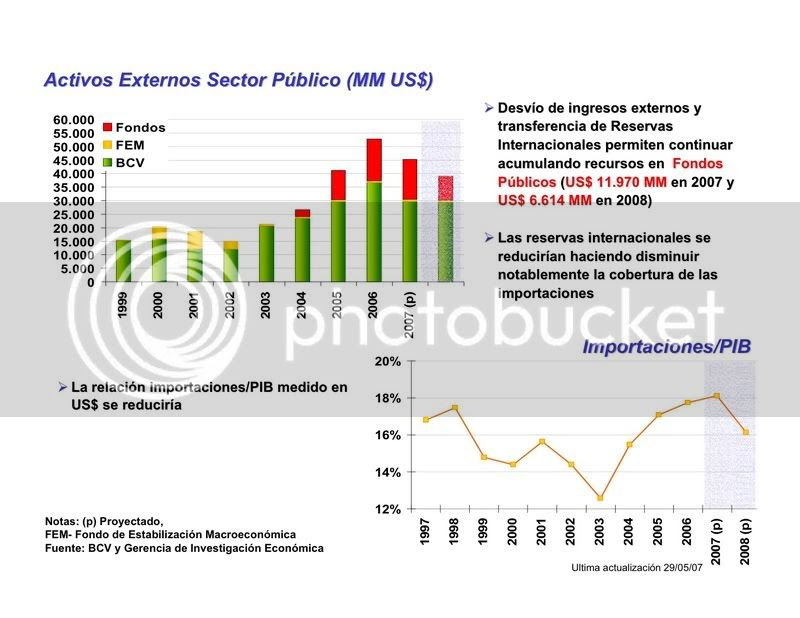 When Chavez first came to office in 1999 the Venezuelan government only had about $14 billion in reserves saved up to do things like cover the cost of imports and make payments on the foreign debt. Last year it had almost $55 billion. And despite doing some silly things like buying up phone companies it will likely have $45 billion stashed away at the end of this year. For those not good at arithmetic that is triple what the country had when the opposition ran it.

Leave it to the left wingers to be the fiscally prudent ones.

Ok, I know a number of you have been sleep walking through all these charts and posts - trust me, now is the time to wake up and pay attention. And too our opposition friends, you may not want to read beyond this point - the information about to be presented may be just too heart breaking for you.

With that said, here we go: 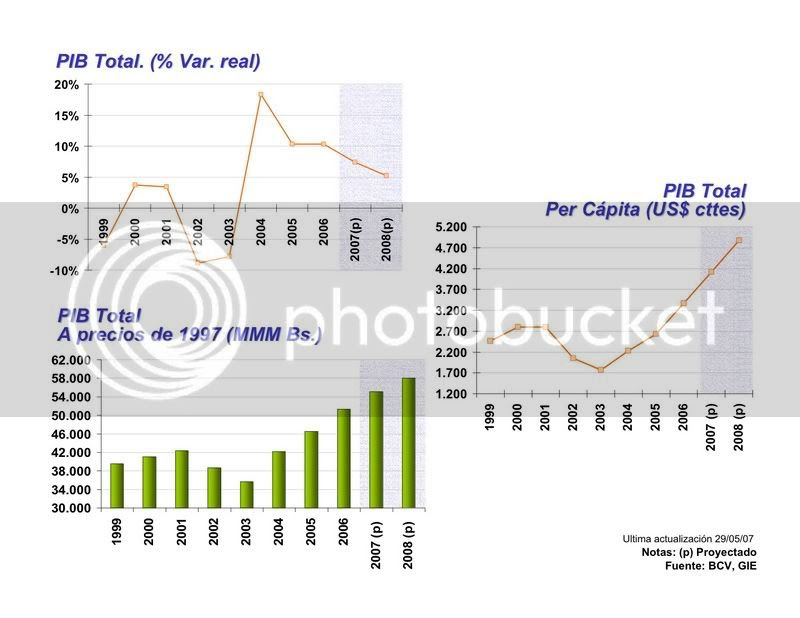 This chart gives information on how the economy has grown but the really key numbers are in the chart on the right. There they give Per Capita GDP in dollars. This is the most basic measure of people's economic well being.

That is right - there has been a 68% increase in per capita GDP under Chavez. And to think some people still can't figure out why the guy is so popular.

But there is more: 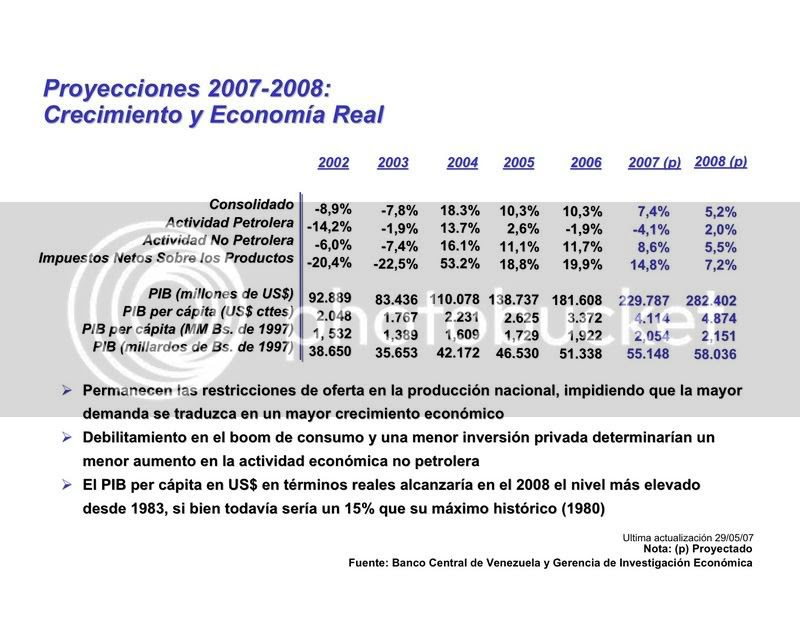 Along the top we see GDP numbers which have been highly positive ever since the opposition led strike of 02/03 ended.

But below in the second group of numbers we see how dramatic the growth of the Venezuelan economy has been. For example, we see that in 2002 the economy was only $92 billion. As of 2006 it was $182 billion dollars and will soon likely be way over $200 billion dollars. Pretty darn impressive.

But get this. In the notes at the bottom of the slide we have this little tidbit:

So in spite of all the non-sense you hear about how Chavez has done in the Venezuelan economy you have to go back decades to find a time when it has done as well. Moreover, it is very close to its all time peak. That is quite a surprise to me as the price of oil is still not as high in real terms as it was back then and also the population of Venezuela is much higher now. But those facts notwhithstanding Venezuela is doing almost as well right now as it has ever done in its entire history!

So if you recall that famous Venezuelan saying - "It's cheap! Give me two" - well those days are back. Of course, Venezuela was never a wealthy country and even in 1980 huge sections of the population did not live well. But in this boom we have already seen how Chavez has made sure it is those with the least who have done the best.

That noted, things are not only as good as they were in the good 'ol days - they are better. No wonder most Venezuelan probably want the guy to hang around to 2027.
|
# posted by ow : 7:30 PM

Things sound pretty bad when you pick up newspapers in the U.S. and read stuff like this:

There are already shortages of staples like milk, eggs, beans, and beef. An extra hour of sunshine won’t matter much to the people if they can’t get a quart of milk down at the store.

That "consumer unrest" stuff sure does sound scarey. Hell, I guess if I couldn't get any milk I would be unrestfull to.

Thing is that, isn't exactly what is happening in Venezuela. Predictably, milk consumption this year is up 17%. Worse still from the escaulido point of view, milk production is up 7%. Of course I am sure any self-respecting oppositionist will point out the remaining 10% must be made up of imports.

So in point of fact the government has really screwed up and raised milk consumption faster than the sexual habits of Venezuelan cows can keep up with by producing new calfs. Is there a Viagra equivalent for bovines?
|
# posted by ow : 5:44 AM

Screw Venezuela for a day

For the viewing pleasure of the poor souls who don't get to live in the great old U.S.A. I thought I would post a YouTube video of a commercial being broadcast all over TV in that great land these days:

Its been a long time since I've written anything on Iraq but I just couldn't let this classic piece of propoganda go by.

For a little 30 second ad it does cover all the bases. They got in the two most basic points that any pro-war propoganda has to cover - the "they attacked us" bullshit and the "if we leave now all the sacrifice will have been for nothing" bullshit. Oh, and they even got in a third point - "I fought over there so my son doesn't have to fight here".

BTW, non-U.S. readers might not know what this is all about but the Bush government has to certify whether or not it is making enough progress in Iraq to justify the continued presence of increased troop levels. Rumor has it Iraq isn't doing so great and even the report can't paper that over.