Where does all the oil go?

Venezuelan oil production and export numbers have long been contentious with many of president Chavez's opponents not wanting to believe Venezuela's production levels.

Not too long ago a staunch Chavez opponent challenged Venezuela's official numbers in an interesting way. Venezuela claims to exports 2.7 million barrels of oil per day. It is reported by the U.S. government that the United States imports 1.3 million barrels per day of oil from Venezuela. So this inquisitive and skeptical person wanted to know where the rest of the oil, aproximately another 1.3 or 1.4 million barrels per day went - clearly not beleiving that they were going anywhere or even existed.

However, if one reads the Venezuelan state oil companies financial statements you can see exactly where all the goes. Just go to www.pdvsa.com, click on "Financial Statements" and go to the 2007 financial report. There on page 72 you will find the detailed listing of how much oil goes to each and every country.

So here goes my little summary of all the major recipients of Venezuelan oil (in thousands of barrels per day):

United States 1,363 (just for fun, check how much the U.S. says it imported from Venezuela here).

All told Venezuelan oil exports were 2,789,000 barrels of oil per day. The above list doesn't add exactly to that because I left out countries with very small amounts. But review the list yourself and you will see it does all add up.

Once again, confirmation that Venezuelan is producing and exporting the oil it says it is. And if anyone doubts it - there are the countries and amounts. Check with them to cofirm or refute the numbers.
|
# posted by ow : 1:34 PM

Hey, whatever makes you happy!

The other day an article in the New York Times on money and happiness (the two DO go together apparently) had this interesting little chart: 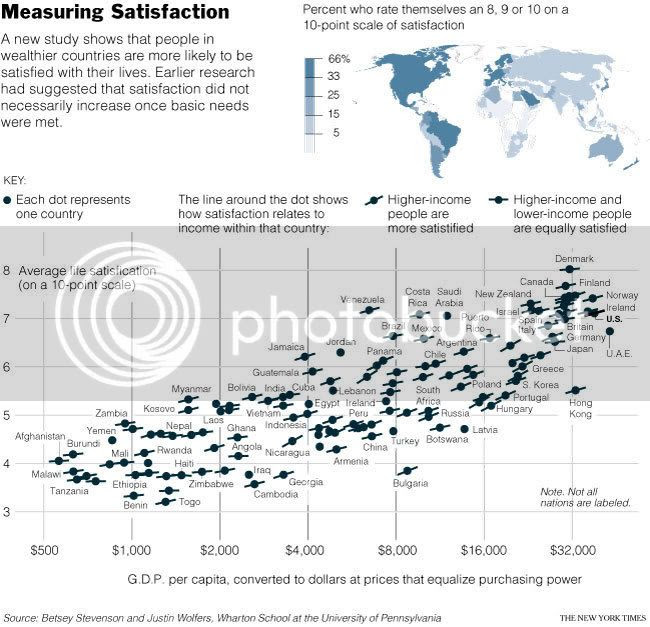 The further to the right you are the more money you have and the higher up the happier you are. Sure enough the countries go up as they move to the right confirming that at least to some extent money buys happiness.

What I thought was interesting was one obvious outlier on that trend - Venezuela.

Note that although they are about in the middle of the pack in terms of income they are very high up in terms of happiness. And this even given the 500,000 perpetual cranks and malcontents that live in eastern Caracas!!

Looking at how they compare to specific countries note they are the HIGHEST in terms of happiness of all the Latin American countries. The only country that comes close is Costa Rica - and they are way ahead of countries we are constantly assured are better off than them such as Chile, Brazil and Mexico.

In fact Venezuelans are as happy as anyone on the planet, even countries where people have much higher standards of living than they do, with only Denmark and Finland have populations that are clearly more content.

Rather embarrassingly for this blogger the countries he keeps holding up as models for Venezuela, such as South Korea, score quite low on the happiness scale - well below Venezuela. I guess the benefit of the higher income is more than offset by having to bust your ass everyday.

Anyways, whatever Venezuelans are doing, whether it is electing leftist leaders, having good social programs, or simply drinking lots of Polar it's obviously working.

There was one thing that assured me the homicide rate was getting better, and that was the fact that the opposition never challenged the government's assertion. Despite being painfully easy to do so, it was only today when they rebutted. As I am sure you have read they claim the murder rate has gone up in Caracas 18% The government rebuttal was quick. The good news is that they both use the same data as a base (2007) meaning that both are measuring the exact same statistic. So one of them is outright lying. The bad news is that Chacin gave these numbers in a press conference and I am witting down what I can remember (which is most of it except for Jan 2008). 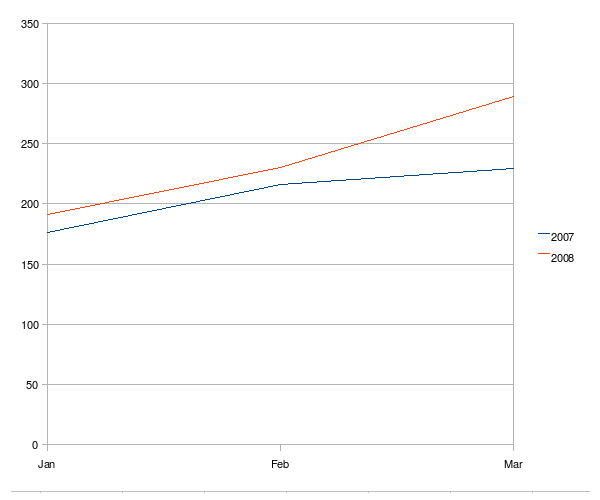 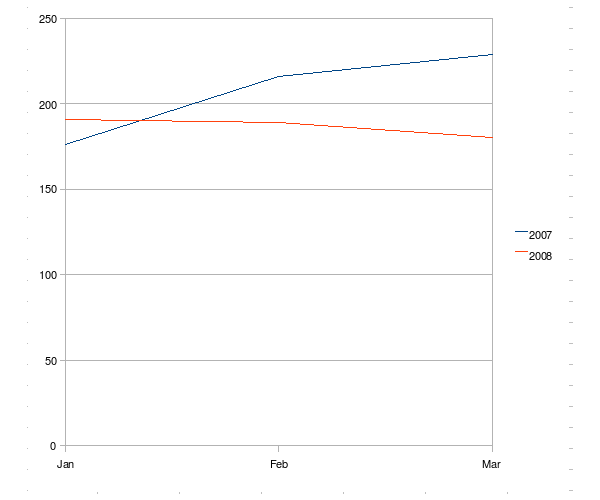 As you can see both diverge quite strongly on 2008 in particular. So who is lying here?

At least some places aren't drowning in red ink

The final budget numbers for the Venezuelan government for 2007 were just released and in spite of all the non-sense one often hears about the government running a deficit it in fact - unsurprisingly - ran a surplus.

That comes to about 3% of Venezuela's GDP.

Maybe our friends in the United States congress can take a trip down to Venezuela, visit the Venezuelan National Assembly, and take notes on how to stay within a budget.

In the past two weeks the Venezuelan government has announced that it will be nationalizing, or better expressed, buying out, the private owners of several cement manufacturers and Venezuela’s only sizable steel firm, Sidor. This comes after last years large buyouts of the main telecommunication company, CANTV, and some electric companies.

However, even if these nationalizations aren’t so bad for the private owners the question remains, are they good for the country? Are they the best use of the countries limited resources?

In most, if not all, of the cases the companies being nationalized are solvent and operational. They produce goods or services, employee people, make investments, generate income, pay taxes, and, of course, make a profit for their owners – just as any private company does. All these companies could have been left in private hands and would have continued to function normally.

Of course, being private companies often owned by foreigners there was one benefit of these firms that did not accrue to Venezuela – the profits. The profits (and by profits I mean only those profits NOT reinvested in the company) go to only a few individuals who likely take the money out of the country and in any event use that money simply to pad their personal fortune.

One question that therefore arises is what proportion of the companies revenues are profits? Given that I haven’t seen that information made public we can only guess. But for most manufacturers true profits are somewhere in the neighborhood of 10%. That is, 90% of their revenue goes to paying salaries, buying materials, paying taxes, making investments, etc, and only about 10% is skimmed off by the owners.

What is the significance of that? The significance of that is that Venezuela’s economy gets 90% of the benefit of these firms and only roughly 10% doesn’t do anything to help the country. Hence, it is good for Venezuela that these companies exist, producing goods and services in Venezuela, and through their economic activity they help increase the standard of living of Venezuelans.

Now, what changes when these companies are purchased by the Venezuelan government? There are a couple of possibilities.

The first is that the company is poorly administered by the government, under invests, doesn’t respond to changes in markets, etc, and ceases to be a profitable firm. In that case the government generally has to keep putting more and more money into the company and it becomes a permanent drain on the states resources. This is the worst case scenario.

An alternative outcome, and a much better one, is that company continues to be well run and generates profits. Given that the government now gets the profits too 100% of the wealth generated by the firm now remains in the country. So in this case it may seem as if the nationalization was a good idea.

However, before being able to say that we need to take account of another VERY, VERY big factor - what the alternative uses of the money used by the government to purchase a company could have been.

Let’s say the government pays the owners of Sidor $2 billion to purchase it (I’m just making up this number for the sake of example).

After spending the $2 billion the only thing NEW that Venezuela has is the rights to Sidors profits. That may or may not be a good “investment” depending on what the exact profit rate turns out to be.

But what is important to note is what Venezuela will NOT get through any of these nationalizations; new steel mills or cement factories or new telephone systems – those already existed and simply changed hands. There won’t be any new jobs as all the jobs working for those firms already existed. There won’t be any new economic output as the goods and services produced after nationalization were already being produced before it.

In sum, the only benefit that Venezuela gets from nationalizing these companies is it now controls their profits and it only even gets that if it ensures the companies are well run and remain profitable.

Now let’s turn to an alternative use of that money. Instead of buying existing steel mills or cement factories suppose the government built new ones.

In summary, if the Venezuelan government uses its oil revenues to purchase an existing company its Venezuela’s only gain is whatever the profits of that company are. But if it instead uses those resources to build NEW industries it gets far more as much new wealth is created, economic output increases, and the standard of living of Venezuelan’s increases. This is not to even count other tangential benefits that may accrue such as increasing the skill level of your work force, obtaining new technologies, reducing the economies dependence on oil, etc.

It is more than clear that from an economic point of view it would be better not to nationalize Sidor and the other companies and instead invest the money in building up new industries. These nationalizations are therefore a misguided and a wrong policy for Venezuela to be pursuing.

The fact that the Venezuelan government is pursuing this type of policy is evidence that it is fighting the wrong battles. Yes, Venezuelan’s are generally underpaid and have a low standard of living.

The reason for that, however, is not that they are exploited by foreign companies who take vast sums of wealth out of the country. The principle reason is that the country is underdeveloped and simply doesn’t generate enough wealth for Venezuelans to live well, even if all of that wealth remains in the country. Hence, the central issue facing Venezuela isn’t how to distribute the countries economic output more equitably (though that too can be worked on in various ways) but how to INCREASE its economic output.

Putting this in terms that would be familiar to Marxists, Venezuela’s problem isn’t who OWNS the means of production; it is that it doesn’t have ENOUGH means of production. For that reason the precious resources the Venezuelan government has would be much better employed creating new means of production rather than simply changing ownership of existing ones.
|
# posted by ow : 12:11 PM