If only they'd been efficient when they had the chance...

Previously we saw that the "socialist" factories in Venezuela were not that many, not that big, and not that productive. Certainly any new industry is good. But clearly this industry, which is on such a small scale, is not in a position to contribute much to Venezuela's well being and make up for the oil price collapse it is now facing.
However, those are not the only factories that Venezuela has built or is building.  They have worked on corn processing plants, milk processors, and auto parts factories we are told.
And indeed, in another part of the annual report of the President we find this detailing precisely those projects: 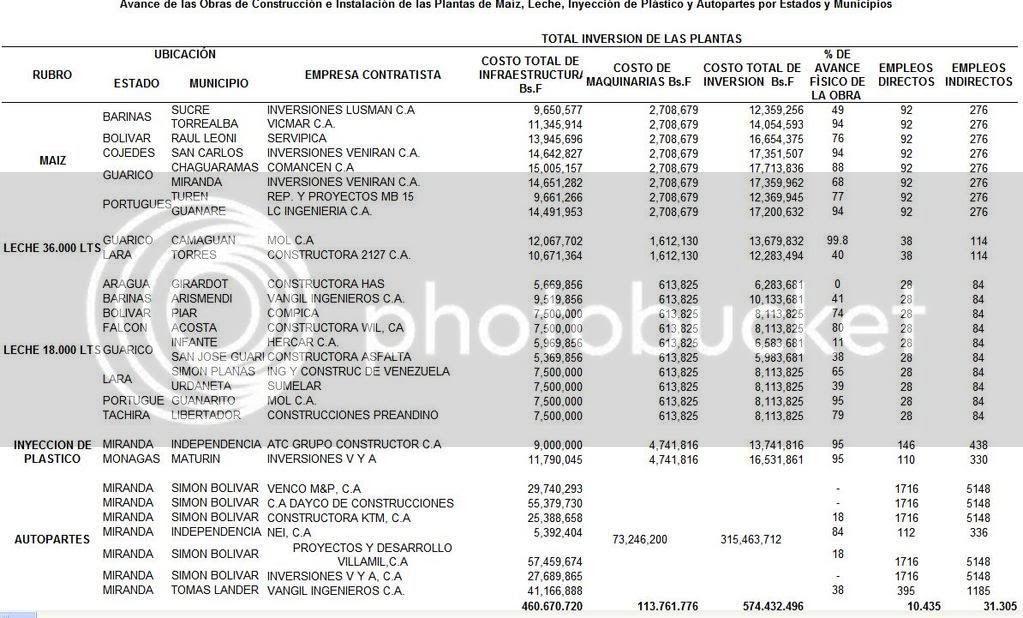 The table above details each project and gives how much the infrastructure cost, how much the equipment cost, the total investment, the percent completed the project is, the number of jobs created, and the indirect number of jobs created.
Examining this table in detail we see the same thing we saw with the "socialist" factories, that the projects are very modest in size.   In fact, that is probably being overly polite about it.
For example, the corn processing plants have investments between $5 million and $7 million dollars each.  Given such tiny investments it is not surprising that not a single one of them employees more than 100 people.  Taking all the projects together, and note they are not yet completed, they won't even employ 3,000 people either directly or indirectly.
The milk plants are if anything even smaller.
Then we have the plastic parts factories that together are only about a $15 million investment and will employ less than a couple hundred people.
Finally we get to what is by far the biggest project, the auto parts factories.  These represent an investment of $150 million dollars which is huge compared to the other investments but still quite small by the standards of most industrial projects.  These factories will employ over 10,000 people which is certainly a respectable amount.  But there is a catch - the projects are only on average about 18% complete!!!!!   That is, five years into what should be a full scale industrialization program their auto parts factory is no wheres near ready to come on line.
Of course, these investments, just like any industrial investments, are good and to be applauded.  But the point is they seem to be few and far between and VERY small relative to what Venezuela needs.  All told, the factories listed above won't be even a blip on Venezuela's economic statistics when they are completed - they are just too few and too small.
When this problem of these investments being too few and too small was pointed out previously some argued that given the governments other investment priorities - such as health care, infrastructure, and education, there simply were not enough resources to have done more.
That is simply not true.  As was pointed out in a series of posts over a year ago (here  and here) the Venezuelan government has wasted many billions of dollars in various ways.  Just to review one we can look at this chart from the Venezuelan entity that controls foreign currency disbursements, CADIVI: 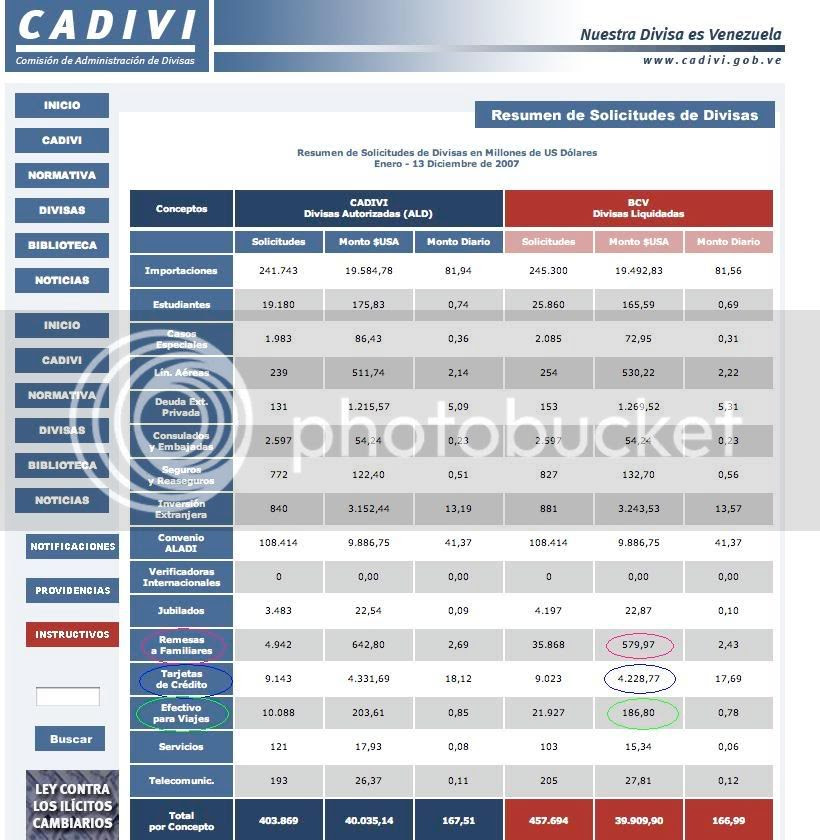 The items circled above represent some (but by no means all) of the waste the Venezuelan government has had over the past few years.  The credit card expenditures of $4.2 billion, money sent abroad to relatives of  $579 million and the cash for overseas trips of $186 million represent about $5 billion dollars given out to upper class Venezuelans for them to waste abroad or on purchases made abroad.  And remember, these are dollars being given out at highly favorable exchange rate (ie, very cheaply).
This chart was from 2007 but the chart from 2008 would show similar waste.
Now here is the rub - it is NOT as if the Venezuelan government couldn't have cut down on this waste.  In point of fact they have done just that.  Last year they cut down on the amount allowed for Internet purchases.  At the beginning of this year they halved the amount given to people for travel abroad.
And guess what - even with these cuts the sky didn't fall.  In fact, Chavez just won a big vote on February 15th AFTER these cuts were made.  This proves the point I made a year and a half ago (for those who don't remember it is here) that these expenditures were not politically necessary, after all most of the beneficiaries never voted for Chavez in the first place, but rather it was money stupidly wasted because, well, they were rich and thought they had the money to waste.  Finance Minister Ali Rodriguez just admitted as much.
Now lets just see how this quantity of money wasted compares to the industrial developments outlined above.  Assuming they can save half of the $5 billion outlined as being wasted that would come to $2.5 billion per year.  Combining the amounts for 2007 and 2008 you get a total of $5 billion dollars in money that could easily have been saved from the above waste and used for industrial development.
Now, note that all the industrial development projects listed above total about $250 million dollars we can see just with cutting down on this one type of waste they could have had 20 times (that is right, TWENTY TIMES) the amount projects built as they have above.  Instead of creating a the 10,000 direct jobs they are creating they could have created 200,000!!  Now, that actually WOULD be big enough to show up in Venezuela's economic statistics.
In sum, we can clearly see that Venezuela could have done much, much better  in its industrialization efforts.  It simply didn't have the right priorities nor a sense of urgency.
Sadly, given that the funds they have set aside for development project are now being rapidly consumed just keeping the Venezuelan economy afloat it is probably too late to do anything about this.  It is simply one more HUGE missed opportunity in a country whose history is littered with missed opportunities.

The Aluminum Sector is in Crisis

What happens when you have a an industry that is barely in the red during high prices? it becomes an catastrophe when prices fall by 60%. That is the case with Alcasa and Venalum, both produce Aluminum at 3500$ per ton, yet the current price is 1200-1500$ per ton.

The disaster only gets worse when you figure out what is the cost of getting out of it, by one person's account it means 6 billion dollars, a figure way too inflated for me to believe BTW. The problem preceded Chavez, but he gets one hell of the blame for letting the problem fester for so long, and it really really makes me worry that the same will happen to Sidor again under re-nationalization.

Too much labor and too little technology, that is the problem with Alcasa and Venalum, is the cost of fixing them so they can fall back down worth it? It is, but there better be accountability from now on, which I doubt.
|
# posted by Flanker : 12:04 PM