Taking a good look in the mirror

This little excerpt from Thursdays New York Times sure seems to have the Venezuelan opposition pegged:

"We were the party of the intellectuals," Dr. Khatami said in a recent interview. "So we must change this to develop ideas for the poor and workers. We will still talk about democracy and human rights, but we should explain to people how it will make their lives better."

There is irony, and then there is irony. The following letter was published TODAY in the Wall Street Journal:

In response to your June 30 editorial “Wanted: A constructive opposition”:
Bush critics on the right and left fail to understand that Iraq is terrorist flypaper. It forces terrorists to fight our strength (our military) on a battlefield of our choosing with numerous allies (the vast bulk of the Iraqi people) with their weakest ability (conventional military strength). Instead of hiding in camps in countries around the world planning attacks on our civilians, the terrorists are going to Iraq and getting killed.

Meanwhile, people who should know full well the reality of Iraq (Wes Clark, Joe Biden, John Kerry, Hillary Clinton, Ted Kennedy, et al.) are undermining the war for their own political ambitions. What I can’t understand is why some on the right seem so willing to join with the hysteric left.

Notes from the South Land

I realize that those up north may be distracted by their repressive government sending a New York Times reporter to jail. I empathize - its hard not to be distracted by this. After all it is kind of fun watching one of the biggest cheerleaders of invading Iraq - Judith Miller - get to cool her heals in jail for a while. While she spent 2002 telling the whole world how big and ominous Iraq's Weapons of Mass Destruction program was she has been rather quite ever since upon invasion none of those WMDs ever turned up. But as someone mentioned, maybe she'll find them in her jail cell.

Anyways, there were some newsworthy items in Venezuela today so let me give a little roundup:

Maria Corina Machado will find out tommorrow if she will actually go to trail for various charges such as conspiracy against the Venezuelan government. If she does go to trail it could really put a crimp in her plans. According to Tal Cual she is actually considering a run for President in 2006 and has been asking her advisers what they think of the idea. It will be recalled she is the person who just by happenstance showed up in the Venezuelan presidential palace, Miraflores, when the coup was happening and who also got invited to the Oval Office of the White House by Bush. She seems to have a thing for presidential offices and has now decided she wants to be in one full time. Also according to Tal Cual she has polling data suggesting that she actually has a 12% approval rating which is higher than anyone else in the opposition has (Chavez is around 70% in the polls). I wonder if there is a law banning you from running for office while in prison.

On a happier note El Universal pointed out that autosales were up 94% in June 2005 as compared to June 2004. Half way through the year sales have totaled 97,000 units which by Venezuelan standards is excellent. So much for the middle class hurting under Chavez.

With all this positive news from Venezuela maybe some of the now hounded and repressed U.S. reporters will seek jobs here. Lord knows, the Venezuelan media could sure use some real reporters. Even Judith Miller would be an improvement. Marta Colomina better watch out.
|
# posted by ow : 4:26 PM

Asleep at the wheel

I see while I was asleep at the wheel this weekend Critical Montages picked up the slack to keep people informed on Venezuela's relations with Iran and on the new Petro Caribe.

And while the opposition does everything it can to make hay out of the tragic police killing of three students Elio Cequea has the real deal.

And speaking of the A11 coup causing a lot more deaths than these police officers did here is a rather ironic picture from this weekends rally against the police violence. The placard carried by these women calls for release from jail of the very person responsible for setting in motion the deadly events of A11!!!!! 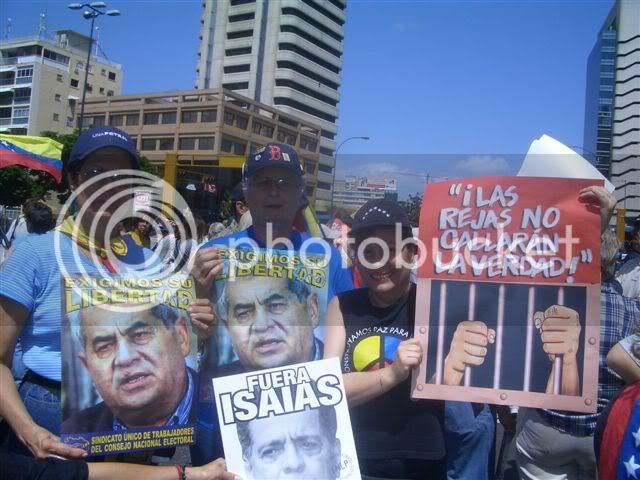 In catching up on the news I noticed the Venezuelan Central Bank released a report showing that in June inflation was a .6% which is significantly lower than it had been. In May inflation had been 2.5% and in June 2004 it was 1.9%. Year to date inflation is 8% whereas at this point last year it was 11%. Hence, the donward trend for inflation since the end of the opposition sabotage of 02/03 continues. Growth up, employment up, inflation down, income up for the poor - its amazing what happens when Chavez is allowed to govern.
|
# posted by ow : 7:38 PM

For those who don't remember who he is Kenneth Pollack is a Middle East analyst who was one of the chief advocates of the U.S. invasion of Iraq. He even wrote a book on why Saddam needed to go and during the initial invasion was popping up on news programs cheerleading for the invasion all the time.

Now that the U.S. indevear in Iraq seems to be heading south he is doing a good Thomas Friedman immitation in pointing out how everything would be fine if only Bush wasn't screwing everything up. Last week he wrote an article in the New York Times telling the U.S. government how it should be running the war. Now if he really cared about the outcome of the war, as opposed to being concerned what the war is doing to his reputation, he would apply for the vacant U.S. ambassador position in Iraq so he could put his ideas in practice. But I guess the thought of having to ride down the dangerous Baghdad airport road to get his new office is too much to bear.

In any event there was one little tib bit from the article that did jump out at me:

Perhaps the most underreported story in Iraq today is the theft of its oil revenues. Thanks to the high price of crude, Iraq should make well over $20 billion from oil sales this year, yet almost none of this money seems to be going to actual reconstruction projects. One senior Iraqi official told me recently that the theft of oil revenues today is making Saddam Hussein's regime look frugal by comparison.

So appearently no one knows what the U.S. occupiers and their puppet regime has been doing with the oil money. And they are making Saddam look frugal?!?!?! Well, that takes some doing. Although considering that the Pentagon’s favorite Iraqi exile for quite a while was someone accused of massive bank fraud in Jordan I guess we shouldn’t be too surprised.

Not to worry though. Halliburton will soon have a crack group of accountants on the case finding out where that money is. They, more than anyone else, certainly wouldn’t want it stolen. After all, every dollar stolen is a dollar less for the war profiteers – and Halliburton simply won’t have that.
|
# posted by ow : 5:23 PM