The things people say when they think no-one is listening

As if things weren't bad enough for Rosales he had to go and reveal his contempt for most Venezuelans. Of course, he didn't openly do this on Venezuelan TV or at a rally in Venezuela. Rather he did it while he thought he was talking amongst friends - that is while speaking on a Miami TV program that is aimed at right wing Cuban exiles. Below is a translation of what he said when responding to the commentators question about his chances of winning the election:

I am going to analyze things in three dimensions. First, the country is divided in the following way according to the statistics, the studies of public opinion and the polls carried out scientifically. There is a 30% more or less, or 33%, of the populations that are what is called "Chavesismo" or "officialista" that are in reality parasites that are living off the government and that are subsidized by the government. Then we have 25% that are the opposition and the rest that are people who go from one side to the other and that are definitely the people who will decide the election.

Now given what an inflammatory and incredibly insulting statement this it may be hard to believe he said it. Well here is the interview in its entirety which leaves no doubt that he really did say that the people supporting Chavez and benefiting from his social programs are parasites. It is at the six minute mark:

Now, does it really surprise me that he THINKS most Venezuelans (and lets be clear, the people who support Chavez and benefit from his social programs are not 33% percent of the population, they are more than half) are parasites? No it doesn't. As I said before, I think all his campaign promises are lies intended to win votes but that will be forgotten very quickly after the election.

But having said that, I never thought he was so STUPID as to say it publically. I am sure this incredibally insensitive and hostile statement will be quickly worked into Chavez campaign advertising.

Truthfully, I appreciate his candor and his willingness to say what he really thinks. It should help wake up any Venezuelan's who were seduced by his promises to the reality of his lies. Further, I am a partisan supporter of Chavez and want him to win an overwhelming victory. That has been looking dicey lately but this statement, widely publicized and repeated over and over so that everyone has the chance to hear it, can't help but show millions of Venezuelans why they too should want an overwhelming Chavez victory.
|
# posted by ow : 3:08 PM

It sure hasn’t taken long for the Venezuelan presidential campaign to go negative – both sides have launched some hard hitting attack ads. I thought it would be interesting to look at some of them.

First, in response to Chavez’s new campaign theme the Venezuelan opposition came out with a very clever rebuttal: 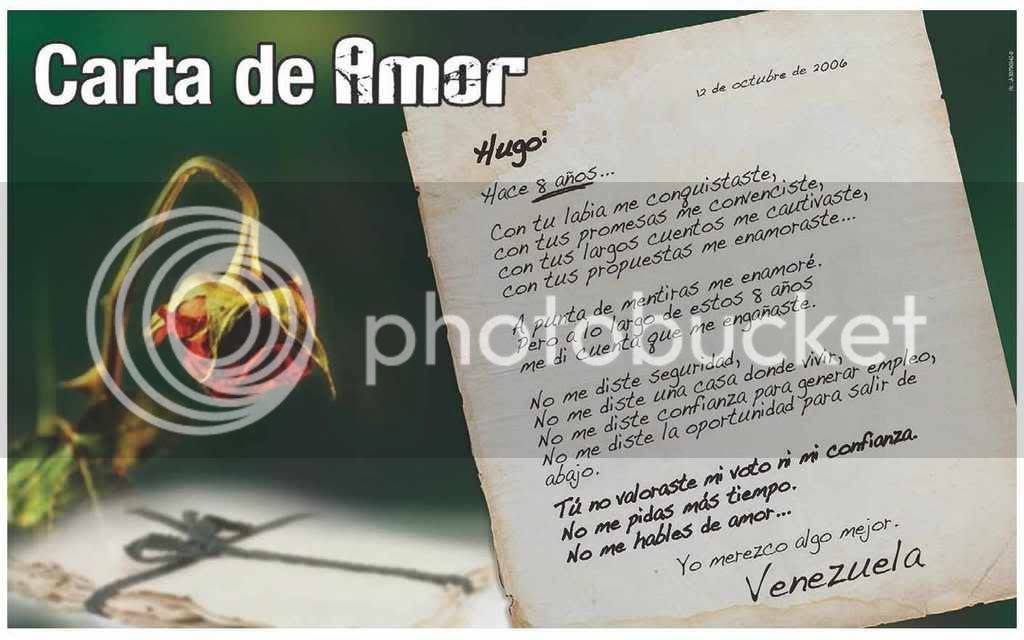 The “love letter” lists what it claims its reasons are for now longer wanting to love Chavez. It reads:

You won my heart,
with your promises you convinced me,
with our long stories you captivated,
and with your proposals you made me fall in love with you…

Based on lies I fell in love.
But during these past 8 years
I realized that you deceived me.

You didn’t value my vote, nor my trust,
don’t ask me for more time,
don’t talk to me about love.

Clearly the opposition has some good and creative ad agencies – it is indeed a clever advertisement. Will it be effective though? I tend to doubt it. If Chavez’s administration had been one of failure it might. But the reality is most peoples lives have improved, the economy is booming, and a massive public works dot the landscape.

I doubt there are many who feel deceived by Chavez. . To those whom he promised much he has delivered much. Those who don’t love him now are almost always the same people who didn’t love him 8 years ago. And they, the middle and upper classes, are people who he never really tried to woo in the first place.

Of course, the pro-Chavez forces have responded with some negative ads of their own: 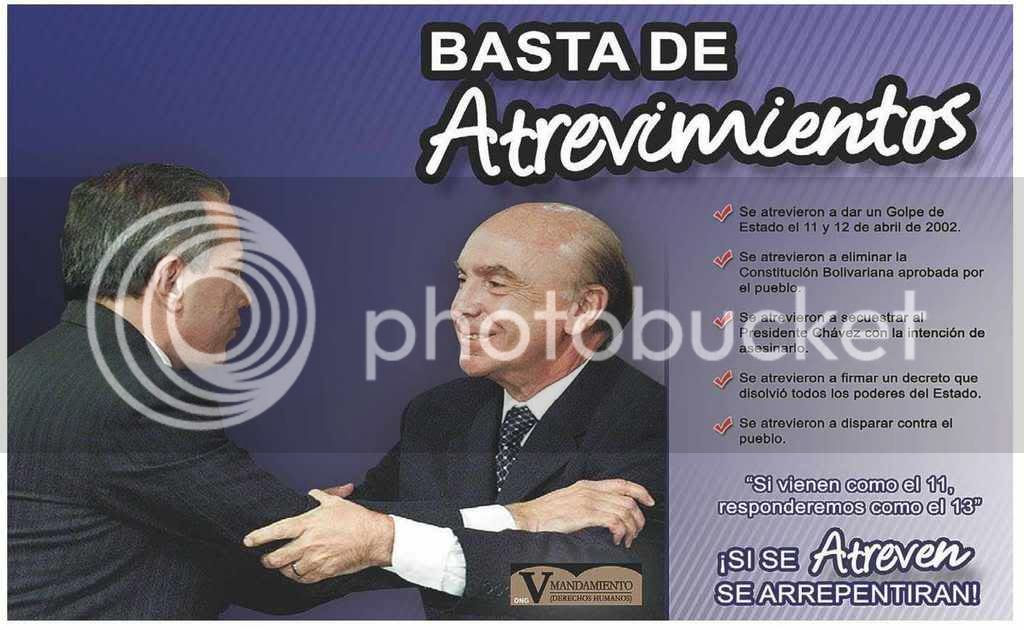 This ad highlights Rosales embracing the “Dictator for a Day” Pedro Carmona. Clearly the ad seeks to remind voters that Rosales has been tied to the anti-democratic opposition forces.

Mocking Rosales campaign slogan of “dare to” it reads”

They dared to sign a decree desolving State power

They dared to shoot against the people

If they dare, they will regret it.

Again, a clever ad. Will it be effective? Again, I’m doubtful. Everyone knows that Rosales supported the coup and those that are upset about it aren’t likely to ever have considered voting for him to begin with.

In fact the most effective negative ads I have seen are probably these two: 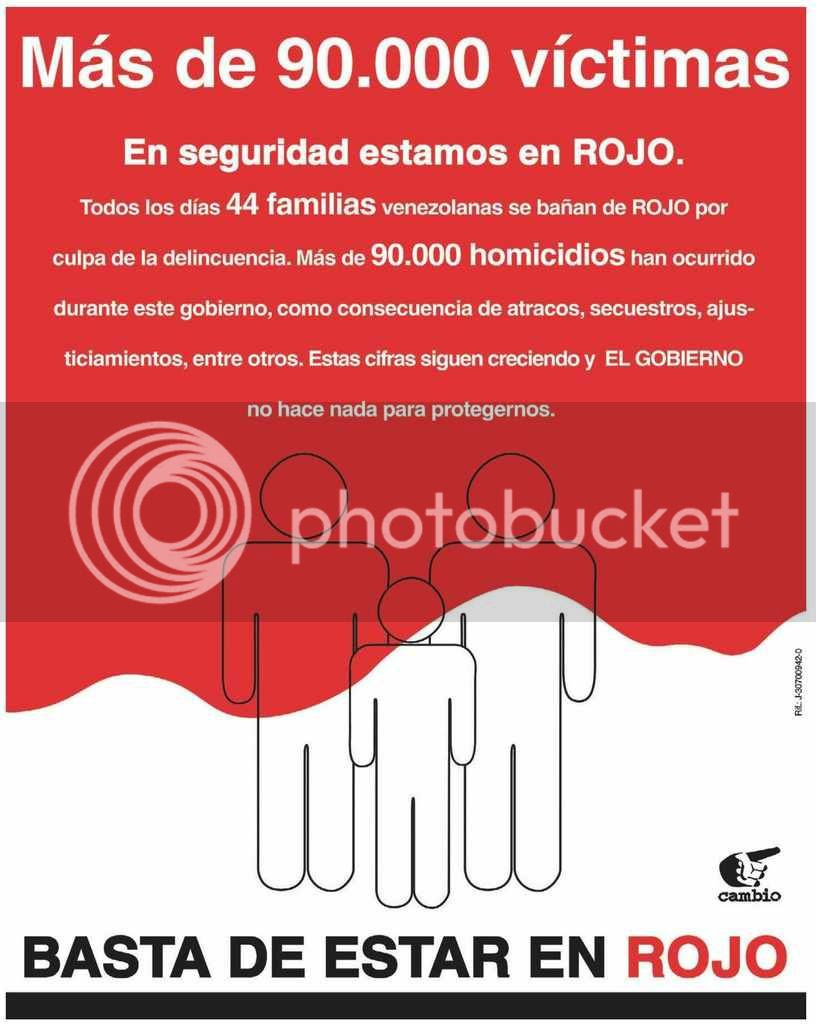 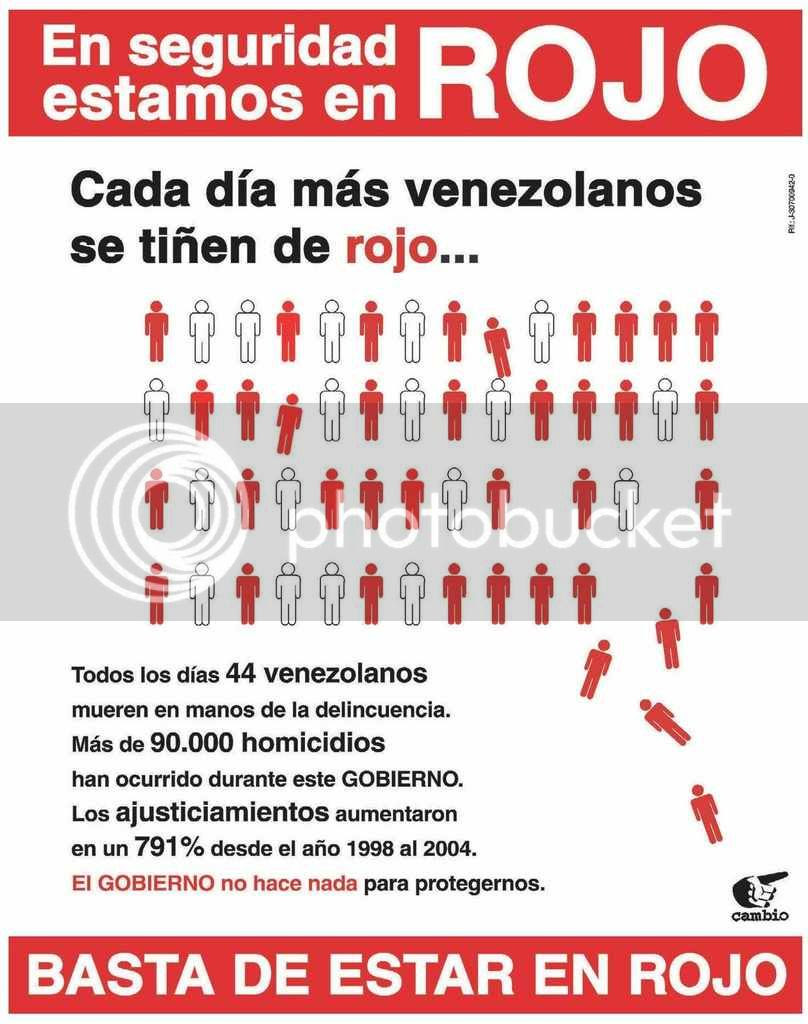 They both attack Chavez where he is most vulnerable, on the issue of crime by referencing how many have been killed during his tenure. Moreover, they cleverly tie that into the color most associated with Chavez – red – when they say “enough of being red”. These ads ARE likely to have some effect.

BTW, note that all of these ads seem to be sponsored by groups apart from the actual Chavez and Rosales campaigns. I’m therefore not really sure if they are legal. That will be something interesting to look into.

Chavez, by being an incumbent with many a positive accomplishment, will likely realize that he is better off staying on the high road staying positive as he does with this ad: 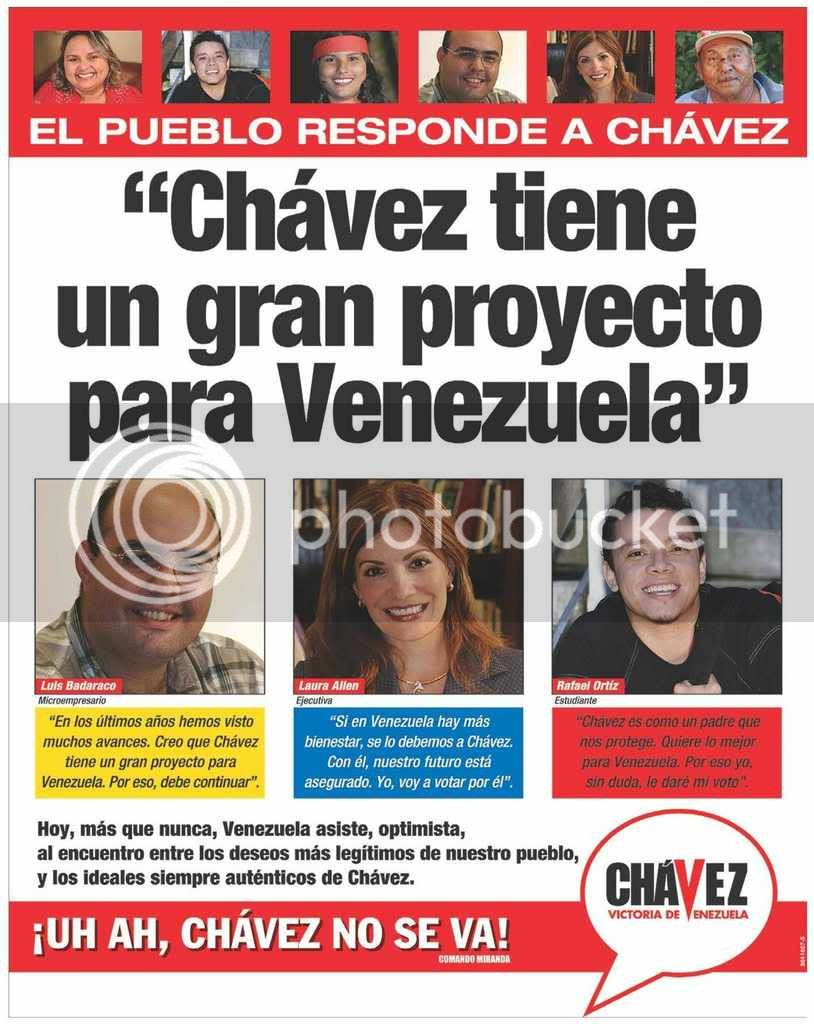 How effective is all this advertising which is making some newspapers quite wealthy? We’ll find out come December 3rd.
|
# posted by ow : 7:37 PM

And not a minute too soon

OPEC has finally decided to act. In the face of declining, though still high, oil prices they have finally agreed upon a cut of 1.2 million barrels per day:

OPEC agreed on Friday to curb its output by 1.2 million barrels per day,
its first cut for more than two years, to halt a precipitous fall in
prices.

The reduction, amounting to 4.3 percent of OPEC's September production, was deeper than anticipated and the biggest since January 2002. It trims OPEC output to 26.3 million bpd from November 1.

"The credibility of OPEC is at stake," Algerian Energy and Mines
Minister Chakib Khelil told Reuters before the meeting that began Thursday and ended in the early hours of Friday.Some ministers said a further cut of 500,000 bpd could follow when OPEC next meets in Abuja in December, to address high fuel stocks in consumer countries, particularly the United States, and a projected drop in demand for OPEC oil in 2007.

In a statement issued after the meeting, OPEC expressed concern that
oil supplies were far outstripping demand.

"The over-supply situation and imbalance in supply/demand fundamentals have destabilized the market," it said.

Khelil said all 10 OPEC members subject to quotas would participate in
the cut. Only Iraq, struggling to get its oil industry back on its feet after
war and sanctions, was exempt."Everybody has a share," Khelil told
reporters.

Ministers were aware their failure to speak with one voice in the two
weeks leading up to the hastily arranged talks had contributed to oil's slide to $58 a barrel this week, 26 percent off its mid-July peak and near its lowest level this year.

Once in Doha the group that pumps over a third of the world's oil presented a united front.Saudi Oil Minister Ali Al-Naimi broke his public silence to say the world's leading exporter fully supported the plan to cut supplies and he flagged further cuts may lie ahead.
"This is not the end of the road," he told Reuters.

Gary Ross, CEO at PIRA Energy consultancy, said it was clear OPEC meant business."OPEC sees itself being challenged by financial speculators and will respond aggressively to make clear to the market its price objectives and willingness to cut volumes to achieve these objectives," Ross said.

Arriving in Doha, ministers already had a pretty clear idea of their
individual production cuts. There was broad acceptance that reductions must be made to real oil supplies rather than nominal quotas that have little relation to the barrels pumped.

But members jealously guard their quotas that are bound up with national price and market share.

In the days before the meeting Iran and Venezuela, struggling to meet their official limits, were wary of a supply-based cut that would see them ceding market share to OPEC producers that were pumping far above quota, notably Algeria.

To sidestep the issue of quotas and market share, it published only a
list of individual cutbacks without giving the basis for the calculation or new national limits.

OPEC's biggest member Saudi Arabia, will shoulder around 32 percent of the cut, amounting to 380,000 bpd.

Analysts said OPEC's next task was to prove to the market it really was
curbing supplies. Saudi Arabia said it had already notified its customers of cuts to November exports.

"The group must provide the market with a credible scheme or prices may fall further," ABN AMRO analyst Geoff Pyne said.

"A price of $60 for U.S. oil is perceived as a level that does not harm
world economic growth whereas $70-$80 does, or at least raises enough concern that central bankers start increasing interest rates," said analyst Mike Wittner of Calyon.

OPEC's official ceiling has been at 28 million bpd since July 2005.
During that time output has shifted around 500,000 bpd either side of the official limit.

There are several positive developments here. First, OPEC recognizes the need for a significant cut with even the most consumer accomadating member, Saudi Arabia, making a very large cut. More encouraging, they recognize that these cuts alone are probably not enough and are already talking about cutting another 500,000 at a later time (though I think they should do it right away).

The best news though is there seems to be consensus within the organization that a $50 - $60 price band is what they should work for. That seems quite reasonable and would allow OPEC members to still reap historically high prices. It may not be the highest price attainable, but it could well be argued it is the highest SUSTAINABLE price. If OPEC members can put rivalies aside keeping prices in that range should be a realizable goal.
|
# posted by ow : 5:59 PM

Yesterday I blogged on the construction of the new rail line and metro extension that were inaugurated today. So its only appropriate that there be a follow up post with the new systems in action.

First, there was some last minute touching up, particularly in the Simon Bolivar station which connects the train to Tuy with the number 3 metro line: 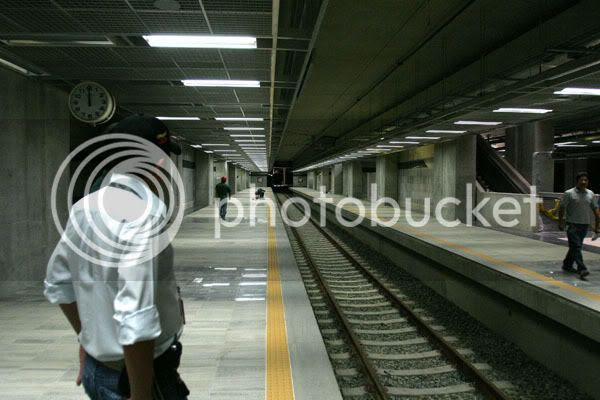 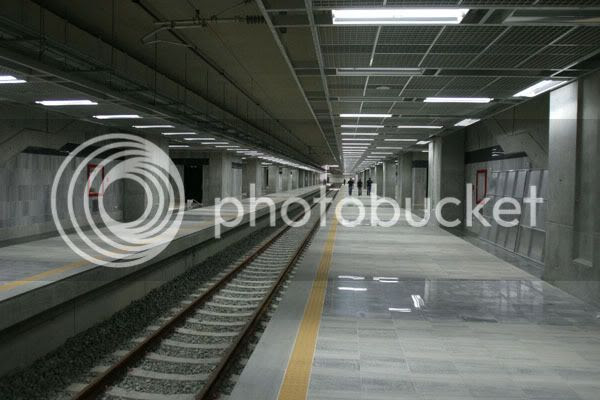 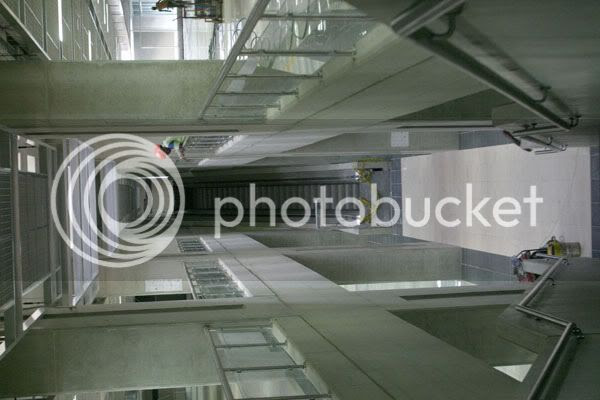 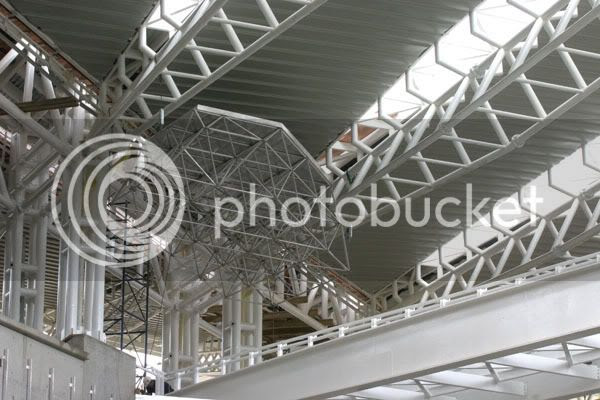 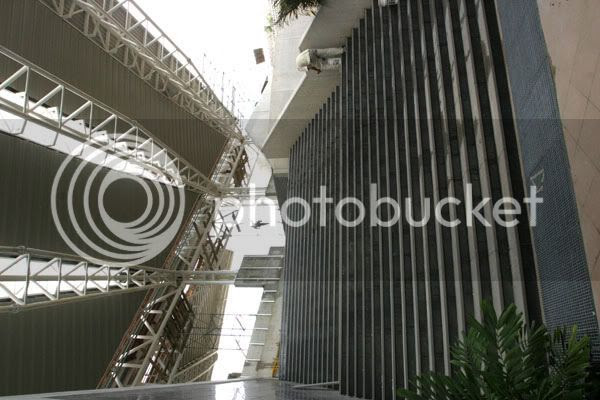 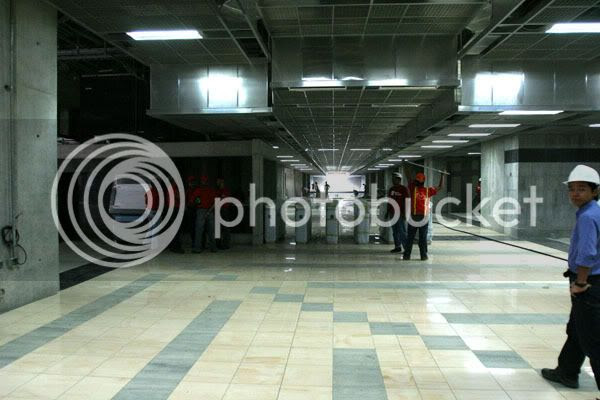 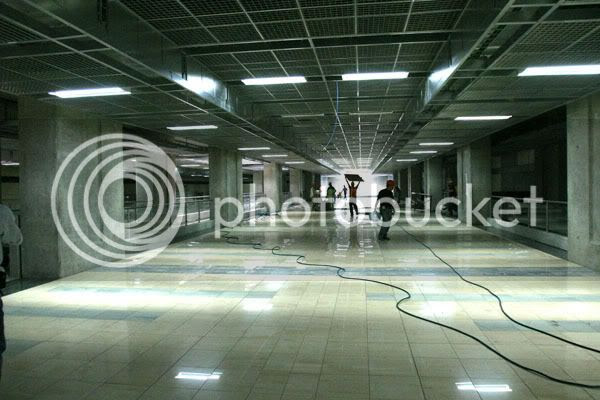 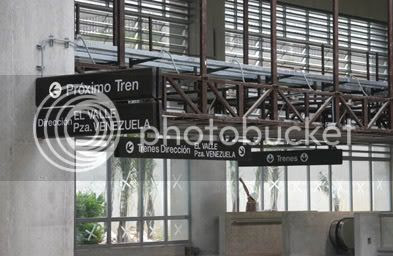 Everything was ready by this morning, and the festivities started with Chavez in the front of the first subway train going down the metro line: 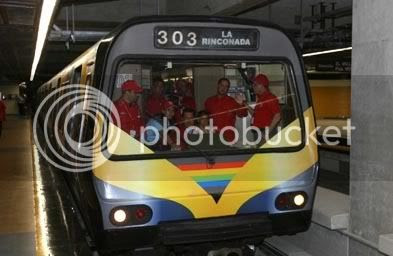 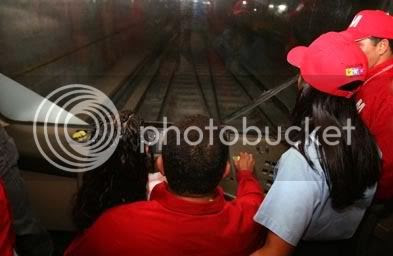 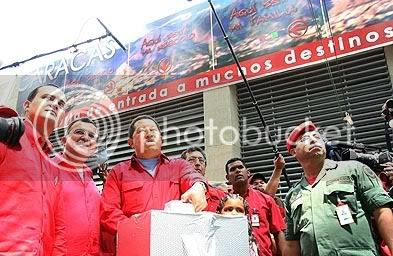 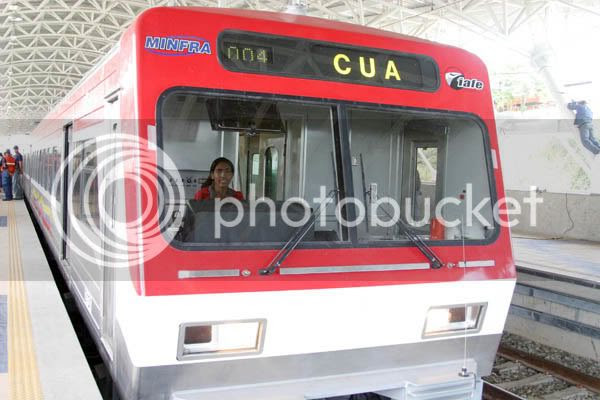 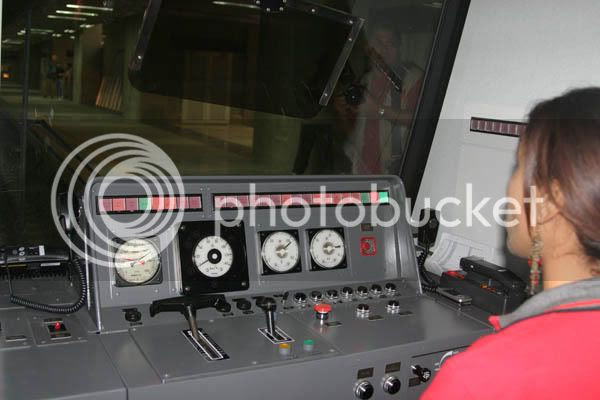 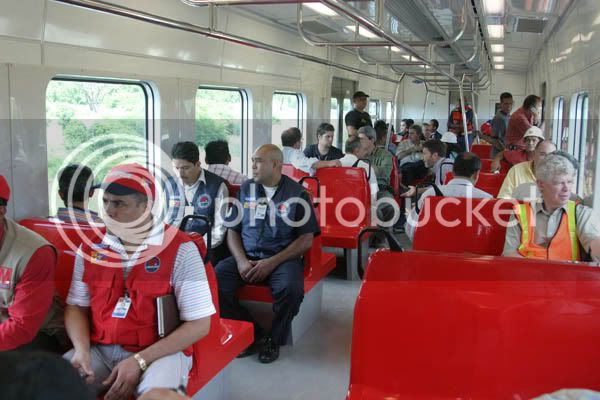 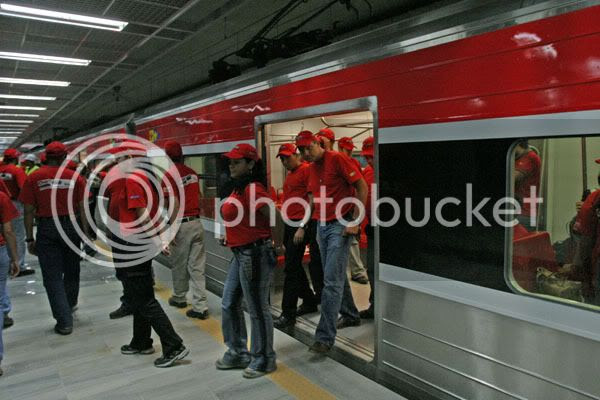 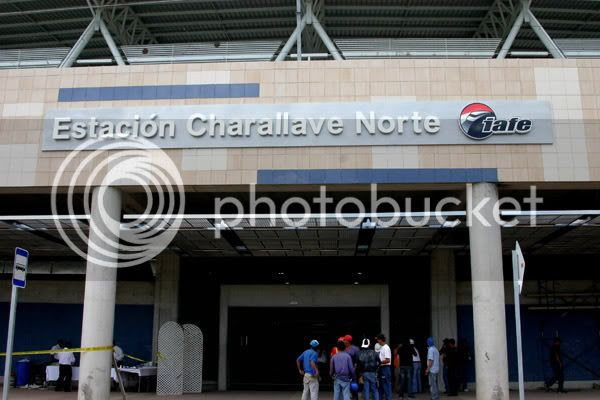 BTW, good news for those who want to ride it. The new train is free through December!

A stunning six new rail systems are being inaugurated this year in Venezuela. So far three have been opened and there are three more on their way!

Here is a very good video with information on the train and some historical information and video on passenger trains in Venezuela: