A constant opposition refrane during the Venezuelan presidential election was that Chavez was building all sorts of public works, and rushing them to completion, simply to garner more votes. If true, one would think that the Venezuela's massive public works would grind to a halt now that the election has come and gone.

Yet look what just showed up - the new trains that are to make up Venezuela's first true inter-city passenger railway in decades: 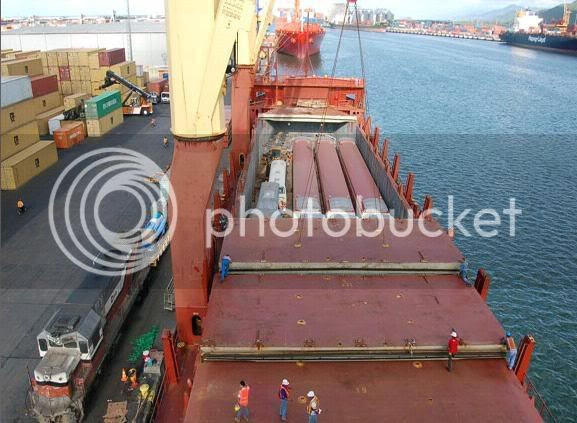 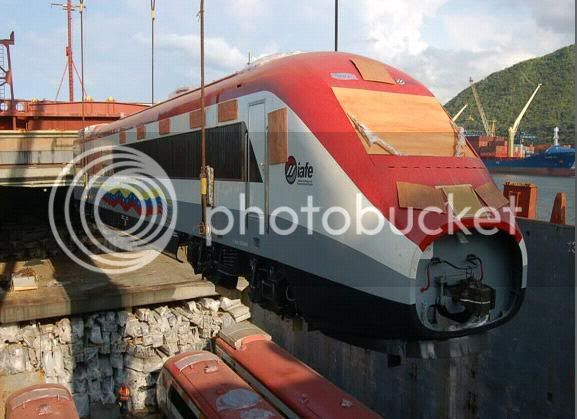 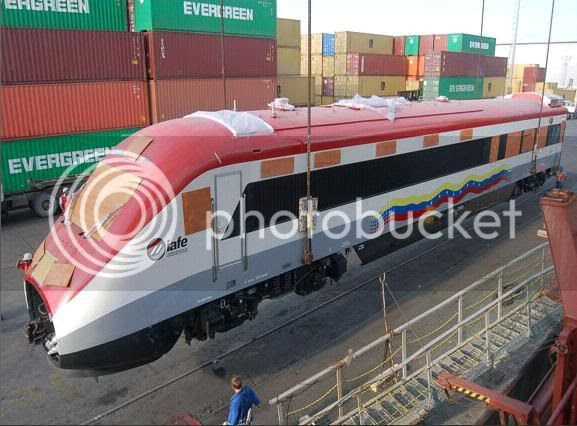 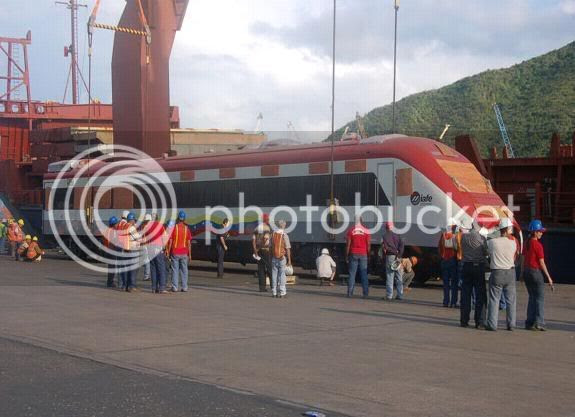 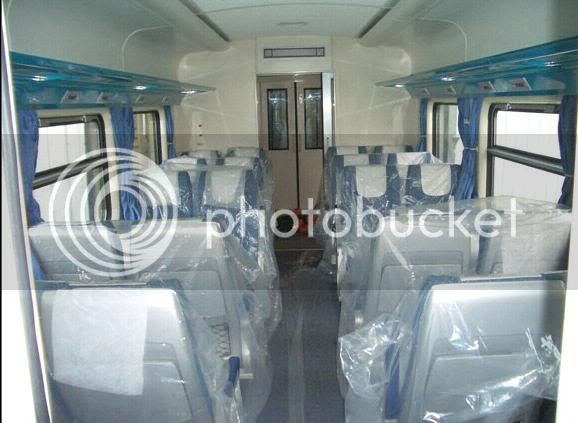 The new rail line which these trains will be running on is the Barquisimeto- Puerto Cabello line which links the industrial central-west region of the country with one of its largest port. That line is the green one on the left side of this map: 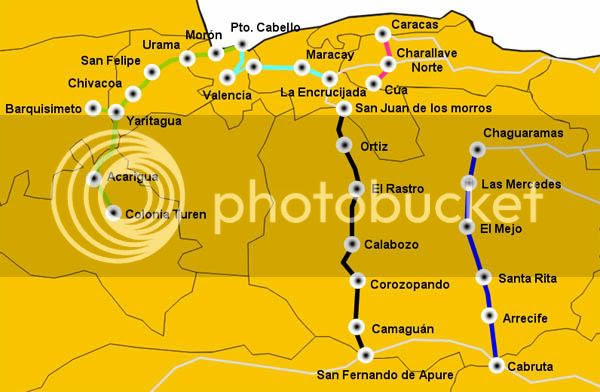 It's nice to see that while elections come and go Venezuela keeps moving ahead. In point of fact, it is this ability to keep the country moving foward that probably led Venezuelans to overwhelmingly elect him.
|
# posted by ow : 6:02 PM

Chavez in his own words

I thought Chavez had some interesting comments in his press conference from yestersay. Yes, one of the press conferences that he never gives. And given that we often hear others, especially those in the opposition and foriegn media tell us what Chavez supposedly thinks or is all about I thought it would be an interesting change to put down what he said in his own words. So here is some of what he said:

I want to salute the opposition that is responsible and
serious. And to its leaders that accepted results responsibly, at
last. It was about time that they adopted that attitue which responsible
leaders should adopt".

Regarding dialogue with the opposition: "If if it is in the
Constitution and legal order I am open to it, but outside that I am not. I
will always be open to dialogue but not at the cost of my principles of
supporting and affirming socialism in Venezuela. That is not open for
discussion. I also will not sign any pact with elites. The pact of
Punto Fijo will not return."

"Those who voted for me did not vote for me, they voted for the
socialist project of constructing a profoundly different
Venezuela".

"Venezuela will continue enjoying the broadest personal liberties
of political participation, of opinion, of thought, and of
expression".

Regarding the opposition - "They are also part of the
fatherland. They want a better country too, of equality, peace and
complete democracy. I ask the help of all in continueing Venezuela on
route to its great destiny"

"The minority is respected, but the minority also should respect
and accept the rules of the game, and not try to alter them through other
means."

It is not possible, in my opinion, that the opposition be included
in the National Assembly. First, because it is impossible constitutionally
and, second, because in politics you pay for your errors and pay for them
hard. They boycotted the elections and they will pay for their
error."

The meaning of December 3rd

Truthfully, yesterday was fairly anti-climatic. Anyone who wasn’t willfully blind knew who was going to win, and more or less by how much (a certain Oil Wars blog sure seemed to get real close!).

Nevertheless, there are important conclusions to be drawn. So lets go through them.

First, regardless of what some rather dimwitted opposition bloggers have been trying to say polls by serious pollsters are actually pretty accurate. All the main polling companies in Venezuela, even those aligned with the opposition got it right. Only the clearly fake polling firms and the foreign right wing mercenary polling firms got it wrong.

Second, no one in Venezuela is afraid. People openly told pollsters all along who they supported and why – and their votes yesterday served to confirm that. Any notion that it was voters concern about the secrecy of the vote that compelled them to vote for Chavez was blown out of the water as Chavez generally got higher vote totals in states without the fingerprint machines than in states where they were used.

Third, the more Venezuelans see of Chavez the more they like him. Often times after eight years people will tend to tire of any office holder, no matter how good a job they think that person is doing. Not Chavez. His percentage of the vote in this election was HIGHER than in any of his previous elections. That is, as he implements his policies he is getting more popular, not less.

Thugs to the end

Unfortunately the opposition is staying true to form and not accepting their defeat gracefully. Rather they are continueing their thuggish and violent ways. Numerous pro-Chavez people celebrating have been attacked by violent anti-Chavez thugs. This is a picture of one who was attacked in the city of Valencia: 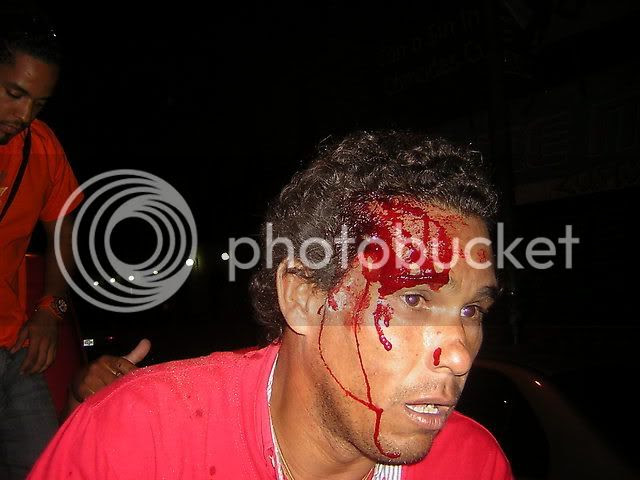 You would think they could let the country celebrate in peace for just ONE day. But clearly they can't, that just isn't the type of people they are.

I really hope we will see the day soon when the opposition will stop doing stuff like this.
|
# posted by ow : 3:44 AM

It is official - the votes are in and Chavez has won an overwhelming victory according to the first bulletin of the CNE:

Finally the day has arrive and as you can see the lines to vote formed in the pre-dawn hours. 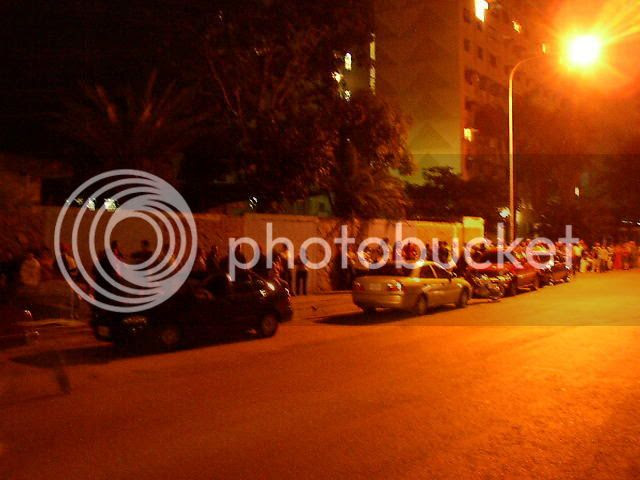 I'll update this post throughout the day as events warrent. Please feel free to ad information in the comments section. The only thing I ask is that you not bite at every rumor. There will be LOTS of them and virtually all will turn out to be unfounded.

Line to vote in Merida 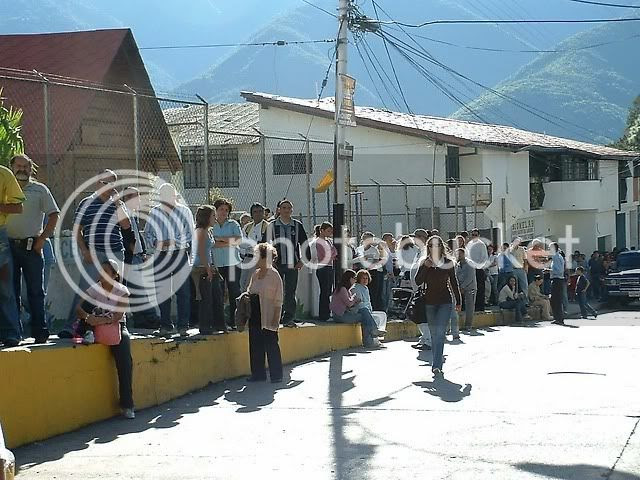 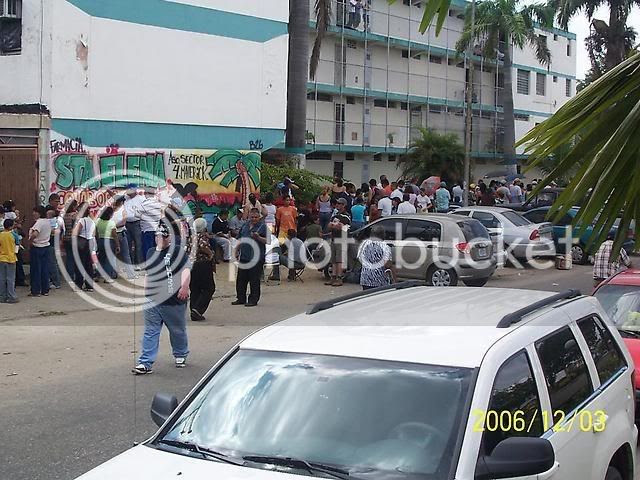 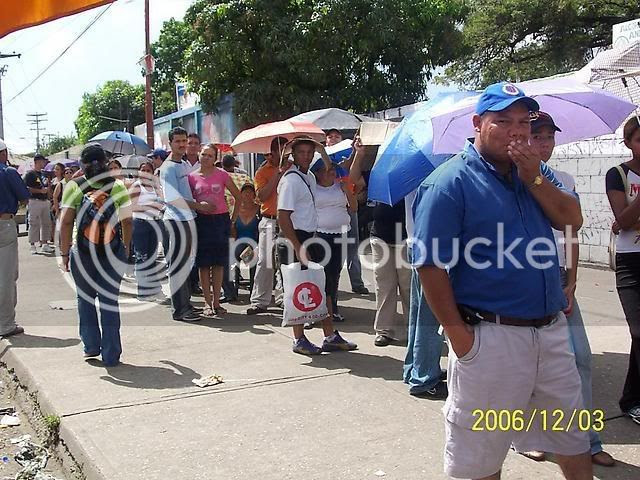 Can you imagine you average gringo in the U.S. putting up with these lines? You have to give credit to the Venezuelan voters who stay to vote - in a lot of places people would just get off the line and go home.

Well this can't be good for the opposition:

This Altamira Plaza is in the wealthiest area of Venezuela and is the opposition's main stronghold. So when the Chavistas are celebrating there it may not be the fat lady singing - but it sure is here warming up to sing. Looks like the lights are about to go out on the Venezuelan opposition. As my grandfather would have said - "no great loss for humanity".
|
# posted by ow : 5:35 AM